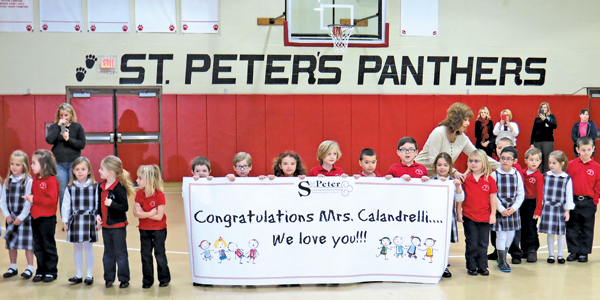 Students and teachers at St. Peter's R.C. School were unexpectedly called into the gymnasium Wednesday morning. When they entered, they saw a microphone stand, chairs and three people ready to take pictures. As they speculated about what drew them from their classrooms, a special guest entered: Sister Carol Cimino, SSJ, Diocese of Buffalo superintendent of schools.

"We are so, so delighted how Sister chose to come to St. Peter's School today, and, yes, it has been top secret," Principal Maureen Ingham told students. "I have had to zipper my lip. I've had to bite my tongue. I've been told by Sister, 'Don't say a word.' "

Cimino was given the microphone and she announced longtime kindergarten teacher Linda Calandrelli is the 2015 recipient of the Sister Lucille Socciarelli-Father Joe Sturm Award, also known as the "Making a Difference Award."

The accolade was created and funded by late NBC News "Meet the Press" host Tim Russert in 2001, in honor of his eighth-grade Catholic school teacher and pastor in Buffalo.

Cimino read a letter that stated, in part, "Recipients of this honor are nominated by the principal of their school and cited as an example of a Catholic school teacher who truly touches the hearts of students, parents and the school community."

She told Calandrelli, "Your 40-plus years in Catholic education - particularly your 40 years at St. Peter Roman Catholic School - have been a gift to the children whose lives you have influenced. As a kindergarten teacher, you have had the opportunity to mold young lives as they begin their Catholic school experience."

Calandrelli has taught three generations of students, including this writer. Additionally, she has served St. Peter's as a Eucharistic minister, religious education teacher, Catholic Charities volunteer and assistant principal.

"In short, you truly exemplify what it means to be a Catholic school educator," Cimino said. "You can take great pride in your accomplishments, Linda, and the Diocese of Buffalo is extremely grateful to you for your outstanding service."

As Cimino finished reading the letter, kindergarten students unfurled a large banner that read "Congratulations Mrs. Calandrelli. ... We love you!" Some of the children presented Calandrelli with flowers and offered her hugs.

"How many of you have had Mrs. Calandrelli as your teacher?" Cimino asked the audience. As hands went up around the room, she said, "Look at you. The whole school, just about. Well, you've had a great teacher. Isn't she wonderful?"

St. Peter's pastor, the Rev. Msgr. David G. LiPuma, said, "We want to thank Sister Carol for coming today; for making this great announcement for our beloved Mrs. Calandrelli. This is very, very special. As the sister read from that letter, only one teacher gets this award (out of 1,000 teachers in the diocese).

"(Mrs. Calandrelli is) exceptional in every way. ... I've only known her over the last year and a few months, and I can raise my hand already and say that she taught me an awful lot about love and compassion, and about being a very, very dedicated teacher."

Calandrelli said, "The first day I stepped foot in St. Peter's, I knew this was my home. My home away from my own home. And all of you have made that possible for me. And you are all my children. I have loved each one of you throughout the years."

She said the greatest honor is watching students continue their education at St. Peter's and eventually graduate from the elementary school.

Students and faculty continued the celebration with cake and cupcakes in the school cafeteria before returning to class.

Calandrelli will receive the award during a presentation at the annual diocesan gala, Thursday night, Jan. 29, at the Buffalo Niagara Convention Center. The event is titled "GALA 22:6 - A Celebration of Catholic Education," and is inspired by Proverbs 22:6.

Russert hosted the first gala and, until his death in 2008, sent in a video message in the years that followed. Cimino said his son, Luke, now "sends in a video every year at the dinner, just to say, 'Thank you for doing this in memory of my dad.' "

The event is a fundraiser for needs-based tuition assistance within the diocesan school district. For more information, or for tickets, visit The Foundation of the Roman Catholic Diocese of Buffalo website at www.frcdb.org. 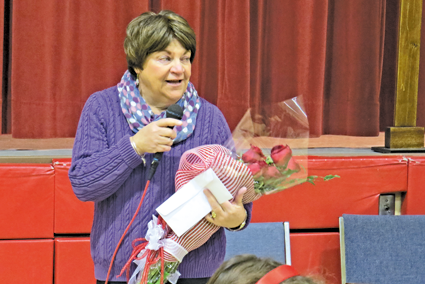 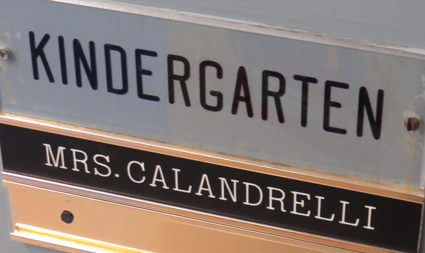 A familiar site at St. Peter's.