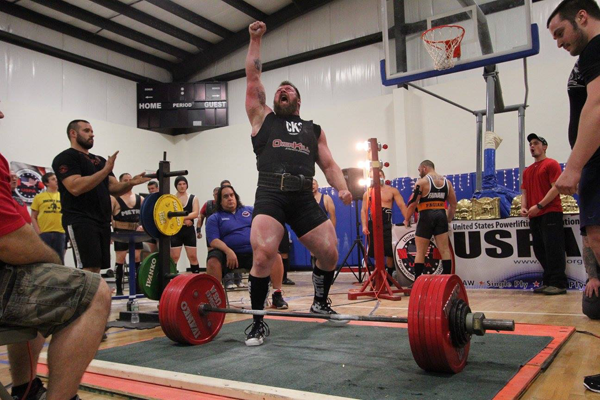 Wheatfield's first ever powerlifting competition probably won't be its last, judging by the warm reception at last month's championship.

St. James Church on Niagara Road in Bergholz was the venue for the 2014 New York State Powerlifting Championships held Saturday, Nov. 15. In previous years, the meet was held in Niagara Falls.

"The turnout was much bigger than I ever expected," said event organizer and USPA New York State Chairman Adam Ferchen. He said there were 85 lifters, and "probably at least double that in spectators."

Ferchen said there were multiple state and national records set at the competition, including a deadlift record broken by Niagara Falls native Paul Emmick, who began competing five years ago. The November competition was his first in a year, after he had some injuries.

But for Emmick, the lift was about more than the record, or getting back into the sport.

"That was a very, very important lift for me," he said. "I had an uncle who had passed from cancer last year who served in the Navy in Vietnam. He was a very big, very strong guy, and through the time that I'd been training he always said, 'when I was in the Navy, I could deadlift 750 pounds. And you might think you're strong, but until you can lift more than I lifted, you're not that strong.' "

"Even on the night that he passed, he didn't let me forget that," Emmick said. "(He said) 'I know you're training, I know you have competitions; don't forget: I lifted 750 pounds. You know what you have to do.'

"So this 755, on top of breaking the record, which was great - that was a lift that was dedicated to my uncle. It was the most important lift I've ever done."

Emmick said he was grateful to both his friends and the people who spotted him at the meet, because without them, he wasn't sure he could have done it.

All of the lifters at the championship were from the Western New York region. There were only slightly more men than women lifters, with about 45 of the former and 40 of the latter. There were six judges, including Ferchen. Another of those judges was Dennis Brochey, Town of Lewiston supervisor and Ferchen's predecessor as USPA chairman.

"I think he (Adam) did very well," Brochey said, adding that he liked the new venue. He also said he was surprised at how many women the competition drew, as his own competition, the annual Red Brick Bench Press to support military families, usually sees about 120 men and only about 20 women competitors.

One of the women at the championships was Gina Bataglia from Niagara Falls. She got involved, both in powerlifting and the state championships, because Ferchen is her personal trainer. She said she thought the event went well, even if she didn't perform as well as she'd have liked.

"I was close to what I wanted to be, but I didn't quite get there," Bataglia said. Of course, there's always next time, and she said she planned on joining Ferchen's next competition as well.

"I think Adam put on a really good event, and I'm excited for the next one," she said.

For his next competition, Ferchen said he might make some changes. The state championships began at 10 a.m. and lasted until about 9 p.m., which was longer than most meets.

"It was a very long day for everyone; that was the only piece of negative feedback I've gotten," Ferchen said. For the next meet, he's considering splitting the day into men's and women's sessions, because "that way, not everyone has to be there all day long, other than myself."

Ferchen said his next competition will be an ironman, or deadlift and bench press, competition. He hopes to run it in February, possibly at St. James again. With the addition of the Red Brick Bench Press, which Brochey said he plans to continue running, the region could be looking at two powerlifting competitions in one month next year.

While it could be tiring for lifters, it would certainly draw some attention to the sport in the area, which is one of the goals Ferchen set out to accomplish when he became state chairman.

"I'm excited and very happy to see how the powerlifting community is growing in New York state," he said.