There will be extra toys for kids and food for families seeking assistance at Community Missions this Christmas if Town of Niagara businessman Mike Nash and his family have anything to say about it.

The second annual Mike's Motor Service Plus Christmas Bash will be held from 5 to 9 p.m. Sunday, Dec. 14, at the Original Honey's, 6560 Niagara Falls Blvd., Niagara Falls.

Gain admission with new, unwrapped toys or nonperishable food items. Cash donations also are accepted. All proceeds go to the Niagara Falls mission, which, since 1925, has provided food, shelter, clothing and caring for those in need.

"For us, especially this time of year, that kind of support and generosity allows us to support the many families and children that come to us," said Andrea Gray, Community Missions events and volunteer manager. "We can only do it because of events such as this."

Once the weather gets cold, the shelter is full all winter, and the number of families seeking food at the mission kitchen increases. Many patrons are single parents or cannot find work. "They're struggling to make ends meet," Gray said.

This is the second year Nash has sponsored the Christmas Bash. Last year's event was only about four months after he took over as owner of the former Richards Motor Service on Sweet Home Road. The relationship with the charity organization grew out of the fact his business services the Community Missions' fleet of vehicles.

"Now it is my turn to give back to the community and to my loyal customers," Nash said.

His whole family is involved in preparations and will be helping out at the bash, including his wife, Krysty, and children: Jada, Arianna, Taylor, Zach and Memphis. Honey's, run by Larry and Kim Pacifico, donates the event space, food and beverages. Kim is Krysty's mom.

Not only does the bash assist Community Missions, but it's a lot of fun, Nash said. Participants will enjoy a buffet of Honey's food, beverages and music, and will be able to bring their kids to visit with Santa. To raise extra funds, a basket auction (a sheet of 25 tickets for $10), a 50/50 drawing (15 tickets for $5) and a full cash bar will be available.

Last year's Christmas Bash brought in eight large bins stuffed with food and toys, plus $500 in cash donations for Community Missions, and an assortment of winter hats and gloves. Nash is hoping to increase everything this year. Those who can't make it to the bash can drop off toys and food at bins at the garage, 5000 Sweet Home Road, until the week before Christmas.

Gray noted Community Missions, at 1570 Buffalo Ave., is open 24 hours a day and seven days a week. Call 716-285-3403 or visit www.communitymissions.org for information about making donations or a wish list of items that are needed.

Nash has been promoting the bash among his customers and on his radio show, "Mike Nash's Motor World," at 8:30 a.m. Saturdays on WJJL.

"If you're going to go to one party this season, make it this one. It's for a great cause," Nash said. 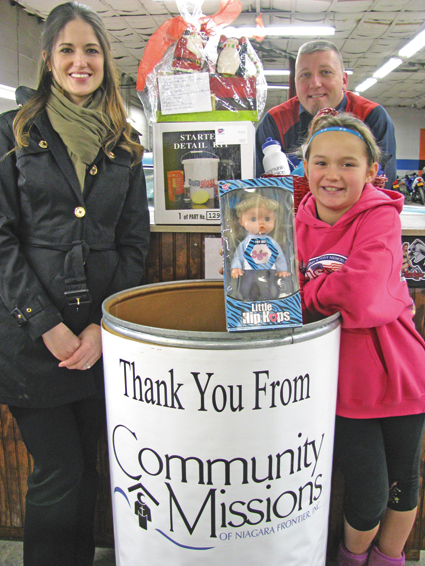 Shown, from left, at Mike's Motor Service Plus with one of the food and toy collection bins and some of the baskets dropped off at the business for the basket auction are Andrea Gray of Community Missions, 9-year-old Jada, and her father, Mike Nash. (photo by Susan Mikula Campbell)