Reconfiguring a potential fast food restaurant might be the key to a new plaza on Center and North Eighth streets in the Village of Lewiston.

Ellicott Development CEO William Paladino met for a second time this month with the village's Planning Board Monday. Also in attendance at the work session were members of the Zoning Board of Appeals and Village Board of Trustees. After debating what it would take for Paladino's proposed plaza to gain approval, elected and appointed leaders seemed to favor connecting the west side building to Center Street.

Paladino's property steeply slopes down hill to Onondaga Street. It was suggested the west side building, which is slated to house a McDonald's Restaurant, could cantilever to Center Street. Patio seating could be installed outside, while a drive-thru could exist underneath the unit's bridge or Center Street section.

Former Village of Lewiston Clerk Anne Welch, now serving as a consultant to the Planning Board, proposed the idea.

"I can ask (McDonald's) for that," Paladino said.

"That would keep you on grade, and the drive-thru window would be undercover," Welch said. "It would still work. (On) Center Street, you wouldn't have that big drop and be looking at a roof. You'd be looking at a building."

"That would certainly remove one of the biggest problems," Planning Board Chairman Norm Machelor said.

"Let me see how that works," Paladino said.

At the start of the session, Machelor said, "It's not for the public. No comments (will be taken) from the public. Only comments from people who are in official positions."

"We're not taking action tonight. ... We're not voting on anything, and we're not accepting something as a submission," he said. "The purpose of this meeting is for people to express their pluses and minuses about this project."

Paladino presented his concept to the village officials who had not attended the previous meeting.

"We've looked at a lot of ways to redevelop this site," he said. "We've talked numerous times about placement of buildings, sizes of buildings."

Machelor told Paladino the plaza idea has elements "that require more than variances. (They) require that we actually don't follow our master plan (in terms of the village's intended walkability)."

Drainage is another key issue. Machelor said the property, as is, has "a lot of soft (ground space)" for runoff. Building a plaza there, he said, "is going to change it" to a hard surface.

"We can accommodate storm drainage," Paladino said. "There's a number of different ways to do it."

"Drainage - it's a problem here," Paladino said. "Obviously, it has been a problem for many years in this area. That was my understanding. We can accomplish this on site. We've done it many other places."

"My concern with that is not that you guys are not prepared for that, but is whether or not our system is going to be prepared for that (extra level of usage)," Planning Board member Loretta Frankovitch said.

ZBA Not Pleased with Progress

"The first proposal you brought to us, we (gave) you our concerns over that proposal," he said. "Now you say you took 24 months to redo it. You didn't address our concerns at all. You still have buildings below grade, which was our biggest (concern) to begin with. And all you (did) was triple the use of the property. I don't understand why you didn't address our problems?"

Paladino said he and his team members have reviewed the code and "we're trying to make the best of a very difficult site."

He said it's a challenge mixing national and local tenants. The former pay rent sufficient enough to allow the latter to exist on site, but have strict requirements for placement and visibility. The site's topography makes building even more difficult.

Planning Board member Ernie Krell said the project would be "a big asset to the village."

ZBA member Peter MacLaren told Paladino, "With all respect to your ability of developing, this village is more or less taxed to its limit in almost all aspects of this size of development. ... I just don't see the need in the village for something of this size."

Ritter expressed concern about the variances Paladino would need to obtain permission to build a plaza.

"I think everybody's biggest concern is that it doesn't follow the master plan," Frankovitch said of the plaza.

Machelor said it would be difficult for the Planning Board to advocate for variances when the majority of members don't favor the current proposal.

"It's hard to go to them now and say, 'We got a plan we don't like. There's not enough parking there. But we're still going to ask you for a variance.' They're going to say, 'What are you, nuts? We're not going to do that.'

"We haven't got past the point where we can find something we're comfortable with to send it off for multiple variances."

"We're not against what you're trying to do," Ritter said. "I would like to see it. But the village lives by our code."

"Variances are within reason," he added. "Not like this. This is too much."

Paladino is expected to return with a revised plan in January.

What you need to know about this Lewiston project:

•Paladino has yet to put forward an official first submission. To date, he has had about a half-dozen informal meetings with elected and appointed leaders. Some favor his idea, but not the current proposal. They want to maintain a "walkable community," and are unlikely to approve a plan that has a below-grade building with a visible rooftop (as is the case with the west side fast food unit). If Paladino adjusts that unit, it's likely the boards will work with him on other variances.

•The development is about 100 parking spaces short of what's required for a project of this size. The plaza's north side would require additional usage variances. 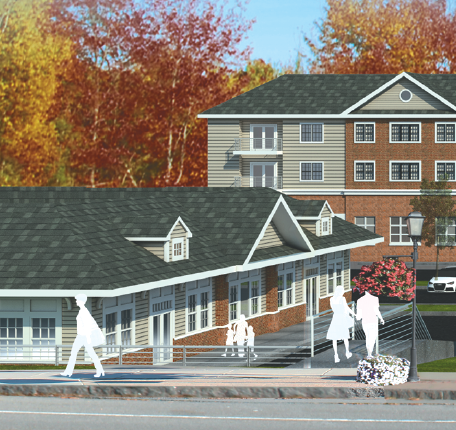 This front, west-side building is the sticking point in William Paladino's plaza proposal. Elected and appointed leaders do not favor passersby viewing the top of a building. (Artist's rendering)