•Taken from the Nov. 21 Island Dispatch

Despite not having an auditorium in which to perform because of the school district's $50 million capital project, the Spotlighters drama club at Grand Island High School made the most of a difficult situation by holding one-act plays in the school cafeteria and at Sidway Elementary School.

As renovation of the GIHS auditorium continues, Spotlighters performed free shows for children in the high school cafeteria Nov. 14 and Nov. 15.

"Due to the auditorium being under construction, we switched the schedules," said Spotlighters president Jessica Ackendorf. "We were going to do one-acts like we did last year, but instead, the directors had a good idea that if we did these shows for the kids, it would be a really great way to get out in the community. And I think they'll be really cute to perform them for the kids during school."

Plays included "Tacky the Penguin," "Goldilocks," "The Very Hungry Caterpillar," "3 Little Pigs," "Where the Wild Things Are" and "Alexander and the Terrible, Horrible, No Good, Very Bad Day." 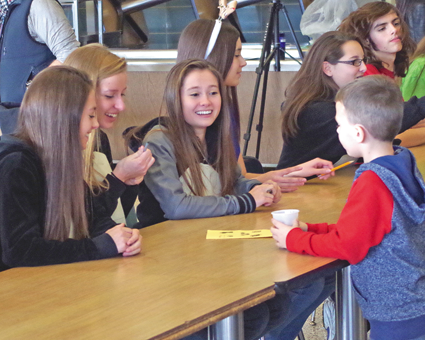 The show Saturday included autographs and sing-alongs for children between acts. (photos by Larry Austin)

Schedule conflicts because of the auditorium construction have cancelled the Connor Middle School spring musical. At the high school, the show must go on, and Spotlighters learned that found spaces have been a part of theater since its inception.

"It does make me a little sad because we always did the play in the fall, and I looked forward to that," Wynne said. "But we make the most of it."

"At the same time, I think having the one-acts when they were gave us a unique opportunity," Ackendorf added. "I don't know if we would have done the Sidway thing in the spring. I think it was neat that we could do that with them."

"It's fun when you have different community members instead of just some of your friends," Wynne said.

Rehearsals for "6 Tales for Tots" began in mid-September with high school seniors directing and performing under the guidance of teachers Maggie Kennedy, Anthony Giambrone and Amelia Scinta. All the shows were free.

One thing that stays the same no matter where the shows are staged is the bond actors develop in putting the production together. Ackendorf and Wynne have been in the club all four years of high school.

Ackendorf, the club president, said it was exciting to see herself go from joining as a freshman to having a leadership position in the club.

"Really having grown up with these people, you definitely become like a family during the shows, and so now it's nice to take that leadership position and help the others have the same experience that I've had," Ackendorf said.

"You practice with all these people who are strangers, but then over time, over the few months, it becomes such a close-knit group of friends," Wynne added. 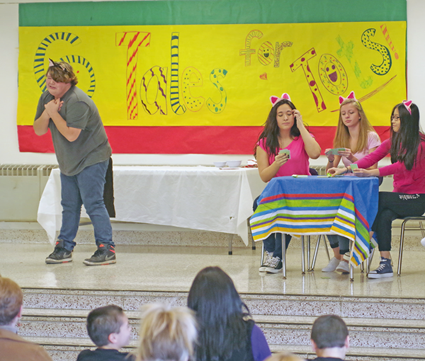 Mick Hughes is the Big Bad Wolf in a Spotlighters production of "6 Tales for Tots."