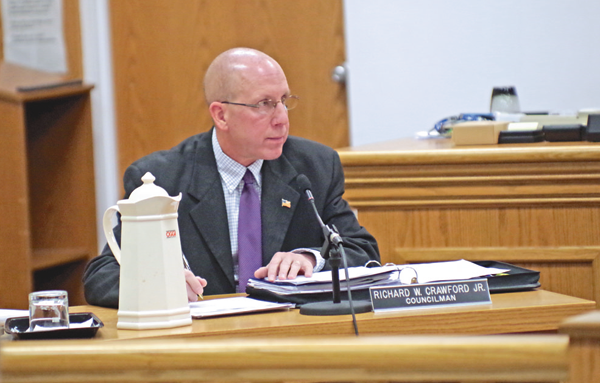 Richard Crawford served his last meeting of the Town Board after 19 years as a councilman. (photo by Larry Austin)

•Taken from the Nov. 21 Island Dispatch

Councilman Richard Crawford resigned his seat on the Grand Island Town Board to become the town's new deputy highway superintendent.

In a memo to the board, Highway Superintendent James Tomkins advised that Donlon had resigned his position as of Nov. 21. Tomkins later said Donlon had accepted a job with the Erie County Department of Public Works Highway Division.

"Joe was a knowledgeable and dedicated employee of the town for 12 years and will be sorely missed," Tomkins wrote.

Tomkins said he brought Crawford on board for his managerial skills and budget knowledge.

"Dick brings a whole different set of skills to the table and I think they'll suit us well at the Highway Department," Tomkins said, adding that Crawford "knows the town inside and out."

The deputy serves at the pleasure of the highway superintendent. Crawford's hiring required no action by the Town Board.

Town Supervisor Mary Cooke said the board will seek candidates to fill the vacancy on the Town Board and serve out the remainder of the term, which ends Dec. 31, 2015.

In closing Monday's meeting, Crawford thanked the public for his long tenure on the board.

"It's been an honor and a privilege to have represented this community for 19 years as a town councilman," Crawford said. "When I look back over those 19 years, I look at a town that has positioned itself in Western New York as probably the most livable place you can imagine."

Crawford's background is in medical sales, however, 19 years of doing town budgets and working with town departments will hold him in good stead in the Highway Department, he said.

"As a councilman, we get a complete education on every avenue of town government," Crawford said. "I just think of this as I'm stepping aside from an overall position to working in one specific department."

Tomkins, a Republican like Crawford, said he didn't pick the councilman for political reasons and didn't seek the input of the Republican committee on the finding a replacement for Donlon.

"Just about all the deputy highway superintendents in New York state are guys that are ready to retire, because they're the only guys that want to step out of the union. So they're typically guys that come from the workforce, they step out of the union for a couple years, bump up their retirement, and they don't really bring a lot to the table," Tomkins said. "I brought Dick on because I think he offers a lot of managerial skills."

Interested candidates for the open council position can email a letter of interest and a resume to [email protected] or mail to the attention of Supervisor Mary Cooke, 2255 Baseline Road. Letters and resumes received by 5 p.m. Friday, Dec. 5, will be considered.

Crawford said he would begin work Nov. 22, "Where, yes, I will be on snow watch."