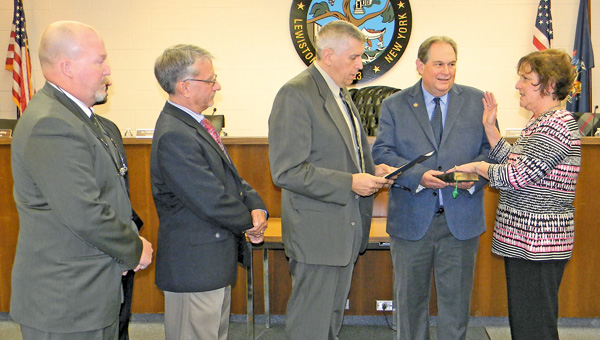 Newly elected Town Councilwoman Beth Ceretto was sworn-in Monday by Town Councilman Ron Winkley as Supervisor Dennis Brochey and board members look on. Holding the Bible is her husband, John, a former Lewiston councilman, now assemblyman for the 145th District. At right, she receives congratulations from the group.

Discussions continued, agreements were ultimately reached, and the Lewiston Town Board at last reached consensus Monday on finalizing its 2015 $16.037 million budget.

It brings no town tax, save for special districts, but it does bring some relief for Highway Superintendent Doug Janese - namely assurances that all town Highway Department operations would continue to be fully funded, from leaf and brush pickups to paving to snow plowing, and that all associated costs, including overtime, will be addressed.

"I've been spending a lot of time with Mr. Janese and the Town Board," said Town Councilman Al Bax, who serves as liaison to the town Highway Department. "I've been very patient" to all highway needs and concerns.

Leading off, Bax offered assurances that all town highway snow plowing costs, from personnel to equipment, salt purchase needs to overtime, would continued to be fully funded. Coming off a very hard winter last year and the resulting demands it placed on the highway budget, all have been a thorny issue in board discussions with Janese over past weeks.

"I'm very reluctant to underfund the Highway Department in a situation where they provide certain services that are imperative to public safety," Bax said. "What I'd like to do is ... try to fund the department without putting us in jeopardy, but also to provide some flexibility."

With that and agreement from Town Finance Officer Paul Kloosterman, Bax presented a plan that now sees over $75,000 in new funding for overtime for snow plowing. It resulted from a transfer of $55,000 from the highway paving account to the highway general repairs personnel/contractual account and $22,000 added on top of that from other unspecified sources. "I want make it perfectly clear, the services are not going to suffer," Bax said.

"It doesn't change the overall budget," commented Councilman Ron Winkley, adding his support. Both councilmen said when the need presents it, the town will adjust the highway paving funding account next year.

With the approval, the entire highway personnel account totals $898,560, plus the overtime expenditures.

Thanking the board for its backing, Janese said, "If there's emergency spending, we're going to have to find it. ... We'll do the best we can with what we have."

They agreed to continue the town's leaf/brush pick-up services for Lewiston residents as usual. No changes are planned, but both the board and Janese were in agreement that a better arrangement needs to happen in the future. "We want residents to be assured they're going to get the services they've been getting," said Bax, who added that he, like Janese, has also been on the receiving end of numerous complaints by residents.

Winkley reiterated, however, that changes need to happen. "We need to come up with some better type of schedule. I know that people are used to getting it done; the services are not going to be cut, but they need to be done more efficiently," Winkley said, suggesting Janese break up the highway leaf/brush pickup schedule into specific areas of the town to make it more practical.

To that Janese replied, "We will be looking at that next year."

Other highlights from the budget include: a 1.5 percent raise for all non-union employees, with a total impact of $20,834 to the budget; the restoration of $1,000 in funding to the HART Interfaith agency; and adjusting the town attorney's personnel account line to $69,000 - the same amount funded as last year.

On a motion from Winkley to accept the budget plan as presented, it passed unanimously.

Kloosterman said that all adjustments/changes to the budget mean an increase of $33,393 in overall general appropriations. But, he added, Lewiston continues its distinction of having no town tax.

•The session opened with the swearing-in of new Councilwoman Beth Ceretto. Ceretto, who is filling the seat vacated this summer by the resignation of Mike Marra, won her office last week and will serve for a three-year term.

•Following a lengthy discussion, the board reached an agreement with Dan Kilmer, a former Dana Drive resident and town councilman, to allow for an interpretation of town code that requires an operational sump pump at the time of a house sale, and enable Kilmer's pending sale of his property.

Kilmer contended that his former residence, built in the early 1950s, did not require a sump pump at the time of construction and that his having to abide to a town code adopted decades afterword would require a pricey installation on his part to conform. Following discussion among board members, Town Water Pollution Control Center Administrator Jeff Ritter, Town Engineer Bob Lannon and Deputy Supervisor Sean Edwards, an exception to the code was approved to allow for the sale. The town determined that, because Kilmer's property did not have a foundation drain in the first place, there would be no need to have a sump.

The measure went on to be approved unanimously, which allows the town water/sewer department to sign off on the sale. The board also indicated it intends to readdress the questionable areas of the town code pertaining to sump pumps.

•The board accepted the resignation of Board of Assessment Review member Paul Bencal and approved the appointment of new member Andrew Nichols for a five-year term, from October 2014 to September 2019.

The board also accepted, with regret, the resignation of Lewiston Police Justice Clerk Lisa Rizzo effective January 2015. Winkley, a former LPD chief, praised Rizzo for her 16 years of service to the department. "She will be missed," he said.

•The board passed a resolution to pursue $25,000 in funding from the Greenway Standing Committee for acquisition of a new electronic sign for Sanborn.

•Kloosterman requested and was approved to pursue an expansion of the town's online bill pay program on the town website, which is now available for water bill payments. Kloosterman wants to expand its usability to cover other town payments, including those for permits, licenses and fees, even taxes. "It's a step program," said Kloosterman, saying that others will be added in the future. "It streamlines operations," he said.

•The board, on a request from the town clerk's office, approved a change in the Christmas holiday employees schedule from Dec. 24-25 to Dec. 25-26. It would cover the clerk's office and other town departments, including those with unions, providing that union approval comes with a signed memorandum of understanding.