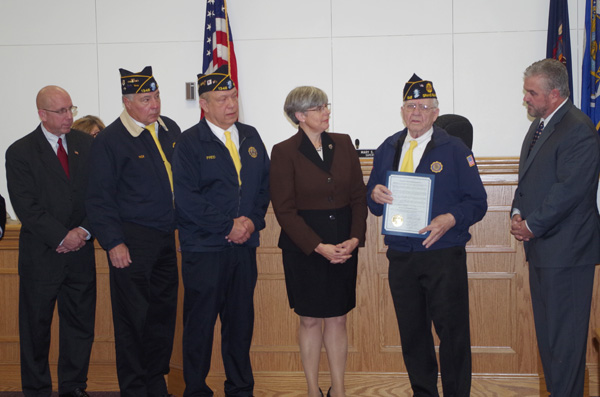 •Taken from the Nov. 8 Island Dispatch

The Grand Island Town Board at its regular monthly meeting named November as American Legion Membership Month across the Island.

The board issued the town proclamation and noted the American Legion "promotes and encourages Americanism and scholarship programs." In making the proclamation, the board noted Grand Island Post No. 1346 - chartered April 24, 1947, and reactivated Aug. 23, 2001 - "has become an active veterans post and a community asset on Grand Island," and urged "all eligible veterans and service members to join the Grand Island Post No. 1346 American Legion, especially during this month-long membership drive."

American Legion information is currently on display in the Town Hall.

Pictured, the board presented the proclamation to Joe Synakowski, membership assistant for Post No. 1346. "Last year we picked up a few members," said Synakowski, also the Post No. 1346 judge advocate. "We're very grateful to the town for sponsoring us and allowing us to put a display downstairs, and if anybody knows a veteran that is willing to join us, we have a nice group of people and we try to help our community."