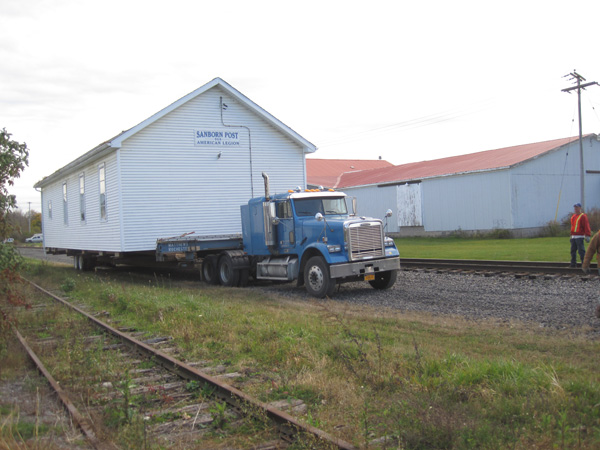 The building in transit.

At 10 a.m. Wednesday, Oct. 29, the 47-ton legion building in Sanborn was moved from its longtime location on Pearl Street to the Sanborn-Lewiston Farm Museum, 2660 Saunders Settlement Road.

Research shows that this historic building was built in 1825-26 on a lot just south of the late John and Mildred Folmar's home at 5050 Townline Road located by the present Pekin Cut. It was built for use as a meetinghouse of the First United Society of Methodist Episcopal Church of the towns of Lewiston and Cambria, which formed in 1824, when Pekin was known as Mountain Ridge. Documentation shows that the trustees sold the building to Philedus van Slyke on June 19, 1856.

This was about the time that the new stone Methodist Episcopal Church (now the Hope United Methodist Church) was constructed at the corner of Grove Street and Upper Mountain Road in Pekin. Both D. G. Beer's maps of 1860 and of 1875 show the Presbyterian Church on this lot.

A decision was made to secure the old wooden structure previously used as the early Methodist Church and later as a Presbyterian Church in Pekin. The steeple was removed and the building was moved to 866 Pearl St. in Sanborn. The building was called the Sanborn Union Hall.

Records show that, in 1875, a lot on Pearl Street where the structure was placed was purchased from Lee R. Sanborn by the Sanborn Union Hall Association. According to church records, the First Methodist Episcopal Church of Sanborn was organized on Feb. 8, 1868. Prior to the time that their new church was dedicated on Sept. 20, 1874, they initially used their homes and then used the Sanborn Union Hall until their church was ready.

This would mean that the building for the Sanborn Union Hall would have been moved on location prior to the 1875 date shown on the search records. The search also shows that the Reformed Mennonite Church of Williamsville owned the building for 48 years from 1888, when they purchased it from the Sanborn Union Hall Association, until they sold it to the First Baptist Church of Sanborn in 1936. Gertrude M. Kline purchased the property from the Baptist Church on June 12, 1940.

After the Sanborn American Legion was gifted the structure from the estate of Gertrude M. Kline in 1953, they had the front steps removed and extended the building 16 feet to house a kitchen and restrooms. This addition had a cellar under it to accommodate a furnace and a side entrance at grade level with steps inside leading up to the meeting room. The Legionnaires operated the building as a community hall, providing a meeting place for their members, as well as for community and family functions as the need arose.

In 2012, the Sanborn American Legion Post 969 met with the Sanborn Area Historical Society and worked out an agreement to donate their property to society. After 59 years of ownership and the aging of their members, the Legion decided that it was time to downsize.

After two years of planning, the move was performed by Matthews House Movers of Rochester. Jay Wendt Construction of Sanborn poured the foundation footer in preparation for the move. The addition of the church steeple at the front and leveling of the floor at the rear will take place later. This will allow us to convert the front to look like a church as it was in 1825, and the rear to a museum with exhibits of remembrances of Sanborn, including Sanborn men's involvement in the Civil War and other wars.

The historical society received $175,000 to fund this project by a grant from the Town of Lewiston. This was from money received by the town as part of the re-licensing agreement with the Power Authority, and was authorized to be used on this project by the Greenway Commission.

We are fortunate to be able to save this historic building that has serviced five churches and numerous civic groups over the past 189 years. 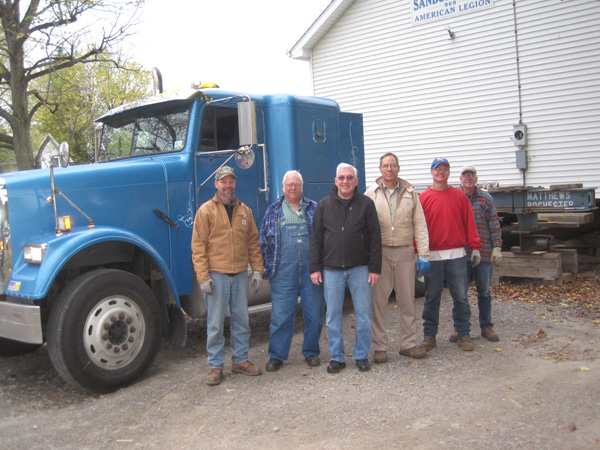 Matthews House Movers and Bill Sterner, chairman of the project (third from the left) start the move.