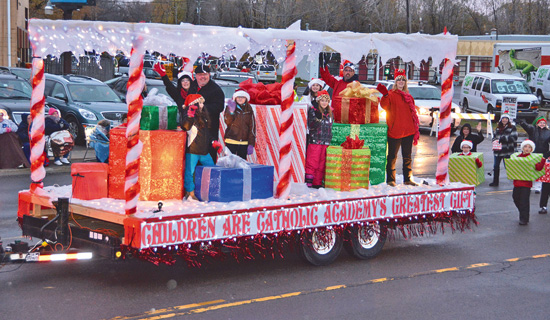 Military Road was filled with lights and music Saturday, Nov. 1, as the Town of Niagara conducted its annual Electric Lights Parade.

"Turnout was wonderful again," said Deputy Supervisor Sylvia Virtuoso. "No matter how bad the weather is, each year we always have a couple thousand people show up."

The event began at 5:30 p.m. with country singer JB Aaron singing the national anthem. Virtuoso and WBBZ-TV host Bob Koshinski were the co-masters of ceremony.

The parade kicked off with a mini-escort steered by Katelyn and Madison Suitor, daughters of the town's police chief, James Suitor. The town's police department and Niagara Active Hose Fire Co. were among the many participants in the parade.

Other participants included entertainment such as Adell's School of Dance, the Niagara Falls High School marching band, the Iroquois Indian Band, and Niagara Clown Alley; public service departments from across Niagara and Erie counties; and community groups such as Lions and Kiwanis clubs.

"The food collection was amazing and the crowd's unbelievable, knowing that our weather every year is horrible," she said.

Despite the weather, the evening became a memorable one for James Strassburg of J & J Trucking, who proposed to his girlfriend during the parade.

More memorable for the children, perhaps, was Santa Claus's appearance at the end of the parade. He also visited the party held at Niagara Active Hose on Lockport Road after the parade. Children were able to take pictures with Santa, and pizza and refreshments were served.

Parade entrants were judged by the NY-Penn Judging Association, and winners received plaques. The winners were: