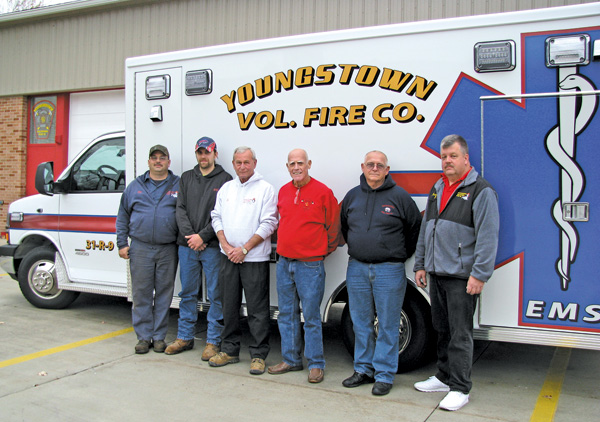 Anyone who's ever wondered how donations to the Youngstown Volunteer Fire Co. are spent or where money raised at the annual Field Days goes should take the time to stop at the firehall Sunday, Nov. 2.

The fire company is inviting the community for a light lunch starting at noon followed by the dedication of its new 2014 Lifeline ambulance at 1 p.m. Participants also will have a chance to tour the firehall, look at the Youngstown company's other equipment, and ask members questions.

Youngstown Volunteer Fire Co. Trustee and Past President Greg Robertson Sr. said the new $145,000 ambulance has replaced the former 13-year-old ambulance that had 70,000 miles on it and had responded to approximately 4,000 calls.

"Everything was done by donations. No tax money was used," he said.

About $35,000 came from corporate donations, $65,000 from Drive for Life public donations, and $45,000 profit from fire company fundraisers such as the field days and sportsman's raffle.

"The $145,000 cost was for ambulance only; we were able to purchase needed replacement equipment over the past few years and have it installed in the new ambulance," Robertson said. "Some of that equipment includes a 12-lead AED for $26,000 in 2009, a Striker stretcher and stair chair for $12,000 in 2010. This equipment was also purchased with donations from the community."

The new ambulance was delivered just after Labor Day and is in use. Sunday's dedication was planned, Robertson said, "because we wanted the community to see when they send a check in where their money goes."

The fire company intends to run a yearly drive to support its ambulance service.

"Our goal is to raise between $20,000 and $25,000 each year, which will allow us to purchase supplies and replacement equipment as needed, and have enough left to purchase a new ambulance in 10 years," Robertson said, noting that, by then, the cost of a new ambulance is estimated to be about $175,000. "We found that the useful life of an ambulance is 10 years. Once we were over 10 years with our old ambulance, we found that maintenance expenses and reliability became a concern."

Robertson, who also is Niagara County Fire Advisory Board secretary and a Niagara County Volunteer Firemen's Association past president, said Sunday's ambulance dedication also could have another benefit in that someone who stops by to visit might decide to join and volunteer his or her services. The fire company is always looking for new members.

"A lot of younger members stay for four-five years, and then they move out of town for new jobs," he explained. "It's not like days of past when they would get a job at Harrison or at one of the plants in the Falls and stay in Youngstown their whole lives."