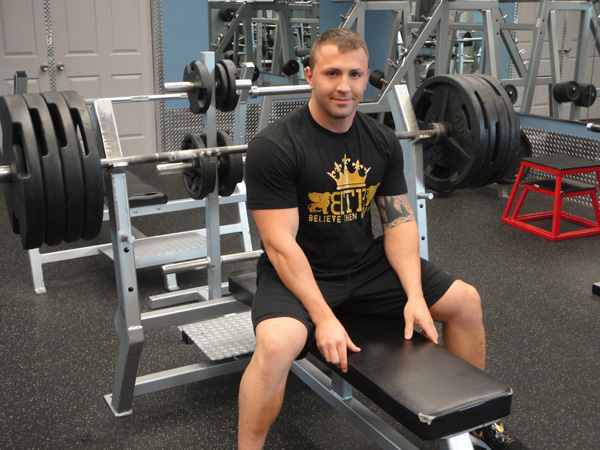 Adam Ferchen is the new person in charge.

Bergholz will soon be home to the Town of Wheatfield's first ever powerlifting competition, thanks to the efforts of a local athlete.

In previous years, it was held in downtown Niagara Falls. The change this year comes from Ferchen's new role as state chairman, taking over for Dennis Brochey, who retired in January in order to become Town of Lewiston supervisor. Brochey, who has been a powerlifter for about 20 years, personally recommended Ferchen for the chairmanship.

"Adam is one of the strongest guys in the state for his size, plus his heart is in it and he's got a good following from his gym," he said. "I just thought Adam would be a good fit for it."

Ferchen chose St. James both for its lower rent price and because he is a member of the church. Brochey said he thought the new location could attract local athletes.

"It'll be a good fit for the powerlifting community," he said.

The Bergholz competition is just one part of Ferchen's plan to expand the powerlifting community throughout the state.

"I'm trying to just get more locals around here," he said. "I've been going from gym to gym and talking to people, and it seems to be working. I'm getting more people."

But the community is still growing, Ferchen said. He ran a competition at Mickey Rat's Beach Club in Angola in July, and said it was "the best turnout they ever had." There were 95 entrants total, some of whom were from Toronto, or as far away as Florida, Maryland and Rhode Island.

"I don't know how they heard about it, but news got out there somehow," Ferchen joked.

He said the powerlifting community in New York alone, however, is "bigger than you'd think."

"It's getting more popular," he said. "It's growing every year."

Much of that growth is coming from an increase in women powerlifters, Ferchen said. Of the 75 open spots in the Bergholz competition, he said so far he's received 50 applications, and 40 were from women. The majority of the Mickey Rat's competitors were women as well.

Both he and Brochey admitted they were unsure of where the increased interest from female athletes was coming from, though they certainly didn't oppose it.

"We have some of the strongest women in the country here in Western New York," Brochey said.

Among those women is Rae-Ann Miller, a powerlifter in the 198-pound weight class who broke an American record in September by bench-pressing 402 pounds. Miller, originally from Niagara Falls and now living in Barker, began powerlifting about 12 years ago, joining her husband, who was already involved in the sport.

She had her own suggestion for why women might be getting involved.

"It's just empowering being strong," Miller said. "You get the weight and most people look at it and say, 'I can't do that.' And you go, 'Yea, I can do that.' "

She said her husband currently trains their 14-year-old daughter, and she's happy about that.

"Girls have a bad image of muscles and being strong. They think it's not feminine," Miller said. "I want to show them that you can still be a woman, and womanly and feminine, and still be strong.

Miller isn't currently signed up for the Bergholz competition, though she said she was debating it, based on whether her training allowed for it.

Ferchen, on the other hand, hadn't planned on competing at all after a competition last November. He said he'd been focusing on bodybuilding instead.

"Then I ran that competition (at Mickey Rat's) in July, and I just got an itch for it," he said.

Now, he and fellow N-W graduate Luigi Fagiani, both of whom are ranked in the top 20 for their weight classes worldwide (198- and 220-pound, respectively), are training for the International Powerlifting League World Powerlifting Championships in Las Vegas, held from Nov. 6-9. Two athletes from each weight class will be chosen to represent Team USA, and Ferchen said he hopes they will be chosen.

"This will be my first time competing in anything that big," he said.