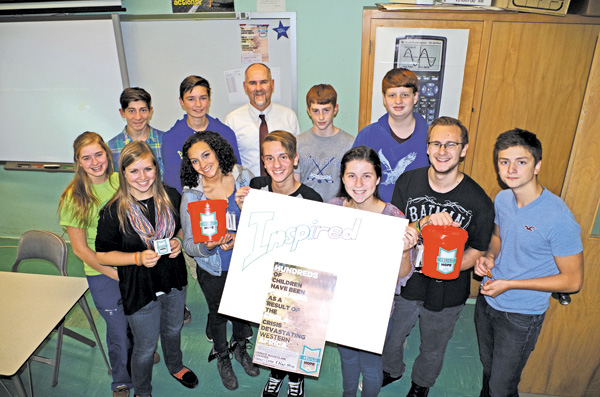 In the month of October, Inspired of Grand Island High School has partnered with Let Them LOL for a charity fundraiser. Along with other Western New York high schools, GIHS will collect donations and raise money for Let Them LOL's "Build Hope" campaign. The goal is to help build orphanages for children in West Africa who have lost parents to Ebola. Pictured is a meeting of Inspired members Tuesday in teacher Dan Sweeney's room.

•Taken from the Oct. 10 Island Dispatch

Grand Island High School is among the schools that are fundraising for West African relief to "Build Hope" in the face of the devastation caused by the Ebola virus.

Inspired, a club at Grand Island High School, is running a fundraising drive to help build orphanages in communities of West Africa, where victims of the Ebola virus have left behind hundreds of orphans.

Donors can drop spare change in orange construction buckets located in the main office and at the Casey's Corner school store in the Viking Mall of GIHS. (More information on Twitter is found at #BuildHope.)

Inspired member Anthony Ormsby, a junior, said the charity organization Let Them LOL is partnering with schools to raise money to build orphanages with a goal to raise $120,000 for finding housemothers for the orphaned children, and provide the children with food, schooling, and long-term care. Ormsby said every penny counts in the fund drive.

This isn't the first charity drive for the club. Inspired has raised money in the past to help build water wells in Sierra Leone, and its members have also taken a mission trip to Haiti every other year for relief work.

"We always like to do projects where we help out and everything, but this opportunity was really just handed to us kind of on a platter, and it was so amazing," Ormsby said of the Build Hope movement. "We are so thankful for it."

"Almost half of us are going in June to Haiti to build houses and do more relief work down there," Ormsby added.

Ormsby said Inspired is a club "that just likes to have fun and share the word of God and we believe that no one should not be able to hear it and no one should be judged." The club is student led and has about a dozen members.

Hannah Bastian, a senior, has been in Inspired all four years of high school. She said Inspired is a "close-knit" group, and the Build Hope campaign reflects the club's moral compass.

"I believe that as Christians we should be helping and loving others, and so this is a campaign that represents that, represents what we believe," said Bastian.