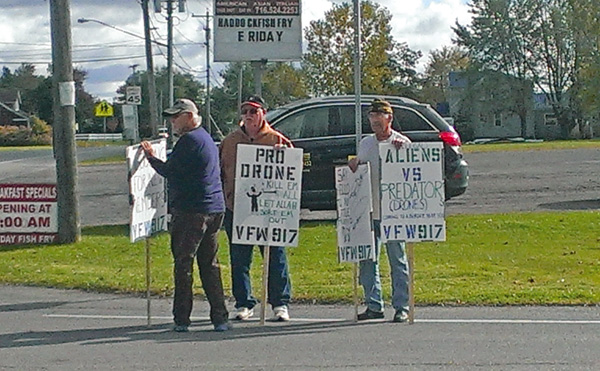 A week after an anti-drone protest outside the Niagara Falls Air Reserve Base, a group of veterans gathered at the site for a different purpose: to show their support of the United States drone operations.

Among those protestors was Air Force veteran Les Carpenter.

"We want to support the drone program overseas," he said.

Carpenter said he believed the drones save American lives and provide jobs.

"People who protest the drones, they've obviously never served in the military, and they've never lost a loved one over there," he said.

Russell Brown, a Vietnam veteran who participated in the anti-drone protest outside the base two weeks ago, disagreed. He said his experience in war is part of why he protests today.

"Being over there, being in it, seeing innocent people killed ... it's affected me ever since," Brown said, adding, "I don't think you need to be a veteran to oppose the killing of kids and innocent people."

Eugene Ashley of VFW Post 917 had a similar opinion, though in his case, he argued the drone program prevented more deaths.

"(The VFW) wanted to me to come out (to the base), so I said I'd be glad to come out," Ashley said. "I want the killing to stop down there."

The number of civilians killed during American drone strikes is difficult to determine, because numbers vary based on which organization is conducting the study. For example, in 2011, New America Foundation reported between three and nine civilian casualties from strikes in Pakistan. The Columbia Human Rights Clinic at Columbia Law School found reports of between 72 and 155 civilian casualties for the same period.

Asked for his opinion on why veterans were split on the issue of drones, Brown said there could be many reasons. He said he thought some veterans only considered the American lives lost important. However, he added some people might not realize the extent of the program.

"When I went into the service (in January of '66) I never really asked any questions," he said. "I don't think people have thought about the ramifications."