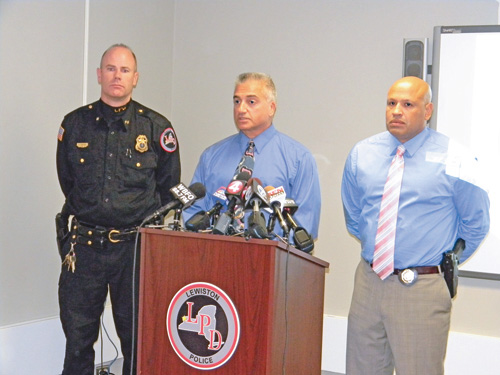 The Lewiston Police Department and New York State Police are broadening their investigation into a kidnapping-sexual abuse complaint that thus far has led to the arrest of a Lewiston man on multiple felony and misdemeanor charges, with more charges possible as new complaints come in.

According to the LPD, State Police and the Niagara County District Attorney's office, the case stems from a complaint lodged by a 24-year-old female victim Sept. 26 while she was a patient at Erie County Medical Center in Buffalo. The victim, who reportedly worked at the Colonie Lounge Cigar Bar and Gentlemen's Club in North Buffalo, alleged she was held against her will and subjected to physical, mental and sexual abuse over an extended period of time.

A lengthy investigation into the woman's complaint led to the arrest on Sept. 27 of Iver Phallen, 67, of 817 Carriage Lane in the Town of Lewiston. Phallen was charged with kidnapping, first-degree, a class A-1 felony; aggravated sexual abuse; coercion, first-degree; obstruction of an airway, second-degree - all class D felonies, along with the misdemeanors of assault, third-degree; unlawful imprisonment, second-degree, and menacing, third-degree.

At a news conference at the Lewiston Police office Tuesday, officers reported Phallen, identified as a retired businessman in the Western New York beverage industry with addresses in Lewiston and in Florida, was being held in the Niagara County Jail without bail. They reported the incidents in question had all occurred at Phallen's Lewiston residence following earlier contacts with the woman and asked for the public's assistance in providing any additional details.

Those came over the course of this week, and on Thursday, Lewiston Police and State Police said more possible victims have come forward and that additional charges may be placed against Phallen.

"Other females have come forward and confirmed contact with Mr. Phallen, (under) similar circumstances," said LPD Police Chief Chris Salada. "We believe there are other individuals out there. This is not an isolated incident. We've had other victims come forth. Our investigation is continuing."

Lt. Kevin Reyes of the State Police Criminal Bureau of Investigations appeared with Salada and LPD Sgt. Frank Previte at the Thursday news conference in Lewiston and added, "We've had a few women who said they had contact. We do believe there are others."

On a question of whether there were similar encounters to those alleged by the victim, Previte said, "Some are similar, but we cannot reveal (those) at this time." He did indicate though that the new allegations were sexual in nature and could have been occurring over a period of time.

Salada, Previte and Reyes all said the complaint allegations by the latest individuals involve Internet contact and suggested a pattern may be unfolding.

"Things have changed; this is not an isolated incident," said Previte, adding that police investigations are now going deeper.

As to a possible pattern, he added, "This is not a time sensitive thing, not one or two months. We are going back further. We're looking for any contact others may have had with this individual. It's not just recent."

"We're looking for any individuals who have had similar circumstances," Reyes said.

Previte said that thus far all allegations - those by the Colonie victim and now by others who have come forward - were reported to have occurred at Phallen's Lewiston residence.

"Most of the activity has occurred in the Town of Lewiston. Most of what we have thus far consists of a pre-arranged meeting," he said.

"But we're not limiting it (the investigations) to this location," Reyes said, adding that with Phallen also having a residence in Florida, "We're not saying it's just this location."

Reyes said the FBI has also joined in the investigations.

Salada and Previte said the new complaints over past days are from possible victims in Erie and Niagara counties. Thus far, none are reported from Canada.

As to whether Phallen may have had different victims - female and/or male - Reyes added, "At this time we are not limiting it to just females. We want to make sure that we are not eliminating anything."

At this point there are no additional charges planned against Phallen, but that could change.

"There are a number of things that are happening at this point," said Previte. "That may change.

"The information that we had in our first complaint, it's similar in nature (to the latest complaints)" he added. "How many? We're uncertain (but) there have been other individuals."

"Based on the additional women and our investigation, we strongly believe that there are still more individuals that have contact with Mr. Phallen and that this was not an isolated incident," Salada reiterated.

The officers closed by strongly urging the public to continue to come forward with anything that might be relevant to the case. Anyone with any information or dealings with Phallen in similar circumstances should contact the LPD at 716-754-8477 or the State Police at 716-434-5589 or online at www.facebook.com/nyspolice.