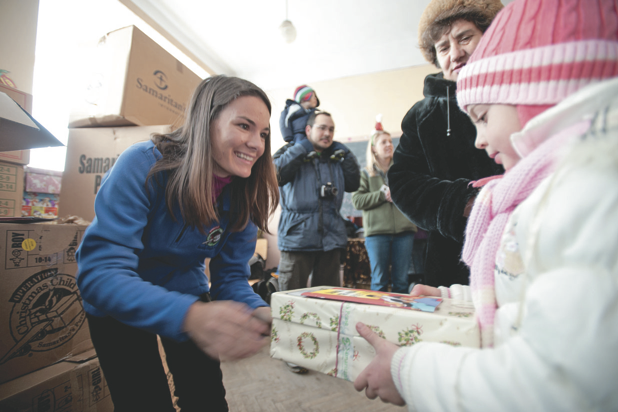 Livia Satterfield visits children at a Romanian orphanage as part of Operation Christmas Child. She will share her story Saturday and Sunday at local organizations.

For as hard as Western New Yorkers will fight to keep sunny skies and warm temperatures this fall, we all know what's right around the corner. Pretty soon, department stores and TV commercials will initiate a countdown clock reminding us the holiday season is near, and shopping opportunities abound.

It's Operation Christmas Child's hope we'll take a few minutes before the hustle and bustle begins to consider what's truly important. To that end, OCC is bringing a special speaker to Western New York this weekend to share her story of hope.

In 1999, Livia Satterfield, now 27 and living in Georgia, received a package from Operation Christmas Child. She was an orphan living in a world that was dark, dreary and lonely.

"I grew up in the country of Romania," she said. "At the age of 2, my biological mom placed me in an orphanage, because she could not afford to take care of me. I lived in the orphanage for 10 years. And for 10 years I lived with very low-hygiene items. I rarely brushed my teeth - or maybe once a week - and if I did, I had to share my toothbrush with all the other children in the orphanage.

"I also took baths after five or 10 children sharing the same bathtub water. It was really gross. To this day, I cannot take baths, because I feel like I washed myself in dirt over and over again.

"We also wore same the same pair of clothes for a week. Same underwear; same pairs of socks. Whatever we had stayed on us for a week."

"When holidays came around, we didn't really celebrate that much," she continued. "I remember celebrating Christmas, but it wasn't in the way that we celebrate it here. We would just have more food than usual. We would decorate the place, but, if we would get a gift, it would not be a gift that would be our own. It was always shared. I, personally, never had a gift that belonged just to me, or I could call it my own."

What Satterfield didn't know back then was Operation Christmas Child had targeted her orphanage.

OCC is a ministry of Samaritan's Purse - a nondenominational Evangelical Christian organization. It delivers hygiene and gift items to needy children around the world. Franklin Graham, son of world-renown evangelist Billy Graham, is the president and chairman of the board of Samaritan's Purse.

"Before Operation Christmas Child came, I want to say that my biggest dream in life was to always have my own set of hairclips," Satterfield said. "I don't know why. I just thought that was the coolest. But I felt like I could never get them, because I could never have a gift of my own."

She said that feeling resides daily in the hearts and minds of orphaned children.

When OCC arrived at Satterfield's orphanage, "It meant so much to me," she said.

In her wildest dreams, Satterfield could never have imagined what happened next.

"That same day when Operation Christmas Child came, at the same time a mission team from Newman, Georgia, they came, and they were able to help distribute the shoeboxes. And that day, I was able to connect with a lady named Connie."

"Her and I ... really bonded," Satterfield said. "In the orphanage, even though there was a lot of darkness, a lot of hate, a lot of jealousy, a lot of stealing, we all had one piece missing in our lives, and that was love. We had the absence of being loved. And we were desperate for attention - and desperate for someone to just talk to us, and hold our hand and pat our backs. And we just were really, really missing that in our lives.

"And so when I saw Connie, I (just wanted) her to be mine. I didn't want her to be shared with anybody else, because I was very desperate to accept love - to understand what it feels to be loved."

Connie shared the shoebox, and the Gospel, with Livia, who was 12.

"It really opened my eyes," she said. "In the orphanage, I used to kiss pictures of Jesus; I used to make crosses across our bodies and recite the Lord's Prayer, but there was no purpose behind it. And when they shared that Gospel with me, it meant a lot to me to know that I am loved - I'm loved by God."

Satterfield was anxious to look inside her shoebox.

"So, finally, Connie gave me the shoebox gift, and when I opened it, at the very top of the shoebox happened to be a big packet of hairclips," she said. "I could not believe my eyes. How could there be a packet of hairclips - something I've always wanted for so many years? And so, what I did, I tore through that box wanting to put all the hairclips in my hair. I did not want to leave a single one behind."

She received hygiene items, too.

"The one last item I received that I remember was a 'best friends' necklace," Satterfield said. "It was heart broken in half (in two connecting pieces), and it said 'I love you' on it.

"It was pretty hard adjusting to the culture, but the No. 1 thing I actually like about the south - which you will think is really funny - I like the country accent," Satterfield said.

"I used to think of America as being rich and having lots of candy and being friendly. And that is so true," she said. "Americans are rich. They do have lots of candy, and they do help each other out."

It wasn't long after she arrived in the U.S. that a local newspaper got wind of Satterfield's tale.

"Ever since, everybody wanted to hear my story," she said.

In 2004, she went to a conference at Berry College in Georgia. There, she shared her story and started volunteering for OCC.

Today, Satterfield travels the country showing OCC volunteers, church and youth groups and civic organizations, the influence a single, simple shoebox can have on a child's life.

"I wanted them to understand that these shoeboxes do go far away," she said. "We do get to hear the Gospel. We do get to be impacted for the rest of our lives. And we feel the love from the people, and from God, of course."

Satterfield will tour Western New York this weekend. One of her stops is to First Presbyterian Church of Lewiston, 505 Cayuga St. She will speak at 2 p.m. Sunday.

Eric Stellrecht, area coordinator for Operation Christmas Child in Erie and Niagara counties, said, "She's going to be stopping at a whole bunch of, not only churches, but also the University at Buffalo campus. She'll make a presentation that just kind of helps to illustrate what a shoebox can do in the life of a child by explaining her own story."

Satterfield will encourage others to give, and recruit new groups to participate in this year's OCC collection.

"We target situations where kids may be distressed in a particular way - whether it's a Third World situation, or an orphanage situation, or a war-torn nation situation," Stellrecht said. "Just to provide a child with a sense of joy. Communicating to them that someone far away loved them enough to donate that shoebox to them, and pack it for them specifically."

"At first, of course, it was difficult, because more memories were coming," she said. "I've learned over the years that I have been healed. There's nothing to hide. I feel great to share that God took me out of darkness and brought me to life.

"When I share, God reminds me every time of my past and how he saved me. He took me out of the past and wanted me to live a better life."

"I want to be the (example) for them," Satterfield said.

Those interested in listening to Livia can find her full schedule on the Niagara Frontier Publications website, www.wnypapers.com.

"What's required is an empty shoebox or an empty, plastic shoebox-size container," Stellrecht said. "The person packs that with hygiene items like toothbrush and toothpaste or a washcloth. Or clothing items like socks or gloves or sandals. Or toys. Or school supplies. Or things like chalk and crayons and colored pencils.

"And then those boxes are eventually dispersed over the entire world, in over 130 countries."

More than 9 million boxes were distributed in 2013.

"It impacts quite a few children throughout the world every year," Stellrecht said.

Stellrecht can be contacted via email at [email protected]. 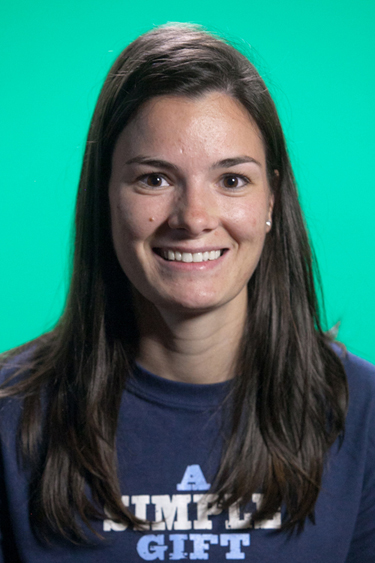