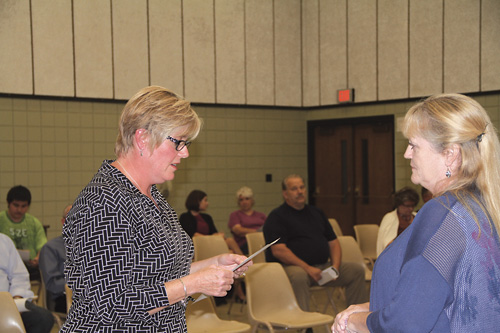 Article and photo by Janet Schultz

The Lewiston Porter Board of Education has appointed Cindy Duke to fill a vacancy on the board, left when longtime board member Keith Fox died in July.

Duke, a resident of Youngstown, and her husband Dan, have a son who graduated from Lew-Port in 2010 and a daughter who is currently a freshman in the high school.

Over the years, Duke has been very involved in all of the district's education centers - primary, intermediate, middle and high schools - serving in various volunteer roles and leadership building.

"I wanted to move to the next level and become part of the larger decision making of the district and be part of the search for the new superintendent," Duke said of her decision to apply for the position.

The board received two applications for the position, with Board President Jodee Riordan stating that it was a very difficult decision because both candidates were very qualified.

Duke will serve on the board until the May 2015 elections when district residents will elect a board member from duly petitioned candidates to fill the remainder of the term of the vacant seat.

•James Briggs, president of the Niagara-Orleans Central Labor Council, approached the board asking its participation in an alliance that would seek funding for three local school districts from the New York Power Authority.

Briggs reported the Power Authority has given millions of dollars to such projects as the Buffalo waterfront, but little to local agencies. His group feels that NYPA should support the education of area children and by working together they could obtain funds that could assist the three districts in the Power Authority's jurisdiction, including Niagara-Wheatfield, Niagara Falls and Lewiston-Porter.

The Lew-Port BOE will take this under consideration.

•The board also received two presentations on how Lew-Port will teach mathematics successfully to their student body.

The Sixth Grade Math Enrichment program and the Think Through Math program will provide a unique opportunity for children to use video at home to work on their math, increasing time in the classroom for more one-on-one learning and giving teachers a constant assessment of where each child is in their progression on learning math.

The Enrichment Program has been developed by Lew-Port mathematics teachers and includes online videos through YouTube that will initially teach the children. As students move up, it can be used for review. This program can also be viewed and used by parents to help them through the common core issues students may be having with mathematics.

The TTM program was developed by an outside company and Lew-Port is piloting it through January. At that time the district will make a decision on whether to purchase it or not. This program provides online, live teachers who can assist students with their homework. The students can talk to the teachers via chat and can choose whether the online teachers would chat or actually talk to them by use of earplugs.

The TTM program is geared for all grades, but is currently in place for the seventh and eighth grades, with the sixth grade being integrated shortly. It is used on campus only and students are currently being scheduled on a rotating basis for its use.

As the district utilizes these programs, parents will be brought in to have the programs explained and demonstrated.

Middle School Principal Dean L. Ramirez noticed a significant increase in the number of students and the time they are using the Lew-Port Sixth Grade Math Enrichment program since the beginning of school, just three weeks ago.

However, he made it public that after much consideration by the administration and board, the building of a new swimming pool in the high school will be put aside and the current one will be refurbished.

"Our capital project was over budget and the pool was a difficult thing to maintain. In order to do that we'd have to eliminate other projects that pertain to academia," Roser said.

"There are a lot of revisions to the plans now that the pool issue has been resolved. Our architects will have new plans to us by Nov. 1," he continued.

"We are disappointed about the pool, but there can now be discussion of what can be done in 12 years, when the liner in this pool will need to be redone," he concluded.

•The BOE will hold a special meeting/work session on Tuesday, Oct. 14, with the regular monthly meeting slated for 6:30 p.m. Tuesday, Oct. 21, in the Community Resource Center.