Carl Paladino was the keynote speaker Thursday at the Lew-Port Academy of International Business & Finance "Blender" inside the Niagara Falls Country Club.

The chairman of Ellicott Development Co. and former gubernatorial candidate drew a laugh when he told the crowd of about 125, "OK. I'm the guy. I'm that big mouth." He spoke of his time on the Buffalo School Board, offered tips on how New York's elected leaders could lower taxes by better utilizing New York Power Authority funds, and gave advice to students.

"One person can make a difference," Paladino said. He encouraged students to take charge of their future. "When we stand together, there's no stopping us."

"These children are our future," he added. "They're not going to tolerate what we have had to tolerate in their lives."

The Lew-Port Academy of International Business & Finance is self-described as an avenue to provide students with the knowledge and skills that will give them an advantage in their academic and professional careers. Students at the "Blender" networked with business and political leaders. Some inquired about internships or employment opportunities.

"I can tell all the young people at the academy here tonight have a wonderful, wonderful opportunity that many others don't have," Paladino said.

Lewiston-Porter High School Principal Paul Casseri said, "We're one of the newer academy programs in Western New York. ... (We were) looking for ways to really focus our energies on 21st century learning."

The program currently has more than 60 students.

One audience member asked Paladino to provide an update on his company's plans for property purchased at the corner of Center and North Eighth streets. In February, Paladino's son, William, CEO of Ellicott Development, presented the Village Board with a proposal to build a plaza with a chain restaurant and drug store. Trustees did not favor the plan and asked William to tweak it.

"It's my son's project," Paladino noted. "He said, 'Dad, you'll only mess it up if you try to talk about it!' Because I called him just before I came into the room. He said, 'You're going to mess it up; don't say anything!'

"I guess they're making a presentation this coming week, and I think we'll all know what we're doing. But we're very happy to be doing a project up here in Lewiston. We've been looking at it for a long, long time. And the city fathers have welcomed us with open arms. And we're looking forward to it.

"Hopefully we can bring something better for the community."

The Village of Lewiston is expecting William Paladino to present a revised proposal at the Planning Board meeting tentatively scheduled for Oct. 13.

In an email to the Sentinel Friday, William wrote, "We will (be) applying next week to the Planning Board for preliminary review in October. We have no comment until that meeting." 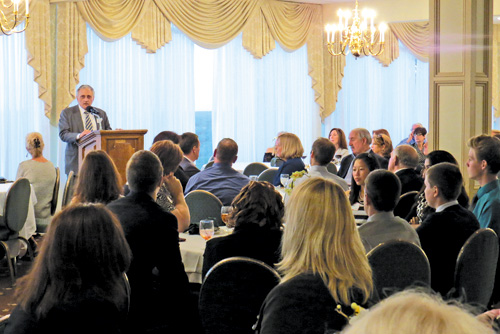