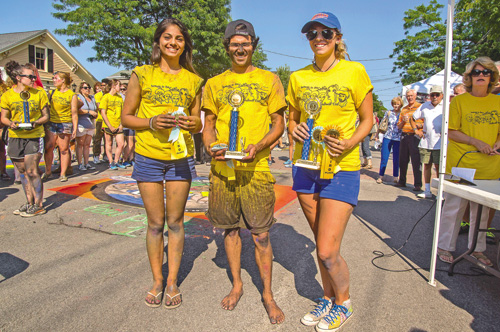 •Taken from the Aug. 15 Island Dispatch

The 8-foot by 10-foot chalk mural entry of Lovepreet Kaur, Abhiraj Grewal and Ali Price (pictured at right, from left) was chosen by the public from among the 18 high school teams that entered the contest, held annually at the festival.

Price said she was happy the team took home the People's Choice, after spectators voted Chicago-style to cast unlimited monetary votes for their favorite mural.

"That says a lot that the people chose us," she said.

Below, the team is pictured with their finished mural. The theme of the Chalk Walk competition was "Selfie," the popular modern self-portrait commonly taken with cameras phones. The GIHS mural depicted the three students both in a camera and also in the style of Picasso (Kaur), Van Gogh (Price) and Modigliani (Grewal).