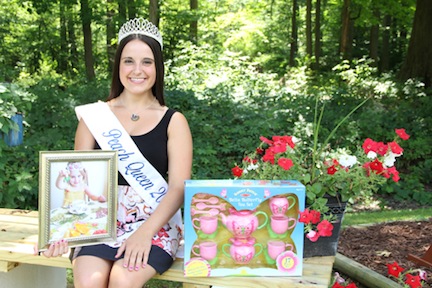 Peach Queen Ali Casale holds a picture of Isabella as she sits next to a tea party set. (photo by Vicki Devantier)

Working with children is a big part of Ali Casale's life. And because her brother spent part of his childhood in the Ronald McDonald House, she knows the value of bringing a smile to a sick child.

That was the motivation behind the Lewiston Kiwanis Peach Queen's decision to hold a fundraiser to benefit Bella's Tea Party, a charity organization that donates toys to sick children to honor the memory of Isabella Tennant, a Niagara Falls girl who was killed in 2012.

"I think that it's a great organization," Casale said. "(This is) a beautiful way to spend three hours out of your day to fundraise not only for Isabella Tennant, but for a lot of sick children. ... I think it will bring a lot of joy to their lives."

Organizing the fundraiser has been a new experience for Casale, whose only prior experience with fundraising came from an event she once organized with friends. She said she began planning last month, and started looking for support from businesses a few weeks ago.

Also involved in the fundraiser is Jennifer Pauly, president of the Niagara River Region Chamber of Commerce, who serves as Casale's mentor, and program coordinator for the Peach Queen program.

Pauly said that, since 2008, when Kiwanis first began requiring the Peach Queen to organize a fundraiser during the year she was chosen, it's grown every year.

This year is the sixth since the program change was implemented.

"Every year, the Peach Queen has taken the initiative and run with it," Pauly said. She noted the Peach Queens handle most of the work in organizing the fundraisers. "I'm really proud of them."

Both Casale and Pauly are happy with the public response so far. Casale said she created a Facebook page for the event and it was shared 40 times in just three or four days. Pauly said they were getting calls from people they didn't even know who were interested in buying tickets or making donations.

"It's definitely going to be a great day!" Pauly said.

Live entertainment during the fundraiser will be provided by Adell's School of Dance, where Casale works as an instructor. The dancers volunteered to perform at the event.

"She's such a great teacher, and a lot of her students really love working with her," Pauly said.

During the fundraiser, there also will be a 50/50 raffle and basket auction.

The fundraiser will be held from 1 to 4 p.m. Sunday, July 27, at Antonio's Restaurant, Banquet and Conference Center, located at 7708 Niagara Falls Blvd. Tickets are $15 per person presale and $20 at the door. Lunch is included. Tickets for the basket auction and 50/50 raffle will be sold separately.

A formal presentation of the funds raised will be held during the Peach Festival on Sept. 7.