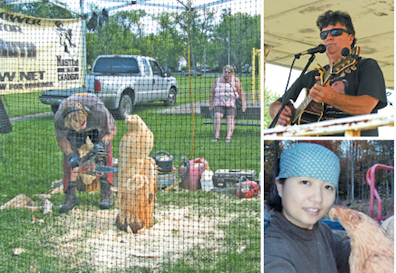 As we begin the month of July and with summer now in full swing, the Rotary Club of Niagara County-Central is busy preparing for its 24th annual Olde Sanborn Days festival, featuring live entertainment, arts and crafts and food vendors.

"When they stopped, there was a hole in the community," Sullivan said. He explained the Rotary Club stepped in to fill that hole by creating a family event with plenty of community involvement. They called it Olde Sanborn Days.

"I think it's great," said Tom Grimm, another Rotary Club member. "We have a lot of fun doing it."

One of the main attractions at the festival is the live chainsaw artist performance, an event co-sponsored by the Lewiston Council on the Arts. LCA Executive Director Irene Rykaszewski said her organization has a long history of presenting chainsaw artists for the festival.

This year's artist is Japanese-born Aya Blaine, a member of the Chainsaw Chix, an international, all-female group of chainsaw carvers.

Rykaszewski said organizers usually leave it to the artist to decide on what to create, and that depends on the wood blocks provided.

"You know what they say," Rykaszewski said. "The sculpture is in the wood; they just have to peel away the excess!"

Sullivan said the chainsaw artists at the festival usually make two or three pieces a day, and often put those pieces up for sale afterward. One of the pieces will be donated to a building in the community after the festival.

More artists will showcase their work during the arts and crafts fair that will also take place during the festival. Sullivan said that most of the artists are local or from the Western New York area.

Other events on Saturday include a blood drive by Unyts, a flag retirement ceremony, and live entertainment by the Reimai Tenkui Daiko Japanese Drum Group. On Sunday, there will be a basket auction at 3 p.m. and a car show all day.

Sullivan said there will also be plenty of entertainment for kids, including a petting zoo and pony rides. Also on site will be an appearance by the Niagara County Sheriff's Office K-9 Division and a presentation on wildlife rehabilitation.

Sullivan said that the festival has been a good place for the community to gather, and with so many events, there would be something for guests of all ages.

"You might call it a destination for the weekend," Sullivan said.

All funds raised from the festival go toward the Rotary Club's community projects, including scholarships for local high school students and support for victims of domestic violence.