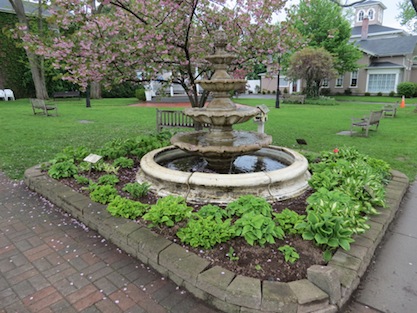 The Village of Lewiston has started efforts to spruce up Center Street.

At Monday's Village Board meeting, Marianne Gittermann, chairwoman of the Lewiston Beautification Committee, read a laundry list of chores her group has begun, in cooperation with the village's Department of Public Works.

"I just want to bring everybody up to date, because there are some things happening in the village, and I think they're good things," she said. "The lampposts are presently being repainted with the DPW; the cedar antique benches, flower boxes and trash receptacles made out of wood are being considered by the Boy Scouts as part of an Eagle project. ... The black metal trashcans are being repainted by beautification volunteers."

Also, Gittermann said a portion of the greenery between Subway and the Lewiston Village Pub is being redesigned; the Historical Association of Lewiston is paying to have the Tuscarora Heroes Monument landscaped and weeded; and the Lewiston Garden Club is financing and overseeing the installation of new bushes between Fourth and Fifth streets.

In the past month, the business community has repeatedly sought input from trustees and Mayor Terry Collesano on how to repair the village's main road.

"At our last meeting, there were some business owners there that expressed concern about the appearance of Center Street - the aesthetics of it - the fact that the streetscape was done 15 years ago ... and over time things have deteriorated," said Rick Haight, chairman of the Niagara River Region Chamber of Commerce Lewiston Advisory Committee. "I know funding - budgetary numbers - may not be there for a total repair.

"There were concerns about the benches, that they're starting to deteriorate; the type of bench that was installed in the streetscape may not have a long lifespan. Maybe they should've been something else? (They're) concerned about the lampposts - not only the bases that are deteriorating because of the dogs, but the shades on the lamps, as well. ... There's concern about some of the pavers in the sidewalk - just the long-term maintenance.

"Over time, things deteriorate, and they need maintenance."

"I think everybody's on the same page that (DPW Superintendent) Bryan (Meigs) does not have the budget to do what needs to be done," said Emery Simon, owner of the Stone House and Lewiston Event Center. "I've talked to a few of the business owners and some concerned people, and I think that there is a possibility here for the village and the local businesses to work hand-in-hand and see if we can do some things so the village doesn't carry the burden for it."

He offered to pay for new lenses in the street lamps in front of his businesses.

"I think that, if we work together, we can come up with some ideas that clean the village up - clean these things up, and maybe, for the future, make them (require) less maintenance," Simon said.

He asked the village to arrange a work session to hash out a partnership and a schedule of cleanup attack.

Collesano, who owns and operates the Olde Time Barbershop on Center Street, said, "I, for one, three years ago, I put a $2,000 investment to the village property in front of my establishment, and it costs me anywhere from $150 to $260 every year to keep that up."

"I don't expect the other business people to do that, but just to put up a few flowers and keep it clean in front of their establishment would be a great, great beginning for us in the village," he said.

Collesano said the DPW was "tied up all winter" with snow removal and tending to water breaks, and couldn't find time to clean up the benches and the trash bins.

"We realize that there is a problem and we want to start attacking it (this spring)," he said.

Trustees and Chamber of Commerce leaders plan to meet in the coming weeks to discuss cleanup ideas.