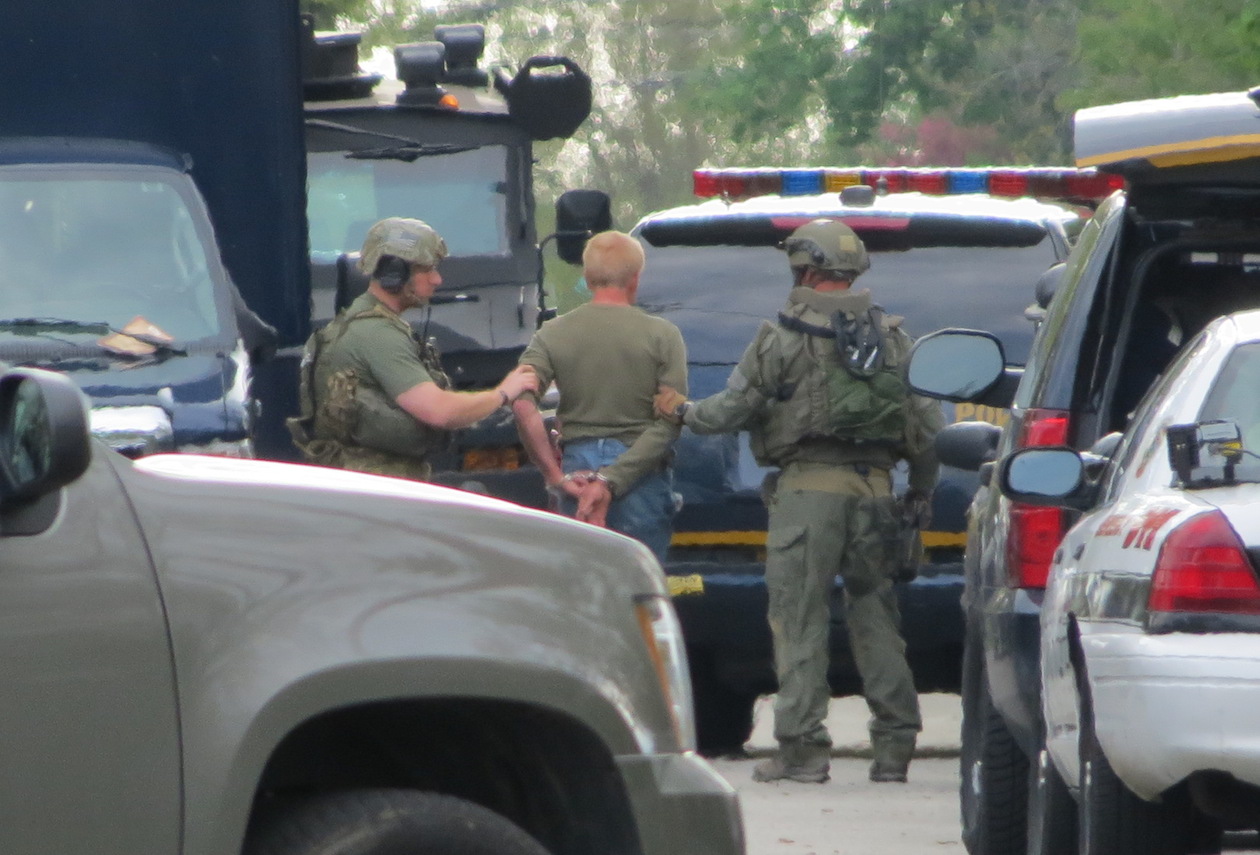 Leonard A. Zientara is shown in handcuffs.

A 12-hour standoff Sunday ended with a Village of Lewiston resident taken into custody. Leonard A. Zientara, 51, of 430 West Lane, surrendered himself to New York State Police after allegedly setting his house on fire.

Zientara first called police around 2:30 a.m. Officers arrived to Zientara's home before 6 a.m. to ascertain his intentions. They did not know if he planned to harm himself or others, nor did they know if he had any weapons on site. About 10 a.m., neighbors were alerted via reverse 911 calls to either stay in their homes or stay clear of the area, depending on their proximity to West Lane.

Police officers communicated with Zientara by phone throughout the day. State Police Special Operations Response Team members were seen moving back and forth on West Lane. Fire and medical personnel were on hand should their services be required.

After 5 p.m., smoke could be seen above West Lane. Zientara turned himself in about 5:30 p.m.

"New York State Police received a dispatch from the Niagara County Sheriff's Office dispatch regarding a possible assault. SP Niagara Troopers responded to West Lane in the Village of Lewiston. Contact was made with the resident Leonard A. Zientara, age 51, however, he refused to answer the door or exit the residence to speak with the troopers. Telephonic communication was made in an attempt to speak with Zientara, who continued to refuse to exit the residence.

"State Police Bureau of Criminal Investigation negotiators responded to the scene and established an open line of communication, which continued for several hours. As a safety precaution, a reverse 911 call was made to the Village of Lewiston residents informing them of the situation and allowed residents access to leave the area. State Police Special Operations Response Team members also responded to the scene and established a perimeter around the residence.

"Zientara eventually exited a second story window onto his roof. Communications continued with negotiators and SORT members. At approximately 5:15 p.m., he started the residence on fire through a hole he created in the roof. As the flames, increased Zientara re-entered the residence and surrendered himself, without incident, to SORT members who had gained entry into the residence.

"Zientara has been charged with arson (second-degree), a class B felony, (and was) arraigned in the Town of Lewiston Court and remanded to the Niagara County Jail without bail.

"Assisting at the scene were the Village of Lewiston police and fire departments."