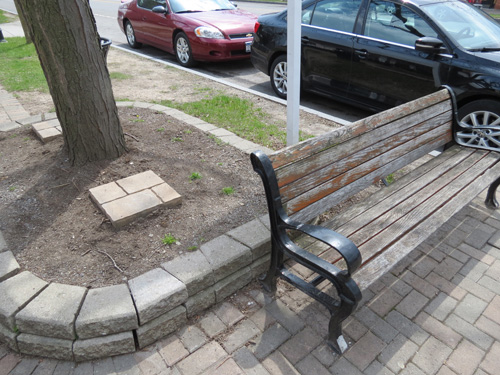 Balding grass, cracked benches (above) and worn-away paint on light poles (bottom of next page) are in need of attention in the Village of Lewiston. (photos by Joshua Maloni)

Is Lewiston at risk?

This summer, thruway construction will hinder tourists as they enter the village; once they're here, business owners aren't sure they'll like what they see

Lewiston business owners fear their prime season could be in jeopardy this year.

As spring turns to summer and warm weather takes hold, Lewiston turns on its tourist magnet, with weekly concerts, monthly festivals and outdoor events. This year, however, the thruway to and from the village is under construction, which will delay visitors from coming and going - and could persuade them not to make a trip in the first place.

For those who do come to Lewiston, business owners don't want first impressions to be of rusted light poles, cracked streets and patchy grass.

Construction recently began on a portion of I-190 in front of the New York Power Authority - a thruway section right before the entrance to and exit from Lewiston. The $41 million project is expected to end late next year, which means two summer seasons will be affected.

"If this summer doesn't beat us, the reputation of it is going to follow us next summer."

"We're all concerned about that," Mayor Terry Collesano said.

He contacted Assemblyman John Ceretto in search of answers. Ceretto called a meeting Thursday, which was attended by Collesano, former Mayor Richard Soluri, State Sen. George Maziarz, local business leaders and John S. Cogswell, P.E., who is the engineer in charge of Region 5 construction for the state Department of Transportation.

"The reason we called this meeting is there has been some concern from restaurant owners, as well as Artpark is concerned, there's construction going on at the I-190 in front of the pumping station - the power plant," Collesano said. "The concern is the traffic; how is it going to be handled this summer - especially when there was 10,000-plus people coming in probably at one time, when most people come into concerts Tuesday nights, Wednesday nights, as well as the festivals, which draw a considerable amount of people into our area."

Cogswell is quarterbacking the construction. He explained what's taking place.

"We're replacing the three bridges over the 190 north, the 190 south, and the 265 bridge over the power reservoir - at the pumping station," he said. "This contract is tentatively scheduled; all three bridges should be completed according to the contractor's schedule by December 2015.

"This year's going to see the replacement of the I-190 southbound bridge, which is, right now ... we have one more bay to (demolish), then we've got to rebuild it. The end of the season's going to see I-190 northbound be (demolished), which we're tentatively scheduled to set steel on that and then actually pour the deck and do other things next spring. And then complete the job by December of 2015, in which case all three bridges will be replaced. We'll have some incidental work, but the traffic impact will be over at that point."

The construction has rerouted traffic.

"One of the contract requirements of this job was that we always contain two lanes northbound and one lane southbound," Cogswell said. "So that is in place right now."

"The I-190 southbound bridge right now is removed. The one lane of traffic's on the east side of I-190 northbound, and we're using the west side of that bridge to do our work," he added.

The alternate route at Route 31 (Witmer Road) - where motorists would exit when the thruway was backed up - is still viable, but travelers will have to make an adjustment. Prior to construction, they could turn right at the stoplight and then left on Military Road to continue on to Lewiston. Now, they'll have to turn left at the light and continue to Hyde Park Boulevard. From there, they can turn right and take Lewiston Road (104), passing Niagara University, and head down to the village.

Business owners expressed concern Artpark patrons will have trouble getting in and out of Lewiston on "Tuesday in the Park" and "Coors Light Wednesdays" concert nights.

In recent years, Artpark & Company arranged to have some guests exit Lewiston via a Seneca Street entrance to the Robert Moses Parkway (heading to Niagara Falls). That alleviated some of the congestion in the village.

Now, the concern is the thruway.

Artpark & Company President George Osborne asked Cogswell if the DOT could create a temporary Robert Moses Parkway exit at Hyde Park Boulevard, so that motorists could take advantage of a shorter route back to Route 31 and the thruway. Cogswell said he would check with his superiors.

"George, you're going to lose a ton of business. A ton of business," DiBernardo said. "The reputation about Artpark is starting to be that it ain't worth the traffic."

DiBernardo added, "I believe we have a 50 percent reduction in traffic right now with the new construction." Coupled with the loss of one thruway lane going out of Lewiston, "This is a colossal disaster waiting to happen."

"I think we have to do whatever we can do," he said. "On Tuesday nights, it has to be all hands on deck. I think Tuesday mornings, the Power Authority, the village and the DOT should be looking at the weather patterns, the ticket sales, and saying, 'What can we do to be creative?' And if that means we need additional police flagging it down, we've got to do what we have to do here."

Ceretto and Cogswell agreed to host a second meeting following the first "TIP" concert to re-evaluate the situation.

Traffic notwithstanding, many Lewiston business owners are concerned tourists will get the wrong first impression of the historic village when they do arrive.

On Monday, Lewiston Event Center and The Stone House owner Emery Simon questioned the Village Board about "streetscape," the sweeping Center Street reconstruction project that took place in 1999.

"Center Street is starting to diminish in its shine," he said. "We need to think of different ways that we can come up with to make it look better."

Simon said streetscape is starting to show cracks. He pointed to dirty trees, foggy lights and rusted light poles and said Center Street is "decaying because of the way it was built. It's a product of its construction.

"If you build something to maintain it - if you build a cedar house - you better be ready to stain it every other year. We kind of built a cedar house, and now we're kind of married to it. So how can we make it better?"

Simon was quick to say the Department of Public Works and Superintendent Brian Meigs are not at fault.

"I see a lot of what Brian does being in construction," Simon said. "Brian and his crew, they're doing a tremendous amount of work with a limited amount of money."

Members of the Niagara River Region Chamber of Commerce said the DPW is undermanned.

About a dozen business owners met with the chamber's Lewiston Advisory Committee Wednesday, seeking a way to re-beautify the village, with or without the DPW.

"I think we're all here to see what we can do to help improve the appearance of things in the area," said Gretchen Broderick of The Country Doctor.

She presented pictures to the group and said, "The trash cans are awful. They're all in need of painting and staining and replacing. The benches are sad and deplorable looking. There are tripping hazards all over. ... The roots are just popping out of the grounds."

"The light poles where the dogs have urinated on them, every single one of them, the paint is off the bottom of them. Every single one up and down the street."

"I don't know what they can do about planting grass, but the grass between the street and the sidewalk is just gone. Everywhere," Broderick said. "It's so worn down; it just looks awful."

She, too, said the blame doesn't lie solely with the DPW.

"This isn't meant to point a finger at anyone," she said.

"It's something that I think everybody at the table wants to see done better," said Ken Bryan, owner of The Brickyard B.B.Q. and Pub, Brio and Tin Pan Alley. "Whether people that own property on Center Street need to go out and do a little more of their own. Maybe we need to address all the property owners on Center Street, also. ... Maybe we need to do a little bit more. We try, but I think some of us depend on the village."

Pam Hauth, village historian and co-chairwoman of the village's beautification commission, said her committee is short-staffed and underfunded.

Business owners suggested adopting a portion of the street, in an "adopt-a-highway"-type initiative. They wondered if benches could be purchased and renovated by private individuals as a means to memorialize a loved one.

"To me, it's about staying on top of things; making sure things get done," Angel to Apple's Jamie Symmonds said.

Ron Craft of Lewiston Antiques said, "I'm tired of it. I want to make a living here. And I see the street going down, and businesses are not going to be coming here when they see how hard it is to do business."

"The whole situation is, when they did the streetscape, I asked the question how are we going to maintain this. I was told it wouldn't be a problem," said Lewiston Tops proprietor Anthony DiMino.

"All those benches and all those things ... it should be budgeted every year," he said.

But he also told the group, "It's all part of doing business. If you want your business to look nice, it's up to you to maintain it."

DiMino said larger projects such as street repair and tree maintenance are up to the village board.

"It's all part of the streetscape - that they promised when they built it - that they were going to maintain it," he said. "The problem is, you ask them why they haven't maintained it, (and) they'll say they have no money."

Collesano said the Village Board is aware of the aesthetic issues. He said Meigs intended to allocate time to make repairs over the winter, but, "It was such a harsh winter, they didn't have time. They're out plowing snow all the time. They didn't have a chance to do it."

Now that the snow has ceased, "We're waiting for Brian to come in with his plan of attack for the benches - all the various things that need to be done on Center Street," Collesano said. "And he should have that ready for us, for the board, on our (May) 19th meeting.

"It's nothing that we're not aware of."

Two potential fixes will be discussed in coming weeks. One involves utilizing Scouts to volunteer and help spruce up Center Street. The other would require the Village Board to create a maintenance fee for festival vendors. Event organizers would be taxed, so to speak, and that money would go into a restricted fund dedicated to maintaining the village's main road.

Additionally, Collesano said the DPW is working on potholes, while village engineers are working with the DOT to come up with a plan to fix Center Street (the road itself) and flatten out its crosswalks.