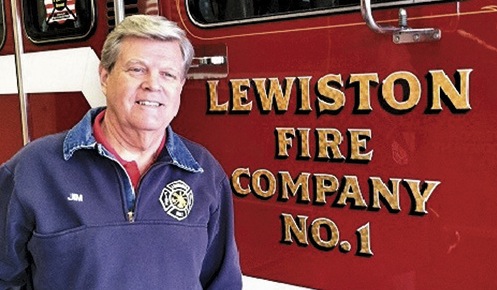 Village of Lewiston Citizen of the Year

James (Jim) R. Franey was chosen by Village of Lewiston Mayor Terry Collesano as the 2014 Village of Lewiston Citizen of the Year. Franey's service and commitment to the community has been part of his life for more than half a century, as he worked to protect the businesses and residents of Lewiston and educate the public about fire safety and prevention.

Franey has been a volunteer with Lewiston Fire Co. No. 1 for the past 52 years, with many more to come. When he moved into Lewiston with his wife, Donna, in 1960, Jim had friends who were involved in the fire company. They encouraged him to become a member. At that time, Donna joined as part of the Ladies Auxiliary. He soon learned being a part of Lewiston No. 1 is a great way to become immediately involved in the community and an even better way to make volunteering and service something the entire family can be involved in.

His service there as a firefighter, EMT and member has included leadership positions as past chief and president as well as past president of the Exempt Firemen's Association and many others in between. He was the first fire inspector for the Village of Lewiston, appointed by Mayor Ed Shuster, and created the program for the village. Franey was a charter member of the Town of Lewiston Fire Prevention Bureau, and the village adopted the New York State Fire Prevention Code on his recommendation.

He is also involved in the scholarship program the company gives to a high school senior. Lewiston No. 1 has given $1,000 a year in scholarships since 1975.

As Lewiston Fire Co. No. 1 celebrates its 100-year anniversary, Franey has been a part of more than 50 years of positive changes occurring there. There have been many building expansions over the 50-plus years he has been there, with the most recent renovations finished just in time for the anniversary. The expansion has created room for all of the trucks; storage space; offices for administrative and line officers; a new banquet area to bring in revenue for the company, and much more. Some of the 100-year anniversary celebrations and fundraisers include a gala for the members, an open house for the community in July and, of course, the summer boot drives that happen along Center Street.

Lewiston has been home to the Franeys for the past 54 years. They raised their three children (Colleen, DeSales and Matthew) in this community and have loved having a place that is family-centered and offers opportunities for service.

Franey retired as a safety engineer from ElKem Metals Co. In his spare time, you can find him still volunteering at the firehall in a few roles, as it is a major part of his life.