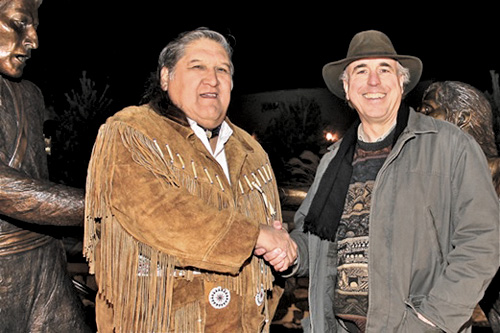 Lee Simonson (right) stands with Tuscarora Council member Neil Patterson Sr. at the unveiling of the Tuscarora Heroes Monument on Dec. 19. Simonson was the volunteer director of the project and worked closely with the Tuscaroras in creating Lewiston's newest iconic landmark, located at Portage Road and Center Street. The monument stands as a testament of appreciation and gratitude to the Tuscarora Nation, which saved dozens of Lewiston lives during the War of 1812 British attack. (photo by Bill Carpenter)

In today's Sentinel, we open with profiles of the 2014 honorees - leading off with Lee Simonson, the Town of Lewiston Citizen of the Year.

Town of Lewiston Citizen of the Year

"History is Lewiston's future for Town Citizen of the Year"

Lee Simonson has been chosen by Town of Lewiston Supervisor Dennis Brochey as the 2014 Town of Lewiston Citizen of the Year. His dedication to history and commitment to the community has helped bring a new light to Lewiston.

A world of opportunity opened up for Lee Simonson when the 26th Amendment to the U.S. Constitution was adopted in July 1971. It gave 18-20-year-olds the right to vote and run for public office.

A year and a half later, at age 19, with no money, experience, or political backing, Simonson decided to throw his hat in the ring. Not for the school board, or village or town office, but for a seat on the Niagara County Legislature. Lewiston voters embraced his enthusiasm as he went door-to-door, and Simonson won a close primary election against the entrenched incumbent. He went on to defeat his general election opponent several months later at age 20, becoming the youngest legislator elected in the state at that time, and the youngest ever elected in Niagara County, a record that still stands today.

Simonson was elected for 16 consecutive terms and served the county for 32 years in a number of capacities, including several terms as chairman of the Legislature. He led the charge on environmental issues and became one of the state's experts on mandate reform, particularly soaring Medicaid costs. He never aspired to higher office though he was asked many times. "I have never been the kind of person who can live out of a suitcase," he said.

After driving back and forth to the county seat in Lockport 5,000 times, Simonson decided to retire from the Legislature to lighten his schedule to concentrate more on his businesses. He has been self-employed for nearly 40 years, and today he is the owner of 24Conference.com, serving hundreds of businesses and nonprofits across the U.S. and Canada with phone conferencing services.

"Having the independence of operating a small business reflects the ideals that my parents inspired. They operated their own photographic studio for 57 years and loved what they did. It's the American dream," Simonson said.

But before Simonson retired from the Legislature, something happened. The Historical Association of Lewiston was undergoing a major reorganization. The new president, Diane Finkbeiner, called Simonson to encourage him to fill a vacant board seat. Even though he said, "I'm done going to meetings," Finkbeiner was able to persuade him to take a seat "just for a year," and then he could quietly retreat to his private life.

The rest, as they say, is history. After his year's stint, Simonson hadn't even hit his stride. He discovered a new sense of purpose at the Historical Association and became enthralled with his volunteer activities, later becoming president of the organization.

He designed both the interior of the renovated Lewiston Museum and the association's website. Simonson began to raise funds to publish Lewiston's historical place mats, which he writes. More than 1 million place mats have been distributed at Apple Granny and Villa Coffee Shop in the past eight years, giving locals and visitors alike a unique and interesting look at Lewiston's rich heritage. He also writes the monthly Historic Lewiston email newsletter, which now has more than 7,500 subscribers.

But those efforts paled in comparison to his big ideas. In 2006, Simonson conceived the largest project ever undertaken in the association's history -- the bronze Freedom Crossing Monument on Lewiston's riverfront, commemorating our role in the historic Underground Railroad movement of the 1840s and '50s. He volunteered to write the grants and organized the entire process.

After the Freedom Crossing monument was dedicated in 2009, he became the volunteer author of the Tuscarora Heroes book (now in its sixth edition) and conceived, planned and began raising funds for the construction of the Tuscarora Heroes Monument, which became the largest War of 1812 Bicentennial monument project in the U.S. The project ushered in a new era of communication and cooperation with our neighbors, the Tuscarora Nation, and the monument now stands at Portage Road and Center Street as Lewiston's newest landmark. For his volunteer efforts, Simonson was chosen this year's national winner of the Spirit of 1812 award by the U.S. Daughters of 1812. All told, Simonson has raised more than $750,000 for the Historical Association.

"Lewiston is the volunteer capital of Western New York. If volunteers are focused, have fun, and feel like they are making a positive difference, there is nothing they can't do to improve Lewiston's quality of life," Simonson said.

In the summer of 2012, Simonson also led a group of volunteer citizens in a nationwide competition sponsored by USA Today and Rand McNally. The efforts resulted in Lewiston being featured on the Travel Channel and being named "one of the top 10 small towns in America." Lewiston also came in first place in online voting in the "Best for Food" category.

"Whatever recognition I receive has to be shared with the hundreds of volunteers who have given their time and talents to Lewiston's causes. They deserve the thanks and appreciation for making Lewiston one of the most desirable locations in the nation," Simonson said. "We're successful because we have supportive local governments, enthusiastic volunteers and engaged businesses. That's a winning combination that puts Lewiston in a very enviable position."

The Niagara River Region Chamber of Commerce and the Town of Lewiston are proud to honor Simonson as the citizen of the year.

The annual awards gala includes an evening of live music, silent auction and hors d'oeuvres, followed by a sit-down dinner and awards program. Tickets, priced at $95 per person, are available through the chamber office (895 Center St., Lewiston).

The Chamber Awards Gala is open to the public. Tickets and sponsorship opportunities are available through the chamber office by calling 716-754-9500. For more information, visit www.NiagaraRiverRegion.com.

Find more information and weekly profiles on this website.