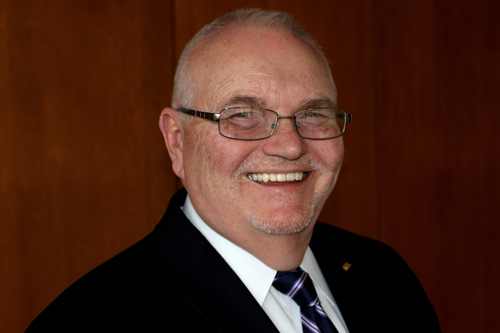 State Board of Regents candidate Polka has main focus on students

On Thursday, Feb. 13, Niagara Falls High School will host a rescheduling of an education summit to discuss the impact of the Common Core Standards on New York state schools. One of the summit's key speakers will be Dr. Walter Polka, a Niagara University professor and former superintendent of the Lewiston-Porter Central School District.

Polka is no stranger to the field of education. Having received his undergraduate degree from the State University of New York at Buffalo in 1968, he went on to earn his doctorate in curriculum planning in 1977. In his 36-year career in education, Polka has served various New York state communities as a teacher, administrator, curriculum coordinator, assistant superintendent of curriculum, and superintendent of schools. He is now a fully tenured professor in the Professional Programs Department of the College of Education at Niagara University and serves as coordinator of the Niagara University Ph.D. Program in Leadership and Policy. Polka is currently dissertation chair to nine Ph.D. candidates who are preparing their dissertations at NU.

Having established an impressive career in education, Polka is now vying for a seat with the New York State Board of Regents. On Jan. 28, the Partnership for Smarter Schools Executive Committee endorsed his candidacy. Speaking on this honor and of his future aspirations, Polka said he wishes to "give back to the system that has served so many, including me. I truly take to heart that Board of Regents proclamation that is embossed on the official State University of New York seals of my diplomas: 'Let Each Become All He is Capable of Being.' "

Polka points to his lifelong residency in New York state, having graduated from La Salle High School where he served as master of ceremonies for his 50th class reunion in September 2013. In May 2013, Polka was recipient of the Graduate School of Education 2013 Distinguished Alumni Award by the State University at Buffalo. He said he believes his extensive professional background and educational experiences in the state give him a "distinctive perspective about the historical policies and procedures associated with educational policy."

If elected to the Board of Regents, Polka promises to review the Common Core Standards, the current Annual Professional Performance Review, and evaluate the manner in which student data is collected, used and shared.

Commenting on how he feels his seat on the Board of Regents would make a positive impact on education in the state, Polka envisions, "Cooperative analyses of potential outcomes, well-designed, concrete examples based on pilot studies of major program revisions along with maintaining the mindset that is predicated on a continuous process for change."

He said he feels the reform agenda in New York was promulgated too rapidly by individuals who may not have thought out the consequences.

Polka said Common Core testing was pulled together too quickly and generically created. He states that Albany often creates plans without fully thinking them through and as a result, the state's students and families have been left confused and frustrated. He uses the analogy of building an airplane while flying and suggests that we would be better served, taking a step back and re-evaluating the process.

Polka refers to other states that have backed off from the Common Core and those that are reducing the number of standardized tests. He believes it is time to New York state to do the same.

Polka does not argue with regard to the efficacy of standards, as properly constructed standards give us an accurate view of where our students lie on a national and international scale. When responsibly constructed and appropriately administered, standards can give educators great insight when gauging student progress. Polka's concerns lie more in the "standardization" of the standards. He cautions that when we develop a set of tests void of local input, we risk great complications, anxiety and confusion. If these tests are created without the involvement of local bodies, the questions developed on the tests may make complete sense to students in one area of the state while in another, may leave children scrambling for understanding.

Polka wholeheartedly believes in the full partnership of parents and students in the reform process as opposed to relying solely on proposed changes from external forces. He stresses the need for an inclusive approach to creating standardized tests to ensure efficacy and fairness. Polka emphasizes the need for long range, strategic planning and urges those involved to truly consider not only what is being measured on these tests, but whether or not we are measuring too much.

Polka is a known critic of the Race To The Test movement that has overwhelmed New York state public schools as a result of the New York State Education Department's and State Legislature's decision to accept the federal government's Race to the Top grant program. He feels this has brought on too much federal control in an area that has been traditionally controlled by the state. He further voices his concern not only for the lack of feedback to parents with regard to their children's test scores, but that the tests are primarily summative in nature, not formative.

Polka notes some have compared this to going straight for an autopsy before the initial doctor's appointment - it just doesn't make a lot of sense and brings on unnecessary frustration to the teachers, parents and most of all, the students.

Teacher evaluations are another hot topic these days, and Polka intends to address this if elected to the Board of Regents. He believes there is a need for multiple measures when evaluating a teacher's performance and not just the evaluation of the "blue ribbon" lesson plans in which the teacher and principal have met ahead of time and have scheduled the date and time that the evaluation will take place.

Although he agrees this is perhaps not the best tool for teacher evaluation, he contends that it will reveal "some" evidence of teacher effectiveness. Polka would like to see these scheduled evaluations coupled with drop-ins and "five minute walk-bys," believing that a well-educated and prepared supervisor can tell a lot by walking by and sticking his or her head in the classroom.

Whether discussing his Board of Regents candidacy, the Common Core Standards or his 36-year commitment to the field of education, Polka's main focus is on the children. Time and again, he stresses the importance of strengthening the child's interpersonal and intrapersonal skills. He speaks of the "whole child" and stresses that it is high time we return the joy back to teaching and learning, and that we foster American creativity so that our children learn once again to express their ideas, views and talents and not get pigeon-holed by faulty standardized testing. Pointing to Dr. Seuss' (et al.) "Hooray for Diffendoofer Day!" Polka wishes to explore a better avenue to measure our children's creativity and honor their individuality.