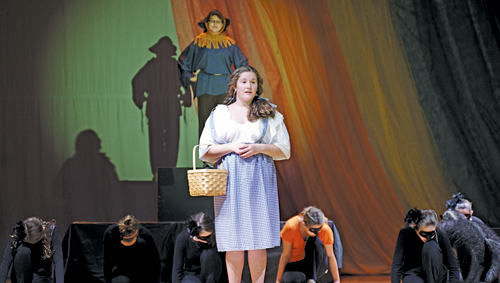 Katie Riederer is Dorothy and Abigail Fay is the scarecrow in the Connor Middle School production of "The Wizard of Oz." (photo by Larry Austin)

Taken from the Oct. 11 Dispatch

Connor Middle School students have known all summer that they would stage "The Wizard of Oz" for their autumn musical this year.

They finally get their chance when the curtain rises on the classic show Oct. 17 at the Grand Island High School auditorium. The show continues Oct. 18 and 19. All shows are set for 7 p.m.

Director Sarah Russo said the students were excited to hear the news they would be taking the yellow brick road to Oz this year, and it's made for some intense rehearsals in the short time period the high school auditorium is available.

"Our leads have been fantastic" since the third day of school, learning a big show, long script, in a short amount of time, Russo said.

"We told them last spring that we were going to be doing 'Wizard of Oz,' so a lot of the kids could do some character study if they wanted over the summer," Russo said. "And then it's been just an absolute whirlwind to put a show together in just about four weeks of rehearsal."

"They've been wonderful, but it's been a whirlwind," Russo said. "Or a tornado."

Russo and co-director Andrew Boron said the school is excited to put on a show beloved for generations.

"Obviously, it's a classic movie musical turned into a stage musical, and it only recently became available for young performers," Boron said. "So we're going to be one of the first schools to put it on in this area."

Abigail Fay, an eighth-grader who plays the Scarecrow looking for a brain, said the show will appeal to all ages, not just the pre-school members of the audience or to her classmates.

"The Wizard of Oz is really an all-age-friendly play. Everyone can come and enjoy something out of it because a lot of the jokes are towards adults," she said. The youth performer adaptation retains most of the elements that make the movie so popular.

"So I think that it's something that the whole family can enjoy," Fay said.

Boron said the VCMS production is aimed at no specific target audience.

"When I was 7 years old, I loved this show. My grandmother who is 70, she loves this show just as much," Boron said. "The show itself, it's been around for 75 years for a reason. Everyone loves it, from young to old."

Katie Riederer, an eighth-grader and veteran of the last two VCMS shows, "Flat Stanley" and "Willy Wonka," has big ruby slippers to fill in taking on the role of Dorothy made famous by Judy Garland. She called having the lead "exciting and nerve-wracking" and she plans to try to blend Garland and Riederer to make an innocent and pure character the audience will like.

It's no small task to produce a show everyone has seen and make it different.

"It's tough to find the balance sometimes between how much you want to emulate something that everyone knows so well and how much you want to put your own stamp on it," said Boron. The directors tried to let the kids put their own interpretations of the characters as much as possible, he added.

The young performers edition will run a little more than an hour and includes much of the famous dialogue the audience remembers. All the classic songs are in the show as well, plus the "Jitterbug," which Riederer calls a high point of in the VCMS show, a big dance number that Boron said was left on the cutting room floor from the MGM musical.

The production is notable for its colorful set and costumes. The cast includes approximately 75 munchkins, crows, and trees, not to mention a lion, scarecrow, tin man and witch.

"We've got so much help from everyone. Like the directors, they're always doing everything that they can to make sure this is the best performance it can be, and the makeup, we have so many amazing parents and helpers that come in for this show," said Fay.

"I'm very excited for it to happen because I feel that there are so many more props this year and so many more little itty-bitty details that are going to make the performance overall really fun to watch and to perform, and I know for a lot of people in the play, it's really nerve-wracking because they're trying to make it amazing," Fay said. "We know that it can all get there because so far all those little details are making it awesome."