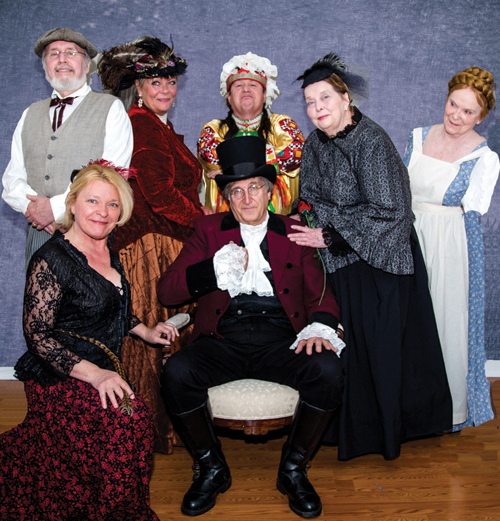 The Marble Orchard returns to the War of 1812

When the Lewiston Council on the Arts Marble Orchard Players presented the "Spirits of 1812" at the Hennepin Park Gazebo in Lewiston last summer, one young audience member couldn't contain his enthusiasm.

He told cast members that he never realized how much this area was involved in the War of 1812, and added that "if my teachers had taught history this way, I'd have done much better in high school."

The Marble Orchard is back at the gazebo at Fourth and Center streets this weekend with "Spirits of 1813," an updated version of the story of the burning of Lewiston in December 1813. Many of the characters, who represent actual residents of Lewiston of that time, are back for this year's show, along with several new ones.

Among the returning characters is Sacarissa, the Tuscarora chief, who sought peace, but when that failed, helped provide safety for fleeing Lewiston residents.

Sacarissa is played by Mark Porter, an Oneida from the Six Nations in Ontario. He's currently a resident of Niagara Falls and is known in the area as leader of the band Paleface (also his nickname).

"I read a lot of history and I found a lot of correlations between my life and his (Sacarissa's) life. A lot of things just spoke to me ... I felt right about it," Porter said.

His grandmother was a Tuscarora. His grandfather was a preacher, as was Sacarissa. Even his last name of Porter is connected. To receive handouts from the British, Native Americans were often appointed last names and Porter is a prominent name in area history.

"I think he was a good man," Porter says of Sacarissa. "He was very instrumental in communicating to the Tuscaroras about the importance of unity. That was one of things that was pivotal in having the Tuscarora help the Lewiston people."

Those arriving at the gazebo for the performance might notice a haunting scent in the air.

"I always burn sweet grass or sage ... we always smudge ... just to offer thanks for the day. It's not a given for us," Porter said, noting that people often take for granted their freedoms.

Bringing a new polish to the performance this year will be Kathleen Godwin, who has taken over her sister's role as director. Previous Marble Orchard shows have been ably directed by Lewiston Council on the Arts Artistic Director Eva Nicklas, who took advantage of Godwin's moving to Ransomville a year ago to have her share her experience with the local players.

Godwin has a degree in theater and for the past several years has often traveled to New York to audition for plays and commercials. She also is a narrator for audio books and started an art center in Pennsylvania.

Nicklas and Godwin took their parents, Ronnie and Sonja Jonsson of Lewiston, to Artpark's "The Sound of Music" this week. It was going to be difficult not to sing along, Godwin said before the show.

"It's going to take everything I have to keep Eva quiet," she joked.

Nicklas, Godwin and their sister Silva Malvasi of Syracuse as children grew up performing in New York and New Jersey. They spent nine months in Philadelphia performing in "The Sound of Music" as Captain Von Trapp's children.

Godwin has added props and music to the performance of "Spirits of 1813.

"The props help to describe and form the characters, and everybody loves music," she said.

She's enjoying the challenge of her job as director and the kind of creative atmosphere of the Marble Orchard Players, where cast members feel free to offer ideas and suggestions.

"I think this town is so lucky to have a group of committed volunteers who put themselves on the line in front of other folks and risk themselves to tell their stories, which are both human and historical," she said.