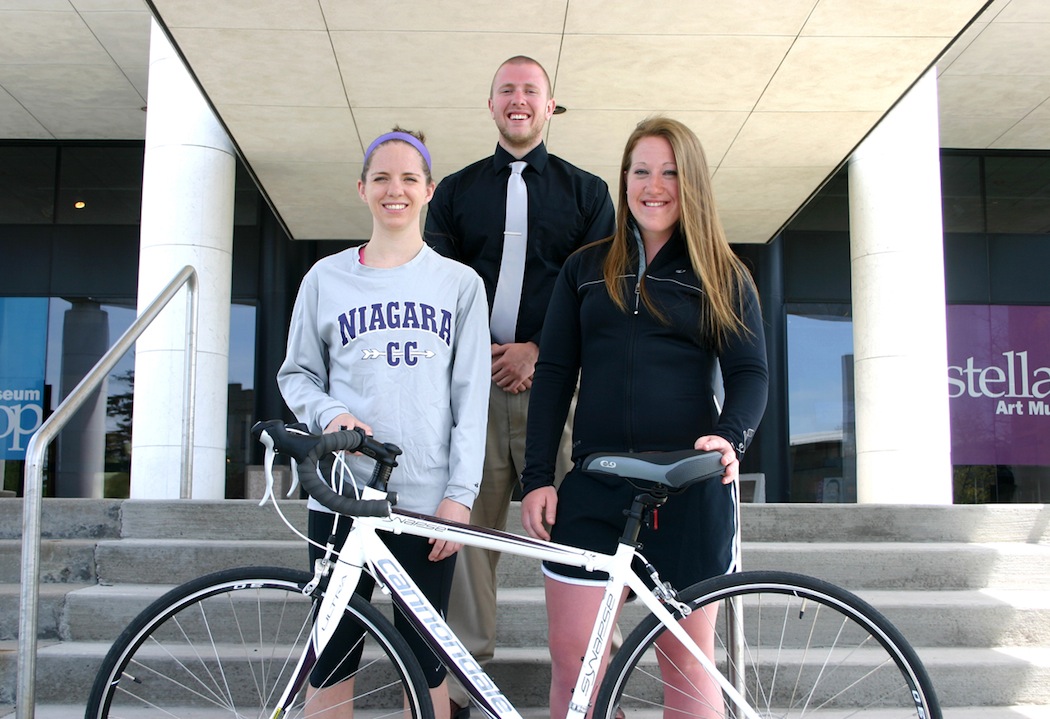 Niagara University seniors Nicole Mehlman and Catherine Cardinal are participating in the 4K for Cancer this summer, one year after classmate Vince Schiano raised more than $7,100 by riding a bicycle from Baltimore to San Francisco. Not pictured: Ashley Blossom.

Vince Schiano set off on a 4,000-mile bike ride last summer to raise money and awareness for young adults suffering from cancer.

Little did he know that his cross-country venture would also inspire three young women back "home" on Monteagle Ridge to join the cause this year.

NU seniors Catherine Cardinal and Nicole Mehlman and 2011 graduate Ashley Blossom are following in Schiano's tire tracks, having signed on to participate in the 4K for Cancer, a philanthropic activity affiliated with the Ulman Cancer Fund for Young Adults that provides support for cancer patients. The nonprofit program raised nearly $500,000 last summer, including more than $7,100 from Schiano's family and friends.

While 2013 marks the 12th year of the 4K for Cancer, this will be the first time that one group of participants will run across the country. The inaugural 4K for Cancer Run Across America will depart from the Golden Gate Bridge in San Francisco and finish in Baltimore's Inner Harbor. Runners will log 12 miles a day in one-mile increments.

In mid-June, Blossom will begin riding to Portland and Cardinal will start cycling to Seattle. Mehlman is part of the first team to run from San Francisco to Baltimore.

Incredible, huh? There's also this: Blossom, Cardinal and Mehlman barely know each other.

It's the cause that unites them.

Blossom graduated from NU in May 2011, but became connected to the 4K for Cancer through Schiano. She donated to his ride last summer and followed his journey through his blog posts and Facebook updates. The passion that Schiano had for the cause and the difference she saw in her friend - in terms of renewed priorities and bolstered confidence - convinced her that the 4K was worth looking into.

"The drive that Vince displayed prior to and during his ride, and the compassion he showed after the ride is really what inspired me," Blossom explained. "This is an opportunity of a lifetime to make a difference for young adults who have been affected by cancer. And this isn't just a local opportunity, it's a countrywide opportunity."

A Lockport native who majored in tourism and recreation at Niagara, Blossom currently works as the event coordinator at Becker Farms in Gasport, and manages accreditation with Populous, a well-known architectural firm in the sport industry. She was involved with cheerleading during her time on Monteagle Ridge, and says that studying at a Vincentian university influenced her decision to ride a bicycle across the country in support of a good cause.

"Though I had always taken part in community service and donated to various causes, studying at Niagara reiterated and stressed the importance of making a difference in the community, not only locally, but in the world," she said.

Blossom is fortunate to have never lost a family member to cancer. Her grandmother was diagnosed with breast cancer when Blossom was at an age that didn't allow her to fully grasp the magnitude of the disease. She is pleased to say that her grandmother is celebrating 10 years of being cancer-free.

However, in October 2010, Blossom's best friend's mother was diagnosed with Stage 4 ovarian cancer at age 53. She had a hysterectomy, but the cancer had already metastasized to her brain. On New Year's Eve of that year, Blossom's best friend lost her mother, only two months after the disease was detected.

"It is tough to stand on the sidelines and watch what this disease does to the patient, and sometimes the effect even seems worse on the family and friends involved," Blossom said. "Cancer touches lives in different ways. I am riding the 4k for Cancer for everyone who has been touched by cancer.

"I have no doubt that riding cross-country is going to be challenging," she added, "but the purpose behind it will remind me to keep pushing myself, and keep pedaling."

Catherine Cardinal wasn't one of the dozens of students in attendance during a 4K for Cancer information session Schiano held last fall. Why should she be, considering she had already committed to the 70-day, 4,000-mile bike ride moments after hearing Schiano talk about it the previous May?

The soft-spoken criminal justice major has very good reasons for not hesitating to join the fight.

"Cancer is something that really hits close to home," said Cardinal, whose grandmother forged a long battle with breast cancer before passing in 2005. Her best friend overcame leukemia after being diagnosed at age 5. And Cardinal's mother is currently embroiled in a three-year battle with cancer-related issues.

"I spent Christmas Eve last year in the hospital with my mom after she had surgery to have polyps removed from her colon that were thought to be cancerous. This has been really hard on my family," she said.

Cardinal, a senior, is used to getting involved and helping others. At Niagara, she's a community adviser in Varsity Village, and is part of numerous university clubs, including NUCAP, the Campus Programming Board, club rugby and the university ball.

To prepare herself to cycle from Baltimore to Seattle, Cardinal trains for at least two hours every day in the Kiernan Center.

"I have seen her in the Kiernan Center a lot and taken note of her persistence," said Schiano, who recently organized another fundraiser for the Ulman Fund. "Just from working with Cat as a former community adviser, I know she has a very positive mindset, which is critical on the ride."

As a child, Cardinal spent Saturday mornings performing community service in her hometown of Freeville, N.Y. To Cardinal, the 4K is a whole new way to think about serving those in need.

"Cancer affects everyone in some way," she said. "This trip is one that I will be putting my whole body, mind and soul into, and it will not be easy, but neither is fighting cancer. I plan to keep this in mind and use it as my motivation to keep moving forward in the journey.

"Cancer is a fear of mine as I am sure it is for many other people. I want to be strength for those who are experiencing the effects of cancer."

Nicole Mehlman started running for the cross-country team as a freshman at Penridge High School in Perkasie, Pa. She quickly became hooked on the sport, later parlaying that passion into an opportunity to join the D-I program at Niagara University, where she ran for four years.

Mehlman's love for running didn't cease with the completion of her senior season at NU; conversely, she was searching for something, anything with purpose, to fill that competitive void. She found it in the 4K.

"Cross-country has given me so much, and I want to use the sport I love to give back," she explained. "I am dedicating this run to the people I am going to meet through the 4K, the people suffering who would love to be able to run 4,000 miles. I hope that, with the money raised, more people will be able to run, to exercise and to live the life they deserve to have."

Mehlman, too, has had several people close to her touched by cancer. Her grandfather, a Korean War veteran who loves to discuss Philadelphia sports with his granddaughter, recently recovered from skin cancer. ("He is my absolute idol.")

Mehlman's aunt, a mother of three who teaches underprivileged high school students, was diagnosed with breast cancer in October. She underwent a double-mastectomy and has since been deemed cancer-free. ("She's a hero. Many of her students are the first in their families to graduate high school and go to college - because of her.")

When Mehlman turned 21 last May, she went out and celebrated like many do when they reach legal drinking age. Unlike most, though, she downplayed her birthday to commemorate the fact that her neighbor had been in remission from throat cancer for five years. She also participated in a Relay For Life in his honor. ("I knew that his milestone was far more important than mine.")

Somehow, despite being classmates with the same major (communication studies), Mehlman and Schiano had never taken a course together, and were never introduced. That changed this fall when they worked together on a group project. The more they talked, the more Mehlman learned about the 4K for Cancer. By October, she was signed up.

"My parents were so supportive; they're the most supportive people in the whole world. I wouldn't be able to do this without them," said Mehlman, who will also graduate with a minor in sport management. "My mom had like 50,000 questions and my dad was just like, 'OK, let's do this!' "

Within weeks of signing up, Mehlman was asked to serve as co-director of the first 4K for Cancer Run Across America. She supplements twice-weekly cross-training sessions with Schiano with four to five days of running each week, including one "long run" of 10-plus miles. On May 26, she'll warm up for the 4K by participating in her first half marathon in downtown Buffalo.

Just less than three weeks later - on June 15, her mother's birthday, she'll lace her sneakers back up and begin striding through 11 states.

According to Schiano, that's when Blossom, Cardinal and Mehlman will commence what he can only describe as a "life-changing experience."

"The ride was the most life-changing thing I've ever done," Schiano said. "I realized how blessed I am, and was inspired to do more in the community, helping as many people as possible.

"The largest piece of advice that I have given to the ladies is to never give up, no matter what obstacle is in front of you. When fundraising, you may think that you're not going to reach your goal. When you're biking or running, you may feel that the hills are just too steep. The biggest thing to remember during these times of struggle is that someone with cancer is fighting their battle. If they're going to keep fighting for their lives, we must keep fighting as well."