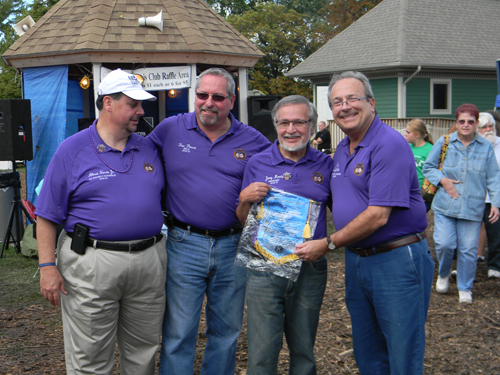 Submitted by the Niagara River Region Chamber of Commerce

The Niagara River Region Chamber of Commerce will recognize 10 area individuals and businesses at its annual Chamber Awards Gala, Friday, May 17, at the Niagara Falls Country Club in Lewiston.

In addition to the tributes, the annual event will feature an evening of live music, a silent auction, table wines donated by local wineries and businesses, and hors d'oeuvres followed by a sit-down dinner.

Village of Lewiston Citizen of the Year

Village of Lewiston Mayor Terry Collesano has selected Dr. Jerry Mosey as the 2013 Village of Lewiston Citizen of the Year. With an impressive list a mile long of his work and volunteer experience, Mosey enjoys being involved and making a positive impact on area youth.

An educator for more than 50 years, Mosey has taught all ages and grade levels. Through his career he taught in Catholic schools around the area, and also attended seminary. Mosey is currently an adjunct professor at Niagara University where he teaches education methodology classes to prospective educators.

As an active member in the Kiwanis Club of Lewiston, Mosey continues to volunteer his time to help in the mission of providing for today's youth. He held the president position within the club, from October 2011 through the end of September 2012, and now serves on the board in the title of immediate past president. Countless hours are given by Mosey through this organization to make a difference in the children of the community.

Involvement in the arts has been a part of Mosey's life for as long as he can remember. Growing up in a musical family led to a natural progression of acting and singing as a trained musician. He is a member of the choir as well as lector and Eucharistic minister at Our Lady of Fatima Shrine. The Lewiston Council on the Arts also is an organization Mosey is involved in, serving on the advisory board and as an actor with the Marble Orchard Ghost Walks (as Sherbourne Piper), and the Marble Orchard Spirits of 1812 (as Sparrow Sage).

Additional on-stage roles include the character Drake the Butler in "Annie" (with special recognition from the Theater Association of New York State), as well as Scrooge in "A Christmas Carol." Both productions were presented by Theatre in the Mist, where Mosey also serves on the board of directors as vice chairman

The role of Scrooge was one Mosey had really looked forward to playing, as it was on his "bucket list" of things to do. He is looking forward to directing "The Gift of the Magi" production in December.

Mosey also serves as a commissioner on the Niagara Frontier State Park, Recreation and Historic Preservation Committee. And he serves as board chair of the Lewiston Committee of Parks and Recreation. Additional local organizations he has been involved with include Rivershore and the Loyal Order of the Moose.

Mosey has lived in the Village of Lewiston for approximately seven years. He enjoys walking through the village and attending a variety of live concerts and music events you can find on any given day in Lewiston.

The organizations he is a part of are lucky to have him. "Jerry is an outstanding individual, an asset to our community. A person very involved here, Jerry is an active performer in the arts and a leader. He has proved that in his active role as president of the Lewiston Kiwanis Club with all of the great things he has done," commented Collesano.