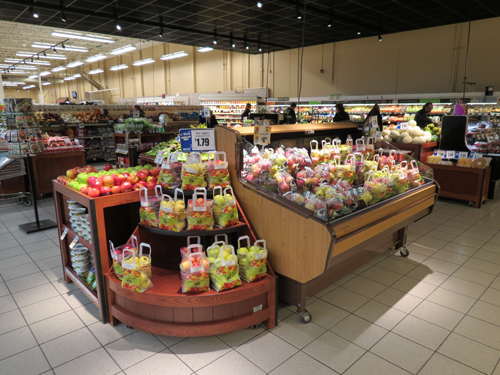 Shoppers at DiMino Tops Lewiston have begun to notice some changes to their supermarket. Owner Anthony DiMino said the best is yet to come.

Shoppers at DiMino Tops Lewiston have begun to notice some changes to their supermarket.

In a few short weeks, customers will notice some aesthetic alterations. DiMino plans to change the store's color scheme from bright grays and whites to beige, brown and burnt orange.

"When we do the new décor package, we'll get all new aisle markers, and then we'll have two large aisle markers that will show the whole description of the store, which we never had before," he said.

These changes, while noticeable, are just the tip of the iceberg.

Much of Tops' produce will be refrigerated, either within a stand or behind glass doors.

"We're going to have 20 door cases," DiMino said. "A large part of our produce department is going to be in doors. In having them in doors, it's going to make some commodities even more stable."

Lettuce, for example, which is affected by sitting out on a sales floor, will last longer behind glass doors.

"It actually keeps better in a back cooler where it's not constantly touched," DiMino said. "In a closed door case, it's going to be at a more constant temperature, which is going to create a fresher and longer lasting product when they pick it up."

Another item set to be encased is mushrooms. Potatoes will be kept cool, too.

"We're putting a whole new vegetable commodity in; we're going to have potatoes in refrigeration - I've seen that out west," DiMino said. "We're going to have more items; more organic items than we ever had before.

"We're actually sitting down with some of our restaurant owners to find out what odd items they're looking for that they're using. Because if you look at all the cooking shows, more and more people are getting to these cooking challenges and things. They're using more and more not only organic items, but unusual items - things that you wouldn't normally realize."

"There are just a large variety of different shapes and sizes of potatoes," DiMino said, pointing to a picture of a case with rows and rows of tubers. "This is how my potato section is supposed to look when it's done."

Tops is making room to add these new elements by tearing down its existing section. Some changes have begun; others will start the day after Easter. DiMino said he doesn't expect the "construction" will have any impact on the shopping experience.

Pods already are in place for some hardier, faster-moving items, like apples, which will not be kept cold. These portable stands can be moved to rearrange the produce lineup or showcase new and seasonal items.

DiMino said that, across stores, one generally finds the same produce. But different displays or arrangements affect what's purchased.

"I think (new displays will be) more exciting to the consumer because, after a while, you look at the same thing over and over again, it gets kind of stale," DiMino said. "They're looking for seasonality; changes. So, aesthetically, it's going to look tremendous."

"We're going to add a lot of new items; some high-end items; more variety in the commodities," he added.

Tops is looking for more farmer's market-type goods, too. Beyond that, "We're changing our deli cases and going with a little different merchandising on deli," DiMino said. "Flipping the cases around to add some new items."

For those with a sweet tooth, DiMino said, "We're going back to (from-)scratch doughnuts."

"We're going to fry our own doughnuts again," he said. "That's probably going to start, hopefully, right around the Fourth of July. ... That's going to be a major change, frying doughnuts again."

Internally, "We should be updated to exactly what every other major supermarket in Western New York will look like, and that's great for the Village and the Town of Lewiston," DiMino said.

To the right of the store's lobby, Tops has recently made improvements to its bottle return room.

"We also just replaced every bottle and can machine in our arsenal," DiMino said. "We have the most up-to-date recycling machines. They're twice as fast. I haven't had a complaint."

Though Tops is a popular destination for Lewiston shoppers, DiMino said there is always room for improvement.

"I am doing this because I need to serve my customer better," he said. "Definitely produce was an area where customer perception was less than favorable."

With Tops' new refrigeration system, "The changes that we're making should directly create even a better, fresher item when you show up at the store," he said.

"We will be as up-to-date as any grocery store chain in the United States, which, in a small community, everybody should be pretty proud of that," DiMino said.

Store shoppers speaking with the Sentinel, who wished to remain unnamed, said they are excited about the upcoming produce changes.

DiMino plans to hold a grand reopening on Mother's Day, Sunday, May 12.