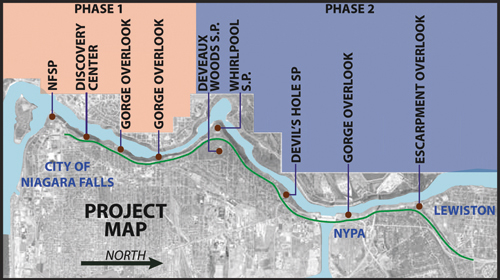 Three remaining Robert Moses Parkway North alternative designs are in agreement regarding the section of roadway between Main Street and Findlay Drive. (Image courtesy of the scoping report presentation.)

Interests from both Niagara Falls and the River Region expressed satisfaction Wednesday with the three remaining Robert Moses Parkway North alternative designs. At an open house inside the Conference & Event Center, State Sen. George Maziarz, Assemblyman John Ceretto and Niagara Falls Mayor Paul Dyster spoke favorably of the designs - each of which calls for the ultimate removal of RMP road from Main Street to Findlay Drive.

Alternative No. 6 calls for complete removal of the RMP from Niagara Falls to Lewiston. Alternative No. 4 suggests a combination of existing parkway, a new road and portions of Lewiston Road along that same path. Alternative No. 3, which suggests keeping the existing RMP between Findlay Drive and Lewiston, received the most support from Maziarz, Ceretto and Mark Thomas, the Office of Parks, Recreation and Historic Preservation western district director.

"I've been very vocal, for a number of years now, that ... alternative three was the way to go, which was redesigning the parkway from Findlay Drive on to Main Street into the city," Maziarz said. "I can tell you that I had the occasion in August, September and October going door-to-door in the City of Niagara Falls - particularly in the DeVeaux neighborhood - and people in DeVeaux were very strong about not wanting additional thousands of cars into the DeVeaux neighborhood (Lewiston Road would become a main thoroughfare under design No. 6); air quality issues; safety issues regarding traffic coming by the Maple Avenue School. This was a proposal, really, that was supported (a) long time by the Parkway Preservation Committee and Lewiston and Porter, was (to) redesign the parkway from Findlay Drive into the city."

"This Robert Moses Parkway, I think, has become a symbolic challenge for our community, trying to find a consensus to move forward with some sort of project that we could all agree on," Dyster said. "What's basically happened here - and maybe this is just a happy coincidence - but the three alternatives that are being advanced all have a common element in them, and that is the removal of the Robert Moses Parkway as it currently exists between Main and Findlay, and its replacement with some sort of a scenic boulevard on the alignment more or less of the existing Whirlpool Street. And that's something that is very important to us as the city, because we have a lot of reasons to want that part of the project to move quickly."

Christopher Schoepflin, president of USA Niagara Development Corp., said, "I think it's a really good day for Niagara Falls and its northern neighbors. The three alternatives going forward not only pay attention to the Niagara Falls waterfront, but it also deals with the very vital north-south connectivity to Lewiston and Youngstown."

"We don't mind reconfiguration, as long as it's a basic change that everyone can live with," said former Village of Lewiston Mayor Richard Soluri, speaking on behalf of the Parkway Preservation Committee.

"I also support, along with Sen. Maziarz, No. 3, that there's this reconfiguration from Findlay to Main Street, and then we keep the Robert Moses Parkway at some end from the rest on to service the other areas," Ceretto added. "I'm also excited that all three plans today that we're looking at opens up the waterfront in downtown Niagara Falls. I see growth to our businesses coming from the waterfront areas inland toward the city to Main Street."

In phase one of the design and construction process, the common points shared among the three alternatives include an expansion of the Discovery Center and the Aquarium of Niagara's footprint; the connection of these tourism destinations and the Maid of the Mist via a new shared park road entrance; a redesign of Whirlpool Street as a park-like road; new curbside overlooks, stairs and ramps to the lower level of the former RMP; the removal of the Whirlpool overpass; park road intersection at Findlay Drive; a new multimodal trail designed to tie into all intersecting sidewalks; and native landscape restoration on reclaimed pavement areas.

"It allows us to deal with transportation in a way that gets the traffic where it needs to go, but also beautifies that entire zone and eliminates lanes of traffic, which are certainly not in any need in this day and age."

It will cost an estimated $17.8 million to complete phase one. The panel of speakers was encouraged that financing could come "sooner, rather than later," as Dyster said. Maziarz and Ceretto said funding could come from Gov. Andrew Cuomo and the "Buffalo Billion" initiative. The state senator also suggested utilizing the Niagara Falls Bridge Commission and Greenway money.

Six alternative designs were presented and discussed at an open house in June 2011 at the Niagara Falls Public Library. Public feedback was recorded and, per the directive of project stakeholders (State Parks, the State Department of Transportation, USA Niagara and the City of Niagara Falls), Parsons Transportation Group narrowed the field to three alternative designs.

When asked why it took 20 months to get to the next stage of the scoping process, Thomas said, "It's a tremendous amount of work."

"First of all, the study work had to be completed," he explained. "All of the comments that were put in from the last public meeting that we had at the library were massive, and all those had to be responded to. They're in the (draft scoping report) document. There's traffic studies; engineering work that had to be done in terms of determining whether the options were viable. So, there was a lot of work that went into this. And then all the partners had to come to a consensus that we wanted to move forward with the alternates that are in front of the public today. It's a lot of work, and it's wrapped up now to the point where we're back to the public for comment."

The next step in reconfiguring the RMP is "to finish the work up," Thomas said. "To take the public comments, respond to those again in the document, publish the final (scoping report), and then while we're doing that, we'll be raising the money for the engineering designs to move forward."

No one should expect to see drastic changes on the RMP in the immediate future. Stakeholders and corridor project consultants have said that, even in a best-case scenario, construction would not begin until late 2014 or early 2015.

Most of the talk Wednesday centered on the section of road from Findlay Drive to Main Street. There was little discussion on what will become of the RMP leading to Lewiston and Youngstown. In alternative No. 3, this second phase would cost an estimated $34.2 million (for a total project cost of $52 million) to, among other things, redesign a park road. Alternative No. 4, and its new hybrid roadway to the River Region, would cost $30.2 million ($49 million total). Alternative No. 6, the removal of the RMP, would cost $15.5 million ($33 million total).

Thomas Donohue of Parsons said the Federal Highway Administration could become a major participant in the funding. He also said phase one could be approved and carried out concurrently with phase two planning.

Dyster said the key to moving forward with phase one is "people being willing to postpone their disagreements with what happens north of Findlay into this next phase of discussion."

>>Click here for complete details on the draft scoping report, the three remaining alternative designs and a project timetable.