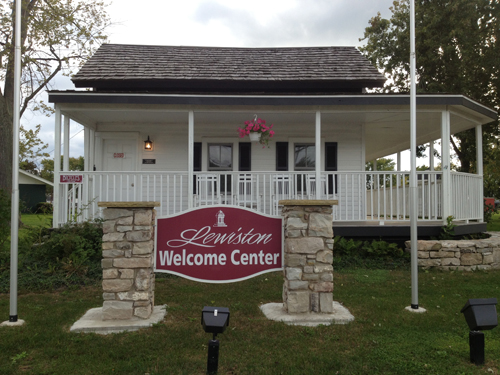 Chamber of Commerce set to move into Lewiston Welcome Center

The Village of Lewiston and the Niagara River Region Chamber of Commerce are about to finalize a deal wherein the tourism and event-planning organization will move into the Lewiston Welcome Center. The chamber will be responsible for heating, electric and technology costs, but will not be charged rent, nor will it pay water or sewer fees.

"It's a perfect fit for the chamber and the village, working together to man the visitor center and save both of us a little bit of money on rent and funding," said George Osborne, Chamber of Commerce board chairman. "We probably would've moved in there sooner if we didn't have a current lease. I believe it will bode very well for both the chamber and the village in the future."

For five years, the Chamber of Commerce has worked out of 100 N. Third St. But its lease with Town of Lewiston Justice Thomas Sheeran expires in December. As such, the group's executive board decided to explore alternative locations.

"The space we're currently in was very good for us," Osborne said. "Larger than we needed, because we've downsized our staff a little bit in the last couple years, and we sublet the upstairs. But it worked out very well, and our landlord was very good to work with. We aren't moving for that reason. We're moving because it's a better way to work with the village and have a little bit more visible space, and it's costing us a lot less money."

The chamber's rent last year was $1,500 per month ($18,000 total). Caesars Entertainment rented the upstairs offices, providing the chamber with $500 each month.

It's long been the desire of the Village Board to have the chamber located inside the Lewiston Welcome Center, which moved to 895 Center St., in November 2009 and formally opened in May 2011.

"That's the way it should be; that's the way it used to be," Village of Lewiston Mayor Terry Collesano told Osborne and Chamber of Commerce President Jennifer Pauly when the two sides met Monday.

The chamber had previously been located in the village-owned Little Yellow House at 476 Center St. In 2007, the municipality paid the chamber's rent and provided an additional $4,750 to the agency.

Now, in addition to waiving the chamber's rent, water and sewer fees, the Village of Lewiston will contribute $4,000 annually to the chamber from 2014 to 2017. The village will take between $1,200 and $1,500 of the $4,000 next year to finish restoring the Lewiston Welcome Center's top floor.

"It's a win-win situation for both of us in this respect: It's saving the chamber money. It's saving the village money," Collesano said Thursday. "Also, it's a good marriage between the two. We were together, more or less before, when they were (in) the Little Yellow House. The welcome center and the chamber being together is a perfect fit. It's a perfect fit for everyone. So I think it's going to work very well. I really do."

Once situated at the start of Lewiston's commercial district, Collesano said the chamber "is going to have more people, more walk-ins than they are getting now, which is good for the chamber, and it's good for the community."

Both the Village Board and the chamber will utilize the volunteers now working inside the visitor center, especially in keeping the building open on weekends from March through the holiday season.

Trustees are expected to vote in favor of the lease agreement at their 6 p.m. meeting on Monday.