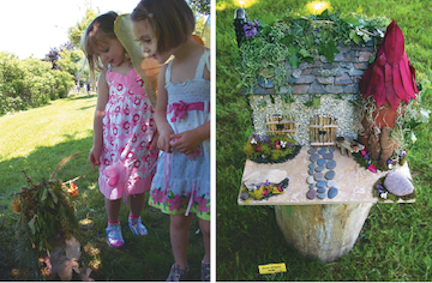 Images of the 2011 "Fairy House Festival" at Artpark. (file photos)

Epic concerts, Broadway-quality musicals and performances by world-class musicians - these are the things that put Artpark on the global map, and placed the Lewiston facility at the head of the class for Western New York performing arts venues.

"Last year's event was our first annual and we did not know what to expect," Stimson said. "It is like having a party and being scared no one will come."

Fortunately, "We had over 3,000 people and the atmosphere was beautiful and reminiscent of old Artpark days when they had large-scale children's and arts activities all year round," she said. "The weather was perfect - it was such a positive, nature-based and relaxed affair. We had so much positive feedback. It was a lot of work, but we are thrilled that is has taken off."

"It's a great one," she said. "Susan has done a fabulous job in getting the whole community involved - from schoolchildren to artists - building fairy houses.

"She was inspired by the first event. She came out to Port Smith, New Hampshire, where we did our first fairy house event ever - I did with a community back eight years ago. And when Susan came to see it, she thought it was a perfect venue for Artpark."

Fairy houses are miniature structures built with all-natural ingredients - sticks, stones, moss, leaves, pine cones - that kind of thing. Kane came up with the idea to bring her story to life, in part, through her surroundings. She was living in New Hampshire and noticed little structures built in "tiny little woods."

Her main impetus, however, was to disconnect children from their iPads and Xboxs and reconnect them with nature.

"It sort of builds upon their five senses going outside," Kane said. "And building fairy houses you experience them all."

"It's a great way for a young child to build on the learning blocks," she added. "It's a good way for them to start versus going into the two-dimensional concept right away. ... Actually getting outside and physically engaging is just an important part of the learning process."

Since its inception, the "Fairy House Festival" has been staged in a half-dozen states. Kane said Artpark's rendition is as good as any she's seen.

"They did a fabulous job," she said. "It was very hard to pull it off the first time, especially, because ... most people don't know what a fairy house is, much less a fairy house event.

"I think she had about - I would guess 75 houses around to view - between the schoolchildren's and the Girl Scouts and the artists and different groups, garden groups, that had contributed fairy houses. They were amazing fairy houses, too. Right on par with the best I've seen."

Artpark's "Fairy House Festival" has expanded to two days this summer. It runs from noon until 5 p.m. both days this weekend.

"We think this festival will continue to grow every year," Stimson said. "We have it two days this year to, first, give us a break if weather is bad one of the days. And then another (is to) give people a chance to have two days to choose from. As we know, families are very busy and have a lot to choose from."

She said Artpark's second "Fairy House Festival" will boast plenty of activities for children and families.

"This year we, once again, have Tracy Kane back with us and her new book ('Fairy Houses ... Unbelievable!') features some of last year's Artpark fairy houses," Stimson said. "We have a wonderful storyteller and also Lewiston Dance with us doing even more performances. Also, we have a unicorn - yes, they do exist.

"We know what works now, and so we can continue to make the festival grow - yet at the same time, keeping it simple and connected to the beautiful park and getting kids to be interested in being outside and active with nature."

While Kane has no complaints about what she saw in year one, there is something, or rather someone, she'd like to see more of in year two.

"For some reason, parents think it's a girl thing," she said. "And boys are some of the most creative builders."

"I just try to encourage (a) whole family venue," she said. "Because you will find boys, really, just as interested. Sometimes we call them 'gnome homes' or 'toad houses.' But they're into it. They just have to be allowed the opportunity."

Those with premade fairy houses are welcome to display them this weekend at Artpark. Those families just beginning - or just learning about such things - are invited to come to the park and build a fairy house from scratch.

"The Fairy House Festival" returns to Artpark on June 9 and 10.

From noon until 5 p.m. each day, the event will feature art activities; hundreds of fairy houses designed by schools, Scout troops and community youth groups; special dance performances; artist-created exhibits; storytelling; and magical surprises. Tickets are $5 in advance ($6 day of festival) and are on sale now.

For more information on fairy houses, Kane or her books, visit http://www.fairyhouses.com/.