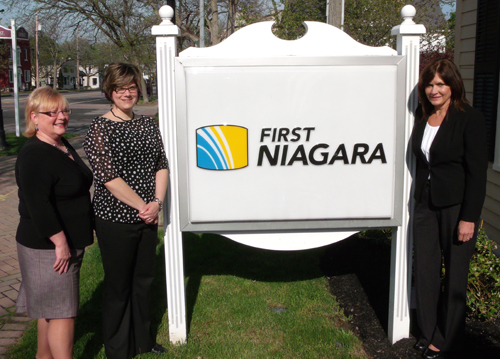 First Niagara Bank, Lewiston branch, was chosen for the 2012 Chairman's Award by the Niagara River Region Chamber of Commerce board of directors and chairman of the board, George Osborne.

It is clear why Osborne chose First Niagara Lewiston as the recipient of the Chairman's Award. "From its beginning as Lockport Savings Bank to its dramatic ascension to the largest bank in Western New York, First Niagara has been and remains an outstanding customer and community service-oriented institution, and since opening its branch in Lewiston it has played a major role in supporting the many and varied activities in the Niagara River Region. First Niagara is most deserving of this prestigious award."

The location captures the village charm and community spirit of Lewiston - built in 1845 by Dr. Edward Smith, who lived and practiced there his entire life. Likewise, Dr. H. Selzer used the building for his home/office until his death in 1995. The building went through several renovations, however it still retains historical significance. The original carriage steps are still located in front of the bank.

Community involvement is a priority for First Niagara Lewiston according to Baker, and is key to their success here. Involvement in local board of director positions, committees, sponsorships and volunteering in community initiatives has helped make the Lewiston branch an important part of the area as they contribute to the quality of life in the community. First Niagara's philanthropic mission is to support and empower not-for-profit organizations with financial backing, employee volunteers and board representation. They believe that it is their responsibility to give resources, expertise, and helping hands to the communities where they do business. A thriving community is critical to the success of their branches.

First Niagara is a major sponsor of Artpark's "Tuesday in the Park" summer concert series, the Lewiston Jazz Festival and a number of other community programs in the Niagara River Region. They feel privileged to be able to support hundreds of charitable organizations across their footprint, providing millions of dollars, thousands of volunteer hours and professional expertise to community partners.

At present, the Lewiston branch has four full-time and four part-time employees. Upon completion of the HSBC acquisition on May 21, two more full-time positions were added. The Lewiston branch is open Monday through Friday, and also has Saturday hours from 9 a.m. to noon.