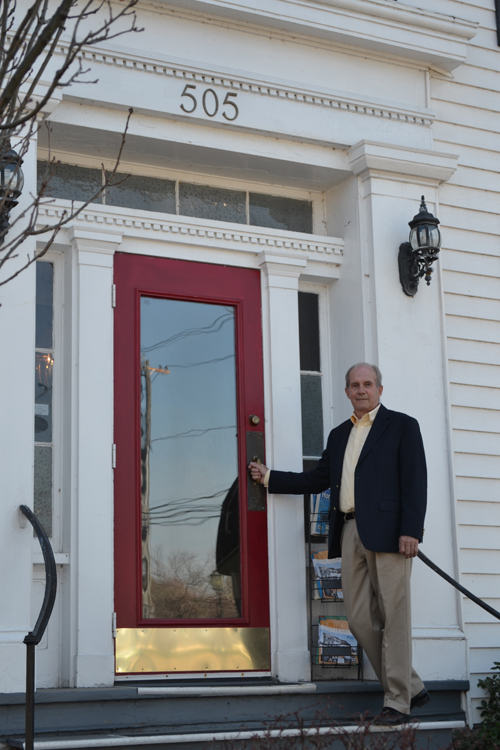 Robert Welch, shown outside of what was once his maternal great-great grandfather's home on Center Street.

2012 Chamber Gala: Robert Hotchkiss Welch is Village of Lewiston Citizen of the Year

2012 Village of Lewiston Citizen of the Year

Mayor Terry Collesano has selected Robert "Bob" Hotchkiss Welch as the 2012 Village of Lewiston Citizen of the Year.

Welch hails from two of the region's most respected and impressive families and is one of the last of Lewiston's "blue bloods." (Welch is pictured in front of his maternal great-great-grandfather's home on Center Street.)

What is now the office for RealtyUSA was once the William Hotchkiss homestead. Hotchkiss was a lawyer and judge and he built the Long House, the Short House and what is now DiCamillo Bakery. These were built as part of the Lewiston renaissance after the burning of Lewiston during the War of 1812. Hotchkiss was also the first president of the Village of Lewiston.

Past historians have noted that Hotchkiss is remembered as a peacemaker, always advising his neighbors to settle their differences without going to court.

Bob's great uncle was Thomas V. Welch, a New York State Assemblyman who served as the first superintendent of the New York State Reservation at Niagara, holding the post for 18 years. He was a key player in the efforts to acquire the lands adjoining Niagara Falls, which has protected the land around the Falls and allowed it to remain free for all to view.

While Welch's heritage is very impressive, Collesano selected him as this year's Citizen of the Year because of his outstanding volunteer service to several organizations in Lewiston, including the Historical Association, the Niagara River Region Chamber of Commerce and the Lewiston Jazz Festival.

Welch has been a member of the Historical Association of Lewiston's board of trustees for the past two years. He is for all intents and purposes, the volunteer facility's manager for the Lewiston museum. He continues to maintain the grounds and helped to renovate the executive offices. He painted and dry-walled and added trim to the new Lewiston Welcome Center in Academy Park. His most recent project that he has dedicated countless hours to is the complete restoration of the Lewiston Toll Booth, which stood on the American side of the Lewiston-Queenston Bridge. It was built in 1898. Welch serves on the 1812 Bicentennial Committee for HAL and volunteers for "Flames Through Lewiston" in December. Beyond his work with the Historical Association of Lewiston, he spent countless hours painting the offices of the Niagara River Region Chamber of Commerce and assisted with the Christmas Walk. Welch is also a dedicated Jazz Festival volunteer and works on getting Center Street ready for this event.

With the exception of the four years he spent serving his country in the U.S. Coast Guard, Welch has lived his entire life within the village's one-square mile and by all accounts he is a model citizen. His wife, Anne, has been the clerk for the village for nearly three decades. They are the parents of three children, Robert, Michael and Michele, and the grandparents of three - with another on the way.

According to Mayor Collesano, "It's individuals such as Bob who deserve this award. Like his parents and ancestors, he is part of our history and it pleases me that he carries on the tradition of service here in the Village. We appreciate all he has done to help make Lewiston such a special place to live."