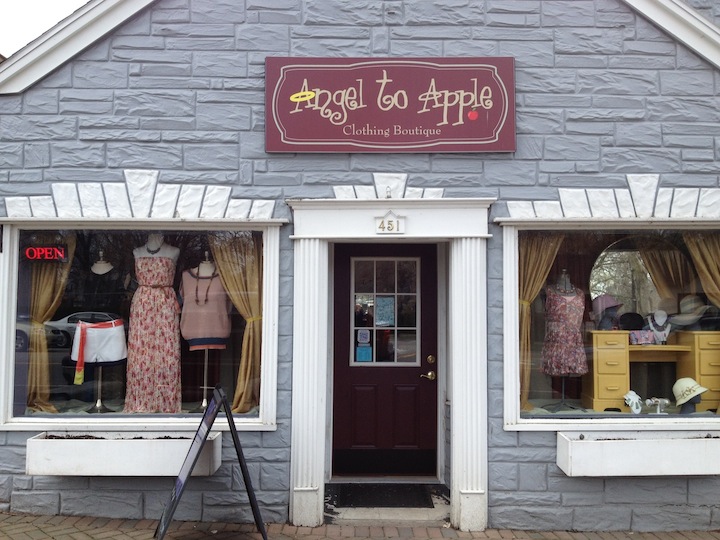 2012 Chamber Gala: Angel to Apple 'a real asset' to Lewiston

This week, the Sentinel begins its profiles of this year's honorees.

Lewiston Business of the Year - Angel to Apple

If the FBI ever needs a fashion consultant, the bureau's first call will be to Angel to Apple owner Jamie Symmonds.

The Village of Lewiston business owner has degrees in psychology and criminal justice. She is smart, creative, savvy, meticulous and, "That's all I ever wanted to be was an investigator," Symmonds says.

She would be a perfect fit with the FBI.

Of course, her life has taken a different path, into fashion and business. It wasn't an unpleasant turn - "I guess I've always been into fashion - even as a little girl," she says. It was, however, an unexpected move.

Following Symmonds' time as a graduate student at Chapman University in Orange County, Calif., she decided to move back home to Lewiston. Symmonds missed her mother, Rachael Schebell, and the rest of her family.

"I think, you grow up in a small town like this, and you think there's this whole big world out there. And then you go and experience the big, old world and you realize that this is home and this is where I want to be," she says.

While Symmonds was happy to reunite with her family, she was unable to find work in her academic fields. But it was during her job search that something different and exciting suddenly sprang up.

"One day I was out walking in the middle of winter. I saw a 'For rent' sign," she says. "And unfortunately - or fortunately - in life, I have an impulsive side. When I get something in my mind - no matter what it is - it's very hard to let go."

In this case, it was an available storefront at 744 Center St., and the opportunity for Symmonds to open her own clothing boutique.

"I just had it in my mind that we didn't have clothing boutiques in Niagara County. I had this idea (to bring) L.A. back here," she says. "I took a leap of faith."

Symmonds says her four years in California "opened up my eyes to a whole new world of fashion - and the true, in my opinion, true meaning of fashion, and being a unique individual when it comes to fashion and styling."

"One of the things I thought I'd miss most about California was the shopping, because out there you don't really do the mall shopping thing," she explains. "There's little mom and pops, boutiques everywhere - for everything. I just fell in love with that. Everything was different. You wouldn't go from one store to the other and see the same thing. And that's what I loved."

"When I moved home I kept thinking, 'Where am I going to shop now?' " Symmonds says.

When she opened Angel to Apple in May 2006, "I vividly remember thinking, 'Dear God, did I make a mistake? Are people going to come?' " Symmonds says.

Fortunately, "We couldn't believe how many people came," she says. "They started coming right away. I was pleasantly surprised.

"It's continued to grow every year since."

By October 2010, Angel to Apple had outgrown its space. Symmonds packed up and moved down to 451 Center St. Today, her store is thriving and her new website, www.angeltoapple.com, is generating online buzz.

Angel to Apple is Lewiston's 2012 business of the year. Symmonds and longtime employee Kelly Hessinger were recognized for their hard work, dedication to customers and efforts to bolster business in the village.

"The support I receive is infinite, from my customers, family (her mom, in particular), and close friends. I feel like this recognition is as much for them as it is for me, because without them there would be no Angel to Apple. I am one very lucky lady," Symmonds says.

From a business perspective, her success is due, in part, to her planning.

"When I'm going shopping for the store, every single item I pick, there is actually a reason in my mind behind why I picked that item," she says. "I really take especial effort in picking each individual item, picking who's going to wear it, how it's going to flatter a woman, what's the trends out there."

"I like to think that it's the customer service," Symmonds says. "Being in a small town, the customers become like friends. They really do. I try to go above and beyond with customers."

Lewiston seamstress Mary Leach can vouch for Symmonds' work ethic. She says Symmonds shows up on time, and offers "a better line of clothing."

When Leach's workspace flooded last year, she turned to Symmonds for help.

"I was in a desperate situation, where I had no place to do my fittings," Leach says. "I asked her if she would help me. There was absolutely no hesitation."

Nor was there any compensation. Leach used Angel to Apple's fitting room for more than three months. But when she offered to pay Symmonds, she was rebuffed.

Leach says, "It's a trusting relationship that you don't have with every small business."

"It's just not about making money with her," she says.

"She's a real asset to the little Village of Lewiston," Leach notes.

At the end of the day, Symmonds' motivation is simple.

"It's very important to me that businesses in this area succeed," she says. "So if I can ever help any other business, I try my best to do so."

"I love Lewiston, and I really, really just want the best for this village," Symmonds adds.