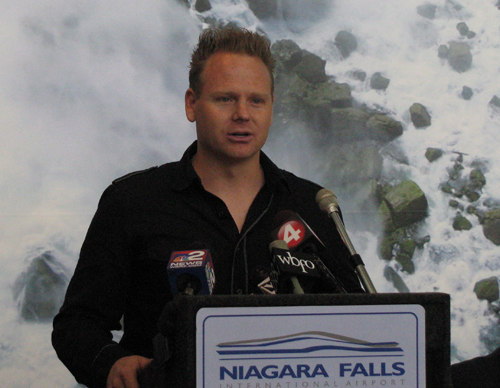 The eyes of the world will be on Niagara Falls this year as Nik Wallenda steps out onto a tightrope to walk between Goat Island in the U.S. and Table Rock in Canada.

Many details, including the actual date, have yet to be settled, but Wallenda and local and Canadian officials celebrated the announcement of the walk at a press conference Thursday morning at Niagara Falls International Airport.

Wallenda said he had been up late the night before and up early that morning taking calls about the walk from as far away as Australia and China after the Niagara Parks Commission in Ontario finally gave approval for his walk on Wednesday. The independent Canadian commission previously had turned down Wallenda, citing its policy of discouraging stunting and sensationalism of the falls. New York state approval already is in hand.

"Dreams do come true," Wallenda said, adding that he would like to make Niagara Falls his "second home," performing seasonally here with his family members.

Wallenda, the father of three, plans to visit schools on both sides of the border talking about fitness in his quest to remain an example of doing what's moral and what's right.

Whether his walk on the two-inch diameter wire starts on the Canadian or U.S. side will depend on the weather conditions, Wallenda said.

"As long as I focus on the other side, I will make it through," he said. "I encourage people to never give up, to focus on that goal."

While excited about achieving his dream and facing the mighty cataract, Wallenda isn't nervous. He won't be wearing a tether. Seven generations of the Great Wallendas have starred in the heights. Nik holds six world records and has done walks both longer and higher than will be done in Niagara Falls.

"Since the 1780s, our family has been doing this. It really is life to us. It's just what I do," he said, adding that at the very least a mishap would ruin his career.

He has his own rescue helicopter and even a diver. He also will be meeting with officials on both sides of the border on security, safety and other details.

There's also plenty of physical preparation. His father, Terry Troffer, who walked the wire himself for 39 years, said a meteorologist will be hired to study past history of conditions and wind currents at the falls. The cable itself is being custom made. They will be setting up the wire to practice at a closed airport in Pittsburgh, where winds will be simulated with huge fans and fire trucks will provide the spray and mist.

"The biggest objective is to practice for everything ... that, for the most part, eliminates that panic reaction if something should go wrong," his father said. That includes practicing how to get out of any bad situations.

Wallenda, now 33, was only about a year old when he first stepped on a practice wire, and by the time he was 2 he could walk the wire himself, his father said.

Wallenda has a five-year contract with the Discovery Channel, which is planning a series of shows on the tightrope artist, including the Niagara Falls walk.

He plans to take it slow on the estimated 30- to 35-minute walk.

Local officials were enthusiastic about the potential Wallenda's walk will bring to the area.

"This will put Niagara Falls in the international spotlight in a positive way," said State Sen. George Maziarz, who sponsored legislation in the Senate to allow the walk.

"When Nik crosses that gorge, it will put a new meaning to the words 'Wonder of the world,' " added Assembly sponsor Dennis Gabryszak.

Maziarz noted that the walk could have an estimated $120 million economic impact here.

Maziarz also pointed out that due to regulations, it will be at least 20 years before another similar event could occur. That specification was part of the Canadian commission's ruling in favor of Wallenda.

"This is history in the making," added Member of Provincial Parliament Kim Craitor of the Legislative Assembly of Ontario.

He noted that the walk would "capture the imagination of the entire world" at a time when the area is celebrating the 200th anniversary of the War of 1812.

Craitor joked that when Wallenda was half way through his walk, "there will be a customs officer there to check his passport."

State Assemblyman John Ceretto admitted that as he was waiting his turn at the microphone, he was practically bouncing in his seat with excitement over the potential spur the walk could have for this area's economy. Having grown up in Niagara Falls, he's seen both its best days and its worst, he said. "I have a dream, too. I see that some day our children will not have to leave this area for work."