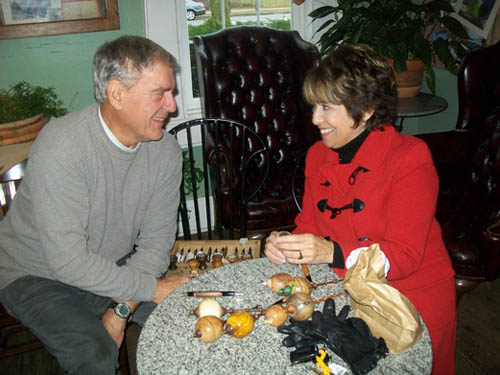 While many people this season will flock to big box stores to buy products imported from Korea, Lloyd Draper exported himself to that country in September. Alongside his wife, Romona, Draper learned how to make snow-cone-icicle-shaped ornaments. Since returning home to Lewiston, he has made about two-dozen designs, given many away as gifts, and saved several to display at the Orange Cat Coffee Company at 703 Center St.

Now, you're not likely to find such carefully crafted wooden Christmas ornaments at any old retail store. Draper crafts his designs from lilac, plum, black walnut and cherry trees, molds and shapes them with acrylic, and fills in any gaps with pieces of turquoise or silver state quarters.

"I try to make use of anything I have," he says. "(I) never know what the thing is going to look like once it's turned. ... The challenge is to take something that looks plain ... and to make something I guess would be considered a piece of art."

The wooden bulbs - the snow-cone tops - are fashioned from chiseled branch logs. They're shaped into a cylinder, hollowed out, sanded and finished with French polish. The 8-inch icicle stems start as a square piece of wood and are carved from the thinnest point up to the thickest part. They, too, are sanded, shaped and finished.

The process takes about two hours per ornament. Draper says the goal is "to make it the most interesting piece you can. I'm not really creative, but the wood, itself, lends to the creativity and beauty."

Draper's modesty notwithstanding, passersby couldn't help but to stop and offer praise for the ornaments as they sat on display during this interview. Orange Cat staff purchased at least three pieces. Jazz Festival contributor Carol Calato stopped and placed an order, as well.

"Sometimes people are looking for gifts that are handmade," Draper says.

His "rainy day" activity stems from a long love of woodworking.

The retired Niagara-Wheatfield math teacher crafted wood with his father. "We did work in our basement," Draper recalls.

When his father died unexpectedly with the Schoellkopf Power Station collapse in 1956, the then 16-year-old Draper realized, "that was all I had left of my dad."

"I wanted to learn something for my kids and grandkids so they'll have something to remember me by," he says.

His modern-day woodworking includes rocking chairs and toys for his four children and eight grandchildren, and bottle stoppers and pens (many of which are used in school fundraisers).

Draper has crafted wood from an abandoned Haitian refugee boat found in the Bahamas, parts of a maple tree he used as target practice almost five decades ago, and he used some of the discarded cedar from the former Piper Law Office to make Historic Association of Lewiston Executive Director Pam Hauth a bottle stopper.

He says he tries "to have the wood have some sort of story and meaning."

Draper volunteered his time and talent in the transformation of the Piper Law Office into the Lewiston Welcome Center.