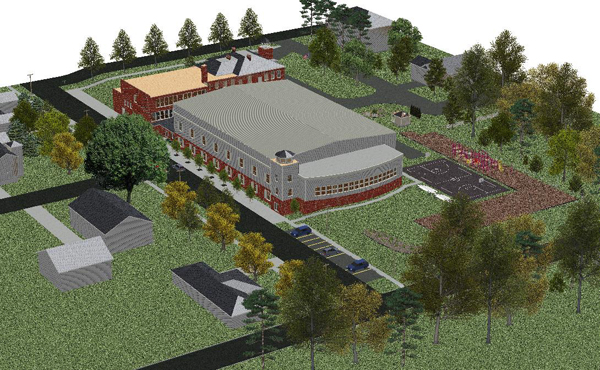 Gary Hall spoke to the Sentinel Friday about his intentions to build a new recreation center in the Village of Lewiston. The president and CEO of Waste Technology Services will speak to the Village Board Monday night about the $2 million development, which could be built behind the Red Brick Municipal Building on North Fourth Street.

"I'm pretty excited about it," he said. "I think it's going to be great for the community."

Hall was previously granted permission to build a $1 million recreation center on the WTS site at 435 N. Second St. When he thought about it, though, "I felt it was needed in this part of Western New York."

In other words, the longtime Niagara Falls Boys & Girls Club board member has "always wanted to" build such a project for the local community.

Hall's recreation center plan calls for three Astroturf tennis courts on the ground floor with a tucked-away weight room. On the second floor periphery, the building would offer a running track and game room. Hall envisions indoor tennis and soccer; youth programming; and possibly even volleyball and baseball. Sports professionals would be on site to offer lessons.

"Right now, it's kind of conceptual in nature," Hall said.

He is still working out the logistics of ownership and management with the Village of Lewiston. Hall said the recreation center would be not-for-profit.

"I don't really have any interest in owning it," Hall said. "I just want to make sure it's managed well."

"It's for the community; we're not looking to make money," he said, other than to cover building costs (such as electricity, water, etc).

"We don't want it to be a burden on taxpayers," Hall said.

To that end, Hall said the recreation center would have to charge some sort of usage fees.

"There's going to have to be a cost associated with it," he said, referencing similar indoor centers Sportsplex and Village Glen.

"It's going to have to be run like any other facility," he added.

Hall is a big tennis enthusiast - " I have a lot of passion for it," he noted - and said he'd look for U.S. Tennis Association grants. The USTA is trying to revive tennis domestically, and Hall said top tennis pros Novak Djokovic and Rafael Nadal got their start in youth tennis programs.

The recreation center's management team would exist "to make sure we get the most out of it."

Hall is aware some Red Brick neighbors are apprehensive about the 120-by-200-foot building going up in their vicinity. He's spoken with some residents and said, "I really don't want to do anything that folks don't want in their backyard."