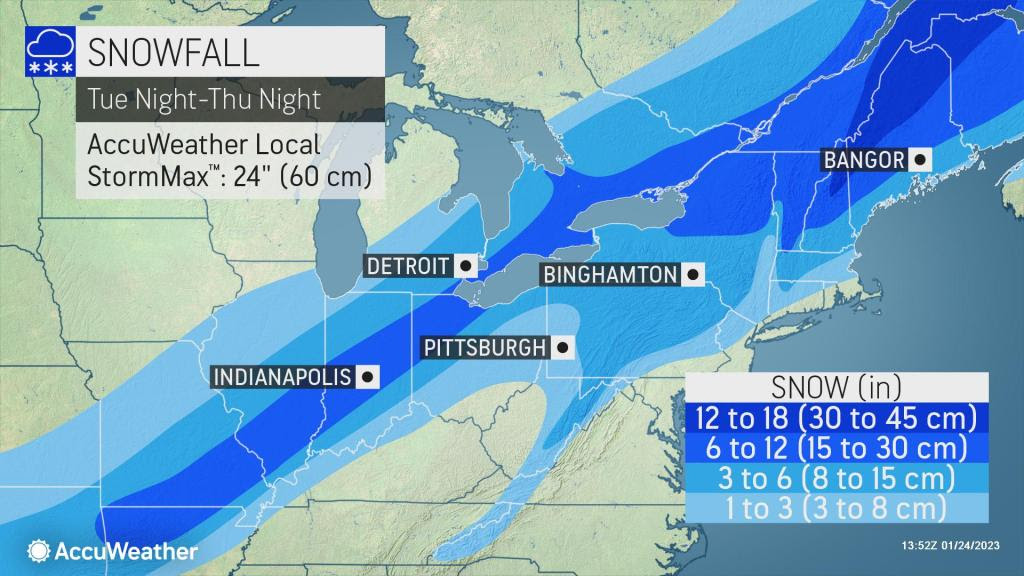 AccuWeather meteorologists warn that a combination of heavy snow poorly timed with the morning or evening commute in many metropolitan areas can snarl traffic, lead to dangerous travel conditions and even highway chaos – with the risk for some roads and highways to be nearly impassable, at least a time if numerous vehicle crashes occur. Meanwhile, the same storm will bring a significant risk for severe thunderstorms and localized tornadoes from Southeastern Texas to the central Gulf Coast, including the Houston and New Orleans metropolitan areas.

This is a potent storm intensifying quickly, and the rate of snow will be notable in the heaviest bands – in some places, the snow may fall at 1-2 inches per hour. When it is snowing that fast, despite the best efforts of road crews, it is hard to keep up with the accumulation and keep roads clear of snow.

It has been unusually mild in recent weeks along much of the winter storm’s path, so it may take more time than normal for snow to begin accumulating on the roads but, once it does, it may do so quickly – almost like a light switch flipping with rapidly deteriorating travel conditions. We've seen similar situations in the past catch people off guard who aren't prepared for the impacts and cause highway chaos. Further, early snow melt and then quick snow accumulation could lead to an icy layer on untreated areas, increasing the risk of crashes.

Further south, there is a risk of severe weather Tuesday into Tuesday night stretching from southeastern Texas to the central Gulf Coast. Within this risk area, AccuWeather has issued a high risk for severe weather centered near and south of Interstate 10 in southeastern Texas and far southwestern Louisiana. The severe threats from these storms will include tornadoes, damaging wind gusts between 55-65 mph and hail. There is an AccuWeather Local StormMax of 80 mph through Tuesday night.