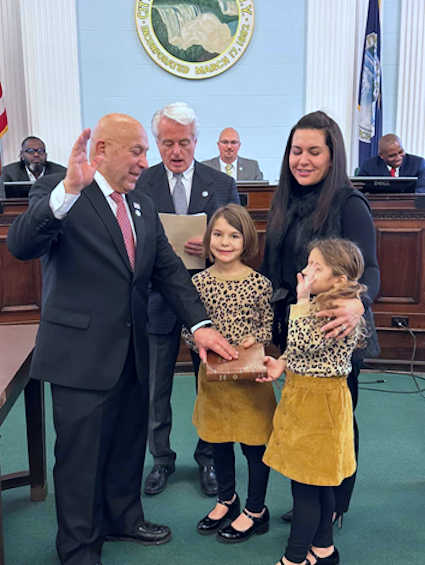 Pictured: Assemblyman Morinello; his daughter, Melissa; granddaughters Giuliana and Raffaella; and City of Niagara Falls Mayor Restaino. Morinello was sworn into office at a ceremony on Monday.

Assemblyman Angelo Morinello, R-C-I-Niagara, was joined by his daughter and granddaughters as he was sworn in Monday by Niagara Falls Mayor Robert Restaino to serve his fourth term in the Assembly.

“I am very grateful to once again be elected to represent parts of Niagara and Erie counties in the Assembly,” Morinello said. “This session, I will be focused on lowering the cost of living for every resident in this state, along with rolling back dangerous bail reform laws that are releasing criminals back into our communities without any repercussions. I will also be focusing on rooting out corruption at all levels of our state government. Our constituents deserve transparency from state leaders. I look forward to getting back to Albany to work on real issues that matter to all New Yorkers.”

Morinello represents the 145th Assembly District in parts of Niagara and Erie counties.

His team said, “His tour in Vietnam as a combat soldier, along with his education, work experience as a lawyer and a judge, and his community service as a resident, enables him to truly understand what it takes to continue representing Niagara and Erie counties areas in the Assembly.”