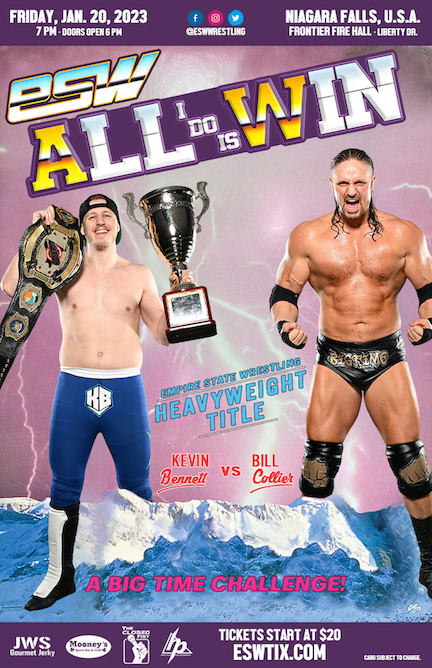 "All I Do Is Win" poster courtesy of ESW.

Empire State Wrestling starts 2023 in a major way with its next event, “All I Do Is Win.” The event will take place Friday, Jan. 20, at the Frontier Fire Hall (2176 Liberty Drive, Niagara Falls).

Organizers said, “ ‘All I Do Is Win’ will feature several U.S. independent wrestling stars as well as many of the best wrestlers from the Buffalo-Niagara Region.”

The scheduled card for consists of the following:

√ ESW heavyweight champion and 2022 Ilio DiPaolo Memorial Cup winner "The Remix" Kevin Bennett will defend the title against "Big Time" Bill Collier. This will be their first match-up with a championship on the line

√ In tag team action, CXR will square off against Beyond Wrestling's The Miracle Generation

Front-row tickets are sold out. A limited amount of second-row tickets are available for $25. General Admission tickets are $20. Tickets can be purchased at ESWTIX.com. Ticket prices increase by $5 on event day.