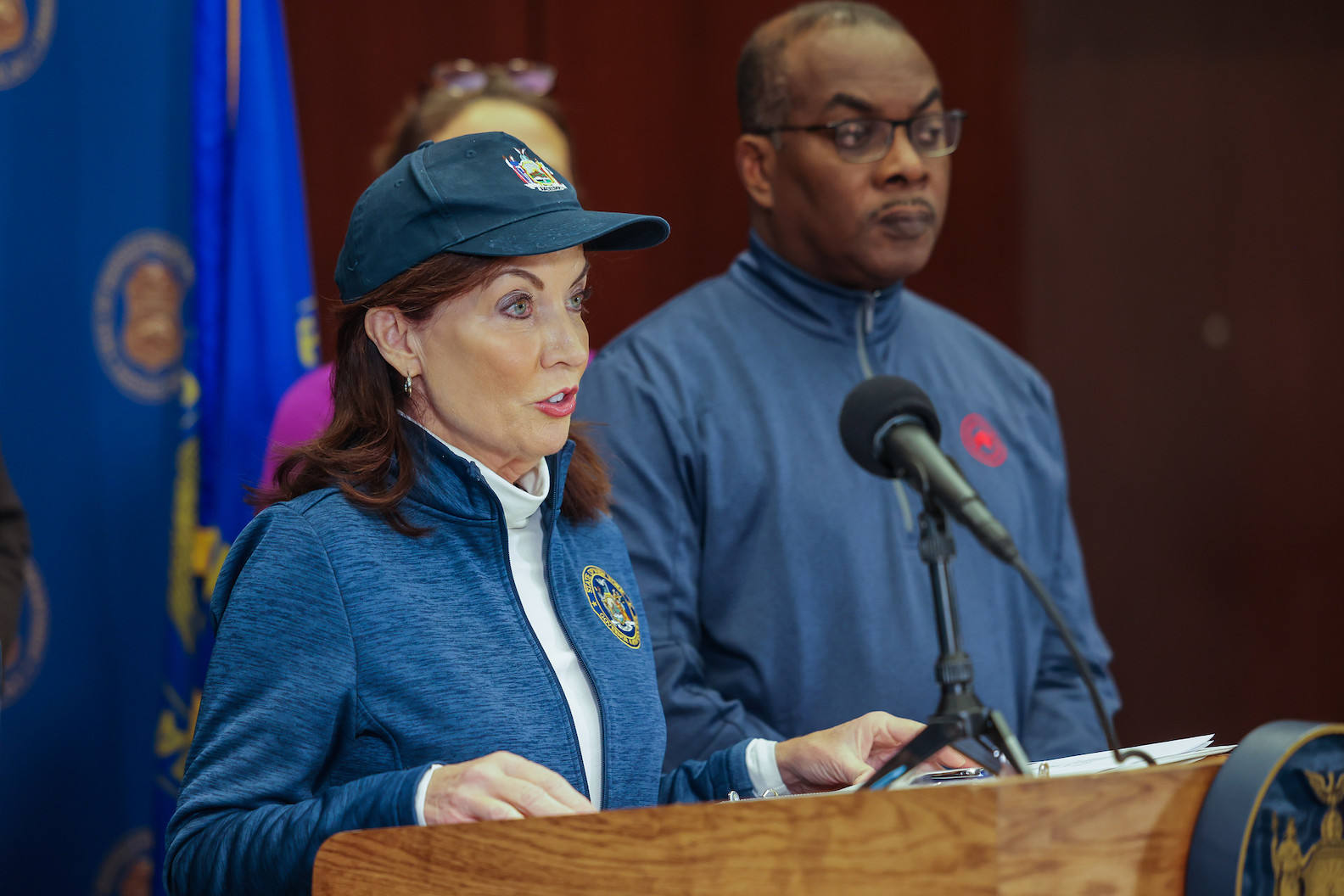 Gov. Kathy Hochul addressed the media Monday afternoon, providing an update on state efforts to assist Western New York with the aftermath of the weekend blizzard. She said, in part:

“We have been through a lot of wars together, and this blizzard is the one for the ages. Certainly, it is the blizzard of the century. And we are here to talk about our collaborative approach to dealing with this crisis, and it is a crisis. …

“We spent Christmas in Downtown Buffalo in a hotel yesterday, and I appreciate everyone, all the first responders, and the National Guard who are here. All the local police and fire professionals for sacrificing the time away from their families so we can keep your families safe. …

“I did have a chance to go out around the city this morning and survey some of the sites and mostly to thank people. I was at the Buffalo Police garage talking to the team of police department officials and their SWAT team, as well as our State Police, and talk about how they have been out there, talking to them personally about their experiences going into homes, going into vehicles, and in too many tragic times of finding people who did not survive the experience.

“And I want them to know that we know that is difficult work to do. And they're grieving inside as we all are for the families who are getting the horrible, heartbreaking news that their loved ones succumbed to the storm over the last day or two.

“And our hearts are breaking for them, and we'll be there to support their families and get them through this. But also, the people who are the ones who find their loved ones, it does take a toll. And I wanted these people, as tough as they know they are, to know that we need to make sure that they can the circumstances they're in because none of them ever thought that this is what they'd be doing on their Christmas holiday either. …

“I also had a chance to see some of our snowplowing operations on Route 33. The DOT, extraordinary what they've been doing, and it was very important to keep Route 33 open, because that is a gateway to one of our major hospitals, ECMC.

“So, we had to make sure that the doctors and nurses and professionals could get to their jobs, as well as clearing a path for ambulances and other emergency vehicles to get to the hospitals, as well. …

“Also stop by the Masten Avenue Armory to talk to the men and women of the National Guard who've come in from all over the state have been deployed there. Over 400 strong, more on the way, and we're going to continue having them involved in our missions: search and rescue plowing, traffic enforcement, bringing food and water to our warming shelters and to our first responders, as well as medical transport to get people where they need to go.

“And in fact, in one such case, we had a situation where the head of surgery at ECMC was trapped in a vehicle with his elderly mother, and they're running out of fuel, and they're rescued by our state fire teams, as well, who have been doing an extraordinary job. I don't think a lot of people talk about the state fire teams, but they have been everywhere, really the backbone of this operation for us.

“So, that is what I just witnessed on the ground this morning. I'm in downtown Buffalo, I will continue to be here and, as much as we can see the skies right now, we know that the storm is coming back. We're expecting another 6 to 12 inches. And in the south towns, the southern part of Erie County, little bit south of here, they had 30 to 40 inches of snow overnight.

“So, anyone who declares victory and says it's over, it is way too early to say this is at its completion. Maybe the severity is downplayed now, and right now, it's not as bad as it had been over the last couple days, but it is still a dangerous situation to be in. And that is why the driving bans … that we have here at the state level, the New York State Thruway Authority closed from the Pennsylvania border all the way to Henrietta near Rochester. That is because we still have scores and scores of vehicles that were abandoned when people left during the storm, were just in a ditch, they can't possibly get out. We have had snowplows, major snowplows and rescue vehicles, I saw them myself in ditches, buried in snow. So, those circumstances are still difficult. We need to have the roads open to continue plowing and salting and removing all those vehicles, so the thruway will remain closed until further notice.

“We're assessing right now what the conditions will be over the next few hours and decide when we can get it open safely. Also closed are the Routes 190, the Route 400, 219 and Route 5. Those are the main arterials that the state is responsible for.

“Back to the search and rescue, our teams alone, the county and the city, have their own stories. We had over 550 rescues transporting people all over, people from out of town who had no idea what they're in for. It's extraordinary. The people in Williamsville, in a Christmas Eve rescue with the plow team, a family of six was rescued. It was a very frightening experience for all of them, and I'm so grateful that we had our plow drivers literally involved in the rescue, as well. And that goes to the testament of the hardworking state workers and local officials and partners we had working as well.

“So, the National Guard is on the ground, we have the weather forecast not that great, but it's improving.

“And I also want to mention what's going on in Watertown, another site in the state that we're responsible for assisting with and in constant communication with their leadership team, the county and the mayor of Watertown. They're continuing to get more snow. Another 3 inches per hour is coming down, and some of the roads in that area are closed.

“So, I just want to say a couple of things. This has been a joint effort, and I want the people of Western New York to know, who are frustrated, that we are working so hard, and the people around us are working so hard and I'm grateful for all of them. But if you're that mom at home with kids who've been out of power for a long time, that was me not that many years ago. I know the experience. It is frightening. It is exasperating and you're just saying, ‘When is this going to end?’ I understand that pain and that frustration intensely. And we'll be getting through this together very soon. I feel confident of that, but the most important thing is please stay at home for the next day.

“Luckily, the kids are off school, otherwise, we would've been having to deal with the loss of learning, and also making sure that since today is a holiday and over the weekend was a holiday, it is a big travel weekend. But hopefully, those of you who aborted your plans to travel out of state will continue to be safe and stay off the road so we can continue to rescue people, get them safe and make sure that the roads are clear, so we can reopen our community as soon as humanly possible. That is our desire here today.”