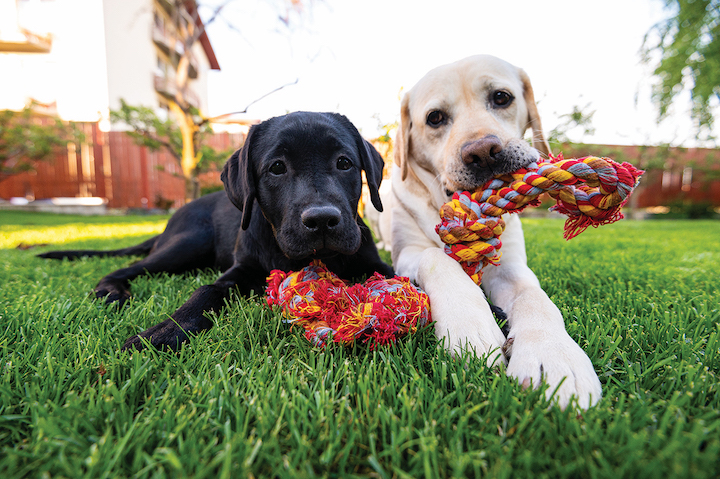 The Humane Society of the United States and the American Kennel Club offer these suggestions to help dogs get along from the moment they meet. (Metro Creative Graphics)

Tips to introduce a new dog to your other dog

The value dogs bring to a home is undeniable. Dog owners and their families may welcome a new dog with open arms, because they recognize these pets provide unconditional love and can make their human companions smile no matter what else is going on in their lives. However, other dogs may be considerably less enthusiastic about rolling out the proverbial welcome mat to another furry member of the family.

In recognition of the potential difficulties of welcoming a new dog into a home where a dog already lives, the Humane Society of the United States and the American Kennel Club offer these suggestions to help dogs get along from the moment they meet.

•Make introductions on neutral territory. The HSUS recommends familiarizing dogs with one another outdoors. Outdoors is neutral territory, so a dog that’s already well-established in a home is less likely to feel threatened here than if it meets its new housemate indoors in an area it already thinks is its own. The HSUS recommends walking dogs separately on a leash during this introduction, ideally at a distance where they can see each other but are not provoked by the other’s presence. Carry treats and reward the dogs for seeing each other.

•Keep a watchful eye on body language. The HSUS notes that hair standing up on a dog’s back, teeth baring, growling, a stiff-legged gait, or a prolonged stare indicate a defensive or wary response from a dog. The sight of these postures merits an immediate interruption to the interaction. If dogs respond in a more relaxed and comfortable way during the introduction, the distance between them can be reduced, though owners should still be mindful of their body language.

•Separate the dogs during initial inside introductions. The HSUS recommends using a sturdy and tall baby gate to separate dogs when introducing them inside. Watch how they interact with this barrier in place and reinforce positive interactions with treats.

Introducing a new dog to a home where a dog already lives can be challenging. But various strategies can help such interactions go smoothly.