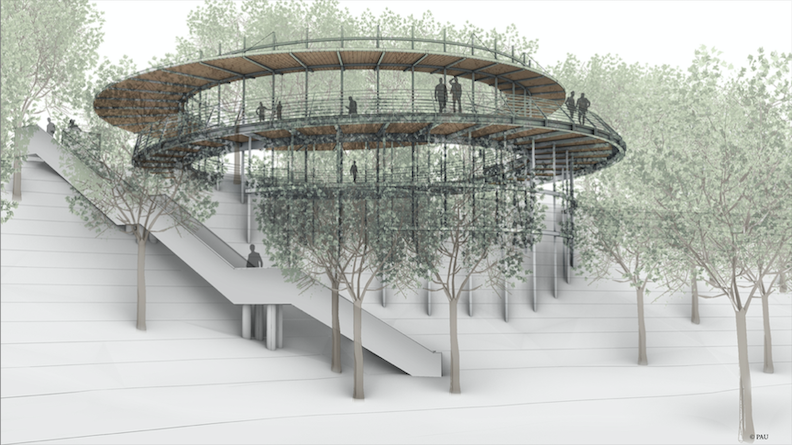 √ Hochul: Both projects will help reconnect people of Niagara Falls to waterways that define the city's identity

Gov. Kathy Hochul on Thursday announced two “transformative” projects in Niagara Falls that, her team said, will attract new residents, visitors and development to the downtown and help reconnect the people of Niagara Falls to the waterways that define the city's identity.

Hochul said, "We are forging a new path forward for Niagara Falls – making targeted investments that will help draw tourists and transform the community. The Niagara Heritage Gateway Project and Great Lakes 360 will bring exciting new developments to the city's downtown, attracting new visitors, stimulating the local economy and making the community an even better place to live."

The scope of the Gateways Project will include:

√ Reinterpreting a stretch of the historic Niagara Falls Power Company's hydraulic canal as an engaging public plaza that illustrates the history of large-scale electricity production and its effects on the American society in its design.

√ Constructing an observation deck along the border of Niagara Falls State Park, accessible from Buffalo Avenue and linked via stairway to the park itself, with panoramic views of the American Rapids and Goat Island. The design will preserve existing tree coverage and provide opportunities for outdoor seating.

√ Transforming DiFranco Park into a multiuse pavilion for outdoor performances, recreation and public gathering spaces, in partnership with the City of Niagara Falls.

√ Creating a pocket park at the corner of Buffalo Avenue and 1st Street that will provide respite and activate the streetscape.

√ Establishing an interpretive park at the Cataract House Hotel historic site to tell the story of the Underground Railroad and how African American hotel staff played a prominent role in helping freedom seekers escape to Canada.

Hochul’s team said that, throughout 2020 and 2021, the USA Niagara Development Corp. – an Empire State Development subsidiary – and PAU devised a strategy for the redevelopment of several vacant or underutilized properties in Niagara Falls. These sites had been acquired in 2018 as part of a “strategic land-acquisition” program funded through New York state.

“The ‘Downtown Niagara Falls Development Strategy’ illustrates a range of interim interventions and attainable development guidelines to reimagine a vibrant downtown in the near-term while building momentum and continuing to promote sustainable dynamic growth and development over time.”

The Niagara Falls Heritage Gateways project stems from this strategy and includes several of the interim interventions recommended to activate parcels ahead of private-sector development. 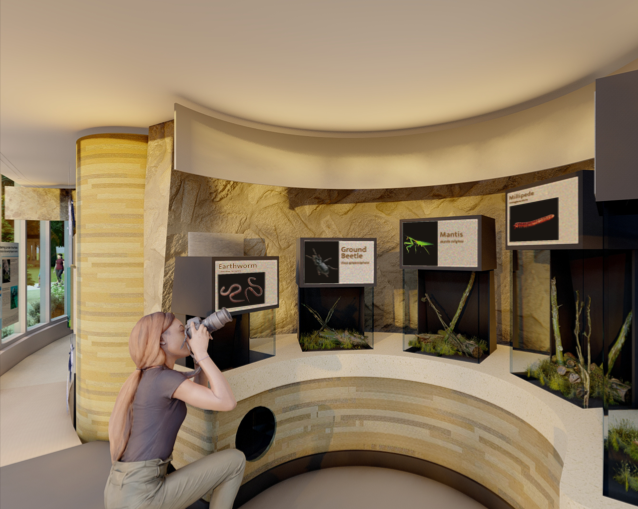 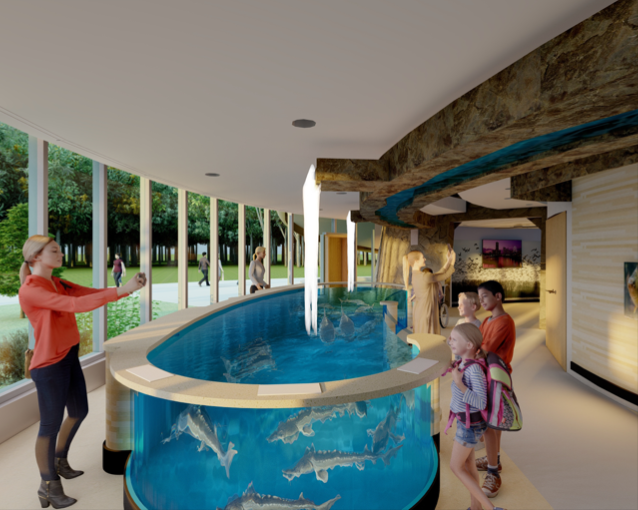 Hochul’s team said, “The $5 million Great Lakes 360 project will be a living museum that highlights the notable wildlife of the Niagara River and the larger Great Lakes ecosystem while celebrating the area's unique geological history. The project's focus on accessible exhibit design will transform the building into a one-stop destination where visitors of all ages and abilities can experience the ecological story of the region all year round. The completed project will increase the number of living exhibits at the Aquarium by 40%.” See renderings here.

The Niagara Gorge Discovery Center, also known as the Schoellkopf Geological Museum, is positioned at the precipice of the Niagara Gorge and situated just 500 feet southwest of the Aquarium of Niagara's main building. Under the agreement with New York State Parks, the Aquarium of Niagara will renovate the vacant building, creating new space for Great Lakes-focused exhibits aptly situated along the new green space created through the recently completed removal of the former Robert Moses Parkway.

This partnership between State Parks and the Aquarium of Niagara expands the venue’s geographic footprint and opens the opportunity for the Aquarium to develop a campus-like presence in downtown Niagara Falls. Hochul’s team said, “The opening of a new indoor, year-round attraction in this location also creates critical mass in a developing area of the Niagara Falls State Park.”

The Niagara Gorge Discovery Center opened in 1971 under management of New York State Parks. Located at the site of one of the first hydroelectric power plants in the U.S., the seasonal attraction showcased the natural history of the Falls and the Niagara Gorge. It has been closed to the public since October 2020.

This new partnership between State Parks and the Aquarium of Niagara “will breathe new life into the space in a way that celebrates the natural history of its location, and motivates more than 200,000 annual visitors to protect the region's rich resources for generations to come.” 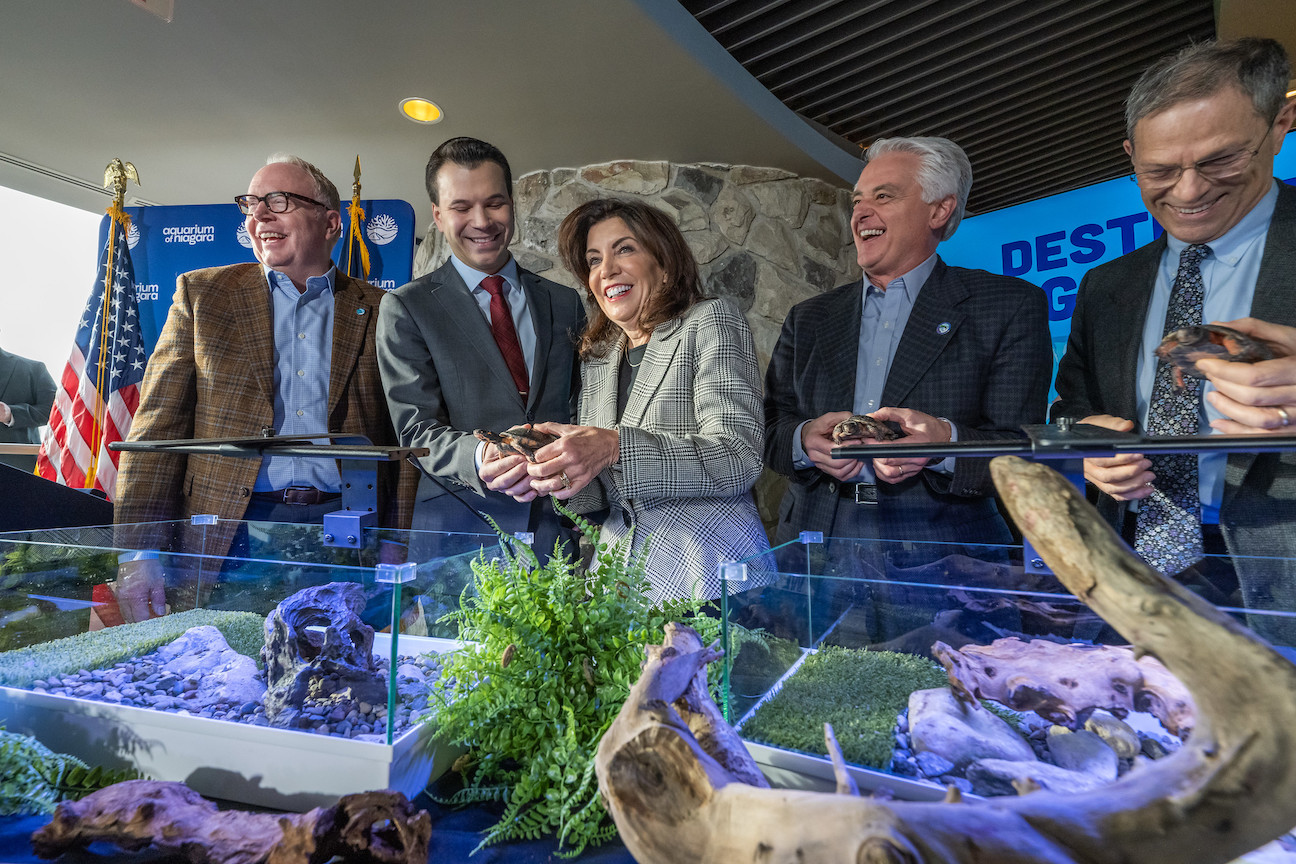 Empire State Development President, CEO and Commissioner Hope Knight said, "The Niagara Falls Heritage Gateways project is a first step in New York state's strategy for bringing long-dormant sites, now controlled by the state, back to productive use. This will both increase the city's tax base and contribute to a reemerging vibrant downtown that is a draw for visitors and residents."

New York State Parks Commissioner Erik Kulleseid said, "State Parks is proud to partner with the Aquarium of Niagara to repurpose this unique facility. It is perfectly suited to tell the story of the Great Lakes and will complement the main facility while providing another option for year-round recreation in Niagara Falls."

Assemblyman Angelo Morinello said, "Thank you Gov. Hochul for continuing projects focused on Niagara Falls continuing its journey as a world-class tourist destination. Our city and region are focused on green attractions combining our natural wonder, the falls, with ecotourism attractions that highlight nature's wonders that surround us."

City of Niagara Falls Mayor Robert Restaino said, "Niagara Falls continues to captivate visitors and locals with its power and beauty. The creation of the Heritage Gateways will provide more opportunity for enjoyment of our natural wonder and bring additional venues for entertainment to downtown to join the exciting expansion of our Aquarium of Niagara. The commitment of Gov. Hochul to lifting our community to advance new development is an exciting opportunity for our city, and we appreciate her continued support."

PAU founder and Creative Director Vishaan Chakrabarti said, "We're thrilled to continue our work with New York state in Niagara Falls with an expanded team including landscape architects Hargreaves Jones. The Niagara Falls Heritage Gateways project is a chance to demonstrate how thoughtful design can restore rather than remake our cities in collaboration with the local community. Public infrastructure is at the center of successful urbanism – we applaud New York state for championing public spaces and architecture that connect us to our narratives, to our environment, and to one another."

Aquarium of Niagara President and CEO Gary Siddall said, "Our vision for the space includes a truly inclusive experience with opportunities for both indoor and outdoor adventures that are accessible to all visitors. Through living habitats and educational programming, guests will experience authentic interactions with animals that inspire them to make a difference for aquatic life. This partnership truly builds upon the Aquarium's strategic goals to enhance the guest experience, situate the Aquarium as a regional asset, and grow our role in aquatic conservation."

About the Aquarium of Niagara

The Aquarium of Niagara is a 501(c)3 nonprofit organization that is home to more than 120 different species, including 10 rescued and non-releasable marine mammals. The venue is open daily at 9 a.m. year around, except for Christmas and Thanksgiving. For more information, visit aquariumofniagara.org.

Empire State Development is New York's chief economic development agency. The mission of ESD is to promote a vigorous and growing economy, encourage the creation of new job and economic opportunities, increase revenues to the state and its municipalities, and achieve stable and diversified local economies. Visit www.regionalcouncils.ny.gov and www.esd.ny.gov.

The New York State Office of Parks, Recreation and Historic Preservation oversees more than 250 parks, historic sites, recreational trails, golf courses and boat launches, which, in 2021, were visited by record 78.4 million people. For more information on any of these recreation areas, visit www.parks.ny.gov.