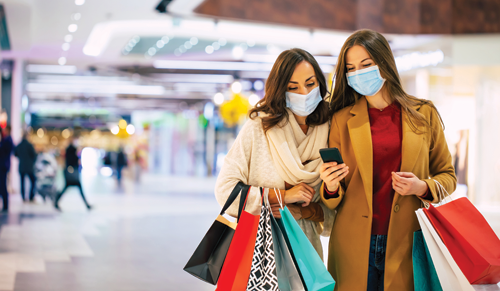 COVID-19 and the holidays: UB experts weigh in on how to stay safe

As the holiday season kicks into high gear, University at Buffalo physicians and scientists have recommendations for how people can stay safe and healthy this holiday season amid some increasingly concerning signs.

Thomas Russo, M.D., SUNY Distinguished Professor and chief of the division of infectious disease in the Jacobs School of Medicine and Biomedical Sciences at UB, notes that this fall’s unusually high incidence of respiratory syncytial virus (RSV) and flu infections among both children and adults has had an impact.

“It’s been a tough fall for respiratory viruses,” he says. “We had a big RSV wave affecting children and older adults, and now we’re seeing a huge flu wave affecting children and adults. This is largely due to the fact that the measures we took to minimize COVID-19 for the two prior fall/winter seasons also minimized the prevalence of flu and RSV infections. That expanded the population that never saw these viruses, such as young children; it also resulted in immunity in the adult population waning over time. That made the viral susceptibility pool larger than usual, causing more infections and causing those who are more at risk to land in the hospital.”

While there is much to learn about how viruses interact, the other viruses have probably contributed to the lower incidence of COVID-19 so far this fall.

“But COVID-19 is still smoldering here, it has not gone away,” he says.

‘No Question We Will See a Bump’

“I think there’s no question that we will see a bump in COVID-19 infections,” Russo says. “They will result in some cases in more severe disease, hospitalizations and bad outcomes. The magnitude remains unclear. But I’m concerned, since only a third of senior citizens nationwide have received the most recent boosters.”

Those boosters, which became available early in the fall, decrease the likelihood of infection, decreasing transmission as well as severe disease, hospitalization and bad outcomes.

“Immunity against the SARS-CoV2 virus is not only about the antibody response, it’s also about the immune system’s T-cell response, which the boosters enhance,” he says.

“Early Centers for Disease Control and Prevention surveillance data show that people vaccinated with the updated bivalent booster have lower rates of dying from COVID-19 compared to people vaccinated but who had not received an updated booster dose,” said Gale Burstein, M.D., Erie County commissioner of health and clinical professor of pediatrics in the Jacobs School. “Though the majority of adults in Erie County have some level of protection against COVID-19 from a primary vaccine series or previous infection, that protection consistently wanes over time. We continue to encourage completion of the primary COVID-19 vaccine series and a new bivalent booster dose for all eligible ages.”

The Food and Drug Administration authorized the updated COVID-19 boosters for children 6 months and older earlier this month, extending protection to an even broader swath of the population.

Protection from vaccines is particularly important in light of the recent detection in Western New York of the more transmissible omicron variants. According to Jennifer Surtees, Ph.D., an associate professor of biochemistry in the Jacobs School who leads the sequencing effort, both BQ1 and BQ1.1 made up about 20% of the sequences from the first half of November. Those numbers are likely higher now since these two are currently the dominant variants in the U.S. She said that a significant number of BF.7 cases also have been detected in Western New York and are spreading quickly.

The sequencing effort led by Surtees is in the genomics and bioinformatics core in UB's New York State Center of Excellence in Bioinformatics and Life Sciences, one of five labs chosen statewide in 2021 as part of a $20 million sequencing partnership between the state Department of Health’s Wadsworth Center and external laboratories.

From a scientific perspective, Surtees said it is fascinating that omicron is the variant that has persisted for about a year now.

“We’ve not had any other variants for that long,” she says. “It’s a remarkable amount of evolution within omicron that has made it dominant. There is a tremendous amount of genetic diversity within the omicron variant.”

Unfortunately, she adds, it’s that diversity that has such negative impacts for public health.

“The BQ variants are very immune-evasive and don’t respond to monoclonal antibody treatment,” says Surtees, adding that Evusheld, the monoclonal antibody that has protected immune compromised people from earlier variants, is also not effective against these new variants. However, antiviral medications, such as Paxlovid, are still effective.

“We have fewer therapeutic options now,” Surtees says, “so the best thing to do is to try to avoid getting infected. People who haven’t gotten their boosters should get them now. There is good evidence that they do protect against severe disease. And if your holiday plans include seeing vulnerable people, such as older or immune compromised people, wear a mask for a week before you see them. Be thoughtful about whom you are interacting with and test before you gather with others.”

‘Upward Trend is of Concern’

With so many people doing home testing, it’s harder now to get a true picture of the prevalence of COVID-19 infections in Western New York.

Peter Winkelstein, M.D., executive director of UB’s Institute for Healthcare Informatics, said that whereas a few weeks ago the number of positive PCR tests being reported to the state in Western New York was about 100 per day, it is now around 200 per day.

“That’s still less than the 300 per day we had in September and October,” he notes, “but since it doesn’t include at-home testing, it is hard to tie ‘cases’ to the prevalence in the community. The upward trend is of concern, however.”

He adds that, as of last week, the number of patients in Erie County hospitals who have tested positive for COVID-19 has been holding steady at about 120.

“This is much more than we had over the summer, but not anywhere near the big spikes we have seen,” he says. “Thankfully, we did not get a big rise at the beginning of November, which is when we got hit in the past two years.”

Winkelstein, Surtees and Russo agree: The best advice is to get the booster if you haven’t, strongly consider wearing a mask indoors and, if you have symptoms, get tested and stay home – even if your test is negative.

“If you do test positive for COVID-19, most people should take Paxlovid and start treatment as soon as possible, the same with Tamiflu if you get the flu,” advises Russo. “If you’re gathering for the holidays, it’s also a good idea to go back to the strategy of everyone taking an at-home test beforehand, especially if someone who is vulnerable will be joining the festivities.”

“We have the tools to minimize the risk of influenza and COVID and its consequences, but,” he cautions, “people are underutilizing them: Get your boosters; mask up in busy, indoor settings; test as soon as you have symptoms; and, if you do test positive, contact your health care provider to discuss treatment options.

“We’ve got the players, let’s put them in the game!”