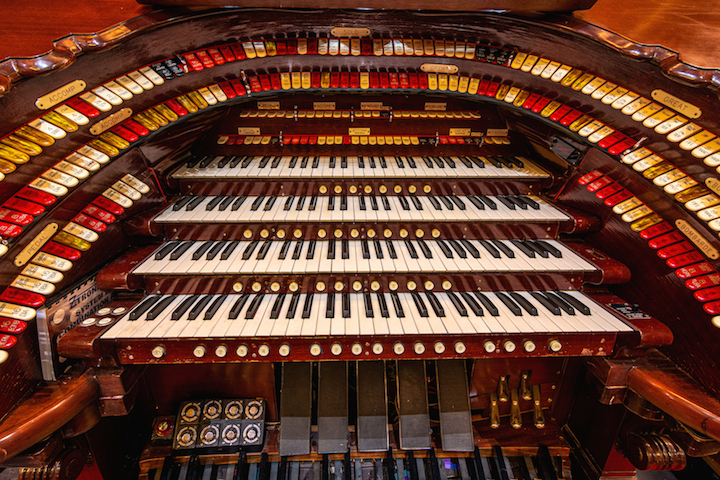 A photo of the Mighty Wurlitzer by Tom Burns Photography/courtesy of Shea's.

The landmark Mighty Wurlitzer organ at Shea’s Buffalo Theater is moving smoothly toward completing its $386,500 restoration in time for the historic center’s 100th anniversary in January 2026.

The organ, renowned as one of the top two or three Wurlitzers in North America, is in the third of seven phases of rebuilding that started in 2020. Thirty-seven years passed since the last restoration work.

The remainder of the funding for the work remains to be raised. Through the third phase, $160,550 in work will have been completed.

“Shea’s Wurlitzer organ is a global asset and a unique part of our city that needs to be recognized,” Shea’s Director of Operations Robert Brunschmid said. “It’s a legacy of Buffalo’s golden age, but its excellence remains evident today.”

Prior to each performance of “Come From Away” at Shea’s Buffalo from Dec. 13-18, there will be a 20-minute, preshow concert of the Mighty Wurlitzer for patrons to enjoy.

The organ, built by the Rudolph Wurlitzer Co. of North Tonawanda, was installed in December 1925 for $72,500, or about $1.15 million today. Virtually every instrument in a symphony orchestra is represented when the full organ is played. An interesting aspect of this is that Wurlitzer produced 2,143 pipe organs between 1910 and 1943, and Shea’s’ is one of only 12 worldwide that remain today in the same building in which they were originally installed.

Situated to the right of the main stage, it has four keyboards and 28 rows of pipes. The smallest pipe is no bigger than a pencil, while the largest is 32 feet long and an adult could sit inside it. From 1948, it sat idle for 30 years sustaining damage in a leaking room, and had mushrooms growing in the chambers.

“The Friends of the Buffalo Theater” formed in the mid-1970s to save Shea’s from the wrecking ball. Restoration of the instrument began in 1977 and, after superhuman efforts, the organ was rededicated in 1984.

After a concert given as part of the American Theatre Organ Society annual conference at Shea’s in July 2019, Ken Double of ATOS said: “I cannot emphasize to you in any stronger terms the ‘gold standard’ of theatre pipe organ that sits in those chambers at Shea’s Buffalo.

“It is not simple hyperbole, but fact. If one were ranking or awarding top honors for the finest sounding theatre organ in the world, Shea’s Buffalo could be arguably No. 1, and most certainly top three.”

The work currently underway focuses on rebuilding pneumatics, pipe stoppers, cleaning the pipe work, restoring wiring and other operational functions. It is being conducted in phases by David Peckham, of L.A. Peckham & Son Pipe Organ Service in Horseheads.

The Shea’s Buffalo Theatre was originally built as a “picture palace” by Michael Shea in 1925. Today, the Shea’s Performing Arts Center is comprised of three modern theaters in the heart of the Buffalo Theatre District, bringing the best of live performance through touring productions and local collaborations to Western New York. The Shea’s Buffalo Theatre is the historic crown jewel of the performing arts center and is one of the top touring theaters in the country with over 3,000 seats. It was designated a National Historic Site in 1975. Shea’s 710 Theatre is the latest space to be added to the campus. Once home to Studio Arena, this 625-seat thrust theater offers Broadway productions and plays produced by local and international companies. Shea’s Smith Theatre is a 200-seat black box theater and plays host to Off-Broadway productions, comedy and collaborative productions with local companies. Shea’s Performing Arts Center is committed to keeping true to the history of Shea’s Buffalo Theatre and to the future of the Western New York region, bringing the best of Broadway and beyond to Buffalo.