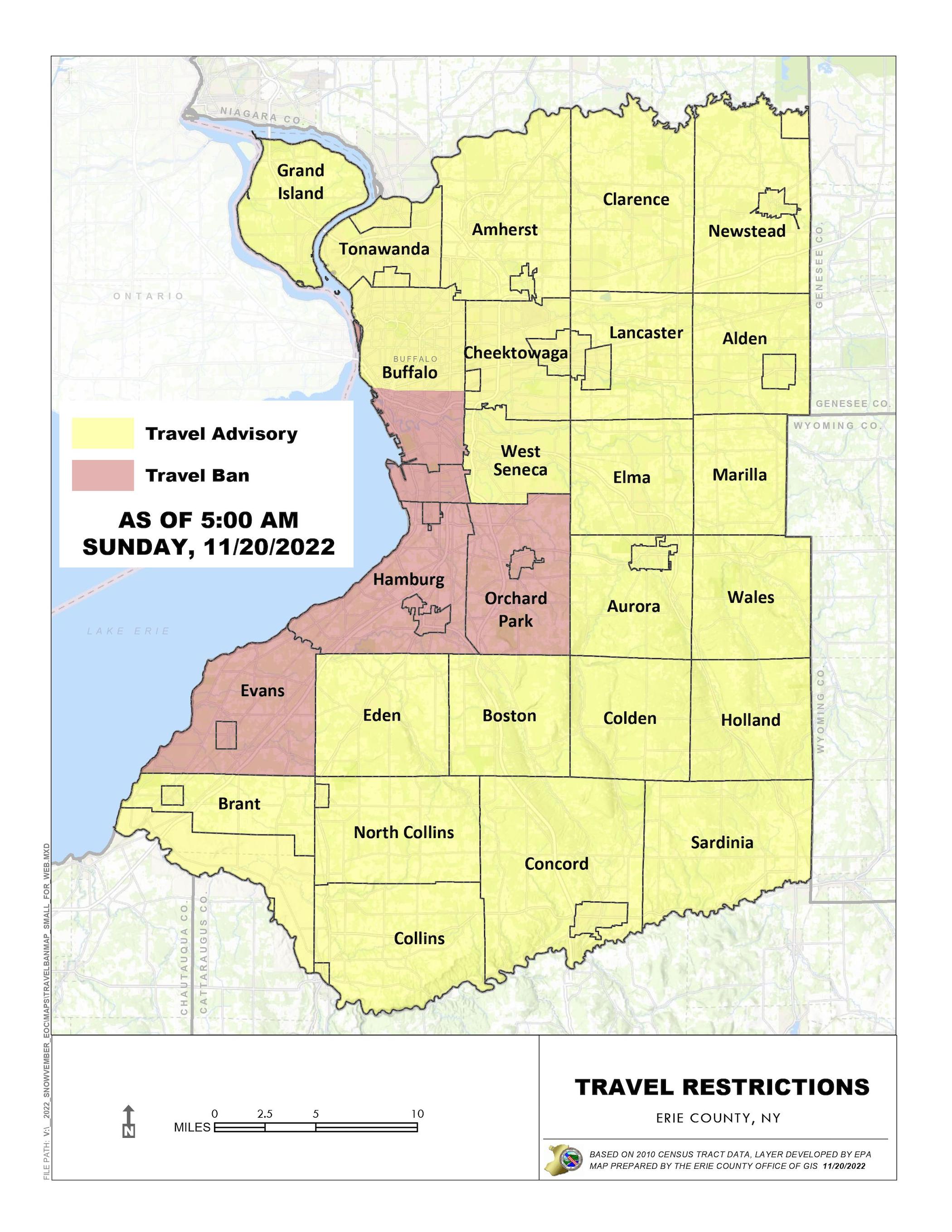 •“Due to the continued cleanup from the snow storm, @ErieCountyNY offices will be closed tomorrow. Essential employees are to report as directed. All others should follow the county's ‘Work from Home’ protocol.”

•“All vehicles towed by @ErieCountyNY during the course of the storm have been taken to the former Sears Store parking lot at the McKinley Mall and may be retrieved once travel bans are lifted. An inventory of towed vehicles can be found at: http://erie.gov/towedvehicles”

“As a reminder, the Erie County Department of Public Works is responsible for 1,200 miles of roadways across the county, none of which are in the Cities of Buffalo and Tonawanda.

“The county has also assisted the city in its requests for additional resources through our Disaster Lan System. An example of that is our request for and coordination of tow truck operators late last night to assist the city in removing abandoned vehicles.

“This was a historic storm: More snow fell in a 24 hour period than EVER before in the history of New York State, shattering a record set decades ago in the Adirondack region.

It will take time to get to every road and neighborhood open, but we are making very good progress in cleaning up after this storm. As an example of that, Travel Bans were lifted by the county as of midnight last night in the Towns of Alden, Aurora, Boston, Cheektowaga, Eden, Elma, Lancaster Marilla, West Seneca, and Wales.

We ask for your continued patience following a record setting storm of this magnitude. Thank you.”

•“Here are the current travel restrictions as of 5am this morning. You can always get up to date travel information and more at http://erie.gov while our response to this storm continues.”

•“Positive story: if you have been following there was great concern about the animals at the 10 Lives Club in Blasdell. DPW was able to get there and clear access to the building for the animals to be taken care of.”

•“We need to get through clearing the snow today and tomorrow and expect to get most areas back to normal in that time. Erie County will also be consulting with school district about school tomorrow later today.”

•“Abandoned vehicles that were removed by Erie County within the southtowns are located at the McKinley Mall’s former Sears parking lot. Can find an inventory online of this site at http://erie.gov/towedvehicles”

•“Update on abandoned cars: cars removed from Buffalo will be placed at the Out Harbor State Park parking lot between Gallagher Pier and Small Boat Harbor.”

•“We put out a call during the night to tow drivers to help with removing vehicles to continue clearing efforts. We are expecting to work with almost a dozen companies to help this effort in addition to current county contracts. Thanks to all who contacted us!”

“Please take note, these updated travel bans and advisories go into effect at midnight! They are not in effect as of this update briefing.”

“These updated travel bans go into effect at midnight because we would like to allow the bulk of this next wave of snowfall to pass through Erie County first.”

“Commissioner Bill Geary of @ErieCountyDPW is confident the majority of County routes will be cleared through the overnight and into the next day - if people continue to follow travel bans and stay off the roads.”

“Currently, there are no reported power outages in Erie County. Thank you for being great community members, and keep checking on your neighbors.”

“The southern parts of the county along the Lake Erie, near Evangola State Park, etc., remain the only Erie County roads that haven't been reached by @ErieCountyDPW yet. Commissioner Geary says crews are working that beat now.” 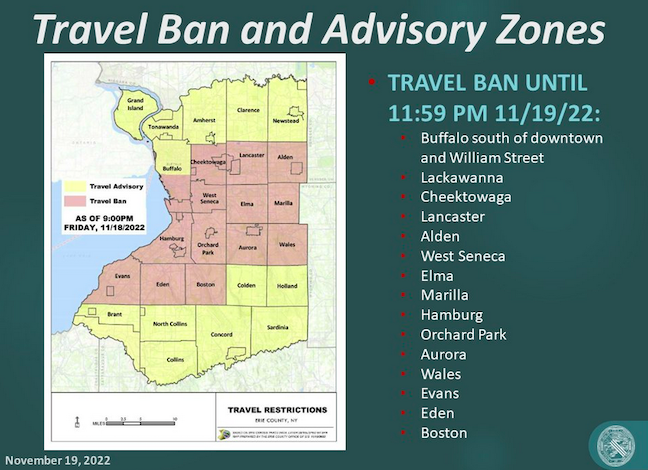 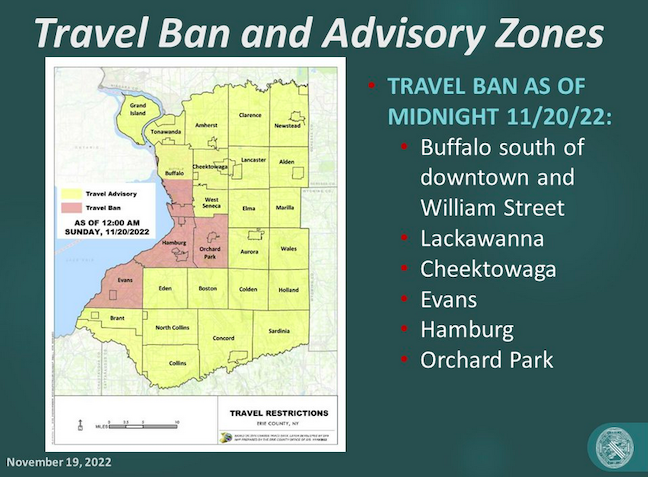 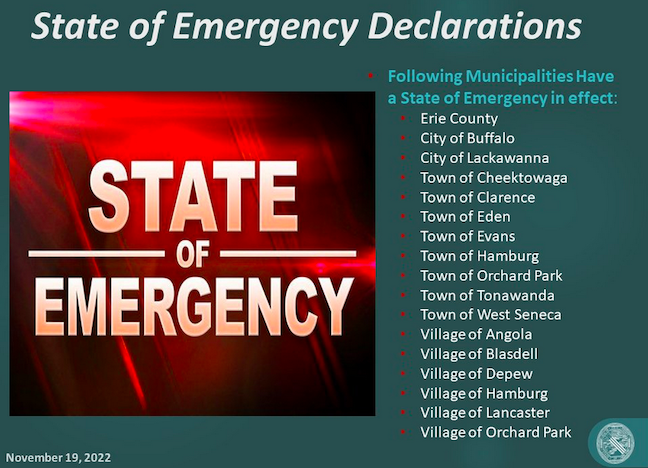 The county executive’s team added, “Effective midnight tonight (Sunday, November 20 at 12:00 a.m.), Erie County will update the list of travel restrictions for municipalities in the region.

“The City of Lackawanna, the City of Buffalo south of William Street and the towns of Hamburg, Orchard Park and Evans will continue to have a driving ban until further notice.

“County officials are urging all residents to follow these travel restrictions to prevent additional blocked roads from vehicle accidents or stranded vehicles and also to help allow snow removal crews, tow trucks and first responders to complete their work. 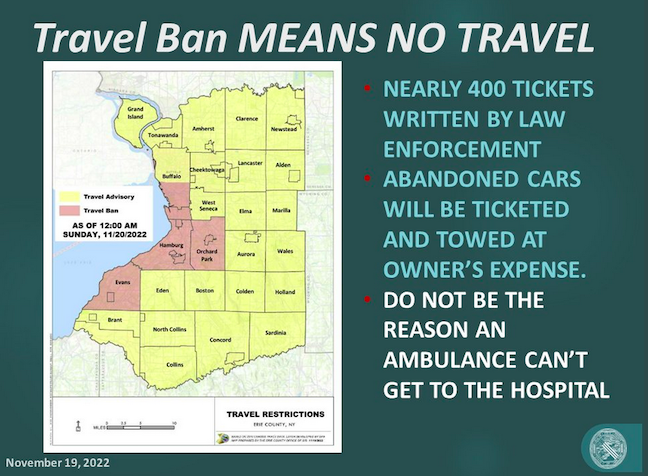